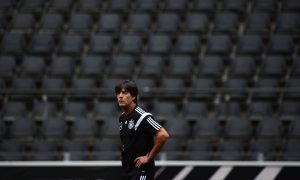 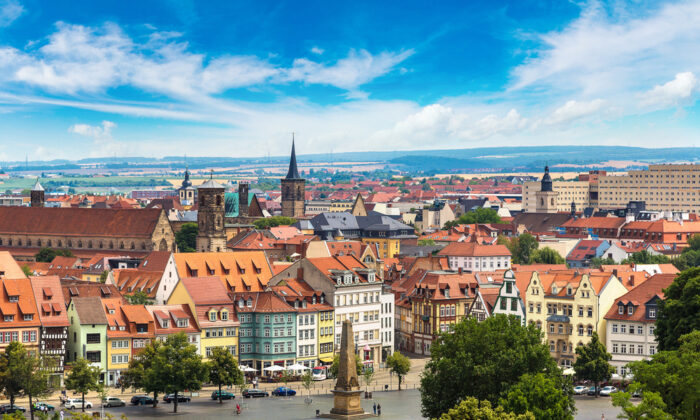 A view of Erfurt on a summer day. (Shutterstock)
Destinations

30 years after the fall of the Berlin Wall, these former East German towns are thriving and welcoming visitors
By Janna Graber

Kneeling next to him, I see the creature is almost three feet tall, and his eyes seem to bore into mine. Though this tattooed figure of Captain Hook is a puppet at Theater Waidspeicher, he moves with lifelike intensity under the skillful hands of his puppeteer-actor.

Theater Waidspeicher is a German puppet and figure theatre in Erfurt, the capital city of Thuringia, a state in the heart of Germany. Thuringia is filled with beautiful countryside and historic cities that have produced some of the world’s top musicians, artists, thinkers, and theologians.

The region once belonged to East Germany, and the DDR, as it was called, had its own unique culture and forms of art. One popular form of entertainment was puppet theater. With government support, puppet theaters created works for adults and children.

Today, some of these treasured theaters have survived and thrived, such as Theater Waidspeicher, which maintains a full schedule of performances. It even has a department of puppet creators, and puppet artists can still be found throughout eastern Germany.

It’s just one vestige that has remained in the sea of change since reunification.

A World of Change

It’s been 30 years since the world watched in awe as East Germans poured through the Berlin Wall on November 9, 1989.  For me, it was especially poignant.

In 1987, I was a study abroad student in East Berlin. The gray buildings, strict government oversight, and empty shelves of East Germany had been a shock for me, a 20-year-old kid from the American West, but I’d come to appreciate the people and their tenacity.

I was filled with joy watching Germany begin its whirlwind journey toward reunification, and I’ve been back many times, watching the country slowly change. When I first went back in 1993, former East German towns were struggling.

But that was then, this is now.

Today the towns and cities of eastern Germany are thriving. In fact, from 1993 to 2018, international overnight stays in the former East German states increased six-fold from 3.4 million to 20.5 million.

Looking around, it’s easy to see why. Historic buildings have been carefully restored, and the streets are lined with bustling restaurants and thriving small businesses. Flower boxes adorn the windows of freshly painted buildings and storefronts. Farms and vineyards are back in the hands that once owned them, and industry is booming.

Walking down Krämerbrücke (Merchant’s Bridge), the city’s iconic medieval bridge lined with homes, shops, and restaurants, I stop in at several artisan shops. I watch Martin Gobsch carefully carving a wooden puppet in his studio, while fabric artist Rosanna Minelli shows me her beautiful indigo scarves at Erfurter Blau.

Erfurt is an unhurried, walkable town, and around every corner, I’m treated to tidy cobblestone streets lined with half-timbered buildings. I head toward the stately St. Mary’s Cathedral, which stands next to the gothic Church of St. Severus.

Martin Luther studied in Erfurt and was ordained as a monk here in 1507, setting in motion a life that would eventually lead to the Protestant Reformation. Walking in his footsteps is a moving experience.

Later in the day, I learn more about Erfurt’s recent history. The Memorial and Education Centre Andreasstrasse looks at the region’s past in East Germany. Housed in a former prison of the Stasi, the East German Ministry for State Security, this museum and educational center tells of Erfurt’s communist days through the personal stories of locals who were imprisoned in the structure.

The prison cells, filled with photos and exhibits, show how citizens were controlled, even told where to study and what job to hold. Some lost their farms or businesses, as they were given to state collectives.

One exhibit tells the story of teenage boys who were arrested for painting some humorous graffiti. They were around my age when I studied in East Germany, and their story hits home. I realize that many here still carry scars from that time, although life has moved on. Germany today is a whole different world.

During my last evening in Erfurt, I join residents at an evening performance of The White Rose, performed on the steps of St. Mary’s Cathedral. The annual DomStufen Festival offers outdoor theater on the church steps, including an afternoon performance for children.

Trains are my favorite way to travel in Germany, as they are reliable, simple and affordable. Erfurt was just a quick 45-minute train ride from Frankfurt, and that next morning, I take another train to my next stop, Weimar.

Back in 1775, Weimar gave birth to German Intellectualism, with the likes of Goethe, Schiller, Nietzsche, and Liszt all calling the small city home. It was an exciting time for this region of the country. Then in 1919, the Weimar Republic and constitution were formed. Weimar enjoyed its place in the limelight.

The decades that followed were difficult, with two crushing world wars and then years of Russian occupation. But when the Wall fell, all that changed. Weimar seemed to find itself once again.

Gradually, intellectual and artistic thought seeped back into its rightful place in the city. The last 30 years have been filled with rejuvenation, creating a vibrant town that treasures its past, but looks forward to the future with gusto.

That lively spirit is easily felt on the streets of the city. The attractive Schiller Street, a pedestrian shopping zone, and the market in the town square all bustle with activity. The local theater, which was once used by the Nazis as an armament factory, has been reclaimed for the town’s 400-year-old orchestra. Art galleries and museums dot the avenues, as do excellent restaurants and pubs.

Weimar is home to several top museums, including the new House of the Weimar Republic, which opened in July 2019.

Eisenach: In the Footsteps of Martin Luther

Hopping back on the train, I’m off to Eisenach that next day. Founded in the 12th century, this slow-paced town has a population of only 44,000. Yet its residents have made a huge impact on the world.

It was here that Martin Luther preached and translated the New Testament while living at Wartburg Castle, which was founded in 1067. Even today, the castle, a UNESCO World Heritage site, remains the town’s very heart.

As the Wartburg Castle tour guide takes us through its rooms, we hear stories of Elisabeth of Hungary, a young princess who worked tirelessly for the poor during her years at the castle. Eventually we stop in the castle’s most famous room, the small space where Martin Luther hid and worked in 1521. During that time, he translated the Bible into German that common folk could understand.

Standing in the historic room, it’s easy to imagine the man who would change the course of history. The room has attracted thousands of visitors over the centuries.

From the castle hill, I follow in Luther’s footsteps down the mountain on the Luthererlebnispfad, a trail that wanders pleasantly through the woods back to town.

Not content with helping to change the course of Christianity, Eisenach produced another master—Johann Sebastian Bach, who was born here in 1685. The Bachs were well-known about town, as Johann and other members of the Bach family sang at St. George’s Evangelical Lutheran Church. Their legacy is still seen all over Eisenach.

The family home, The Bach House, has an impressive collection of instruments and Bach history. The exhibits are well done, but the most enjoyable experience is listening to a local musician play Bach’s work on the original instruments from that time period. His passion for Bach’s work is contagious.

On my last night in Eisenach, I head to Lutherstube in Hotel Eisenacher Hof. This restaurant recreates the experience of dining during Reformation times. I find the tables set with earthenware and the rooms lit with candles. Jovial staff in medieval costumes serve us. A minstrel, who turns out to be the co-owner, strums his lute and sings as we dine on a seven-course meal.

I’m dining alone, but soon feel part of a group made up of visiting Swedes and Germans. We’re all wearing bibs, drinking wine from horns and earthenware cups, and it’s easy to talk at such times. The three-hour affair is entertaining, and the staff are still joking with me when I walk to my hotel at night’s end.

With so many of the world’s struggles today, it’s easy to forget to celebrate when things go right. In Germany, many things have gone well over the last 30 years. Thuringia, I’ve learned, is living proof.

The author was a guest of the Thuringia Tourist Board.