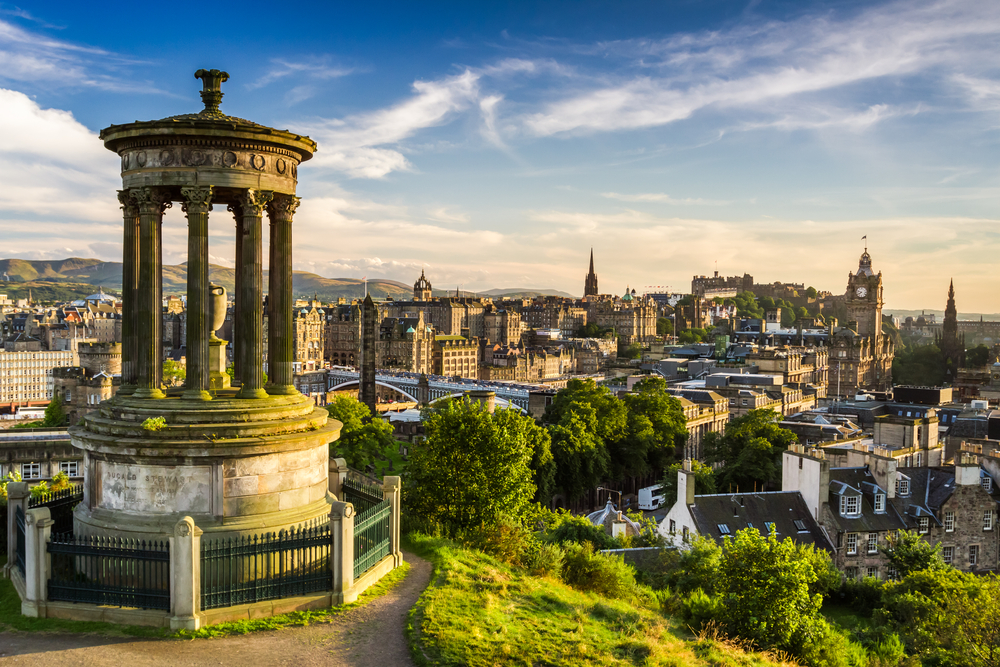 Edinburgh is famous for the annual Festival Fringe and the seat of Scottish Parliament, but what does it offer the visitor?

It might be the capital of Scotland, the home of vibrant festivals and the seat of Scotish power, but there’s something about the cold cobbles, the wind-battered stones and the towering castle that make Edinburgh still feel like a haunted fortress atop an enchanted mountain.

Tourists duck and dive under towering bridges, they tumble down treacherously steep steps and feel the wind whip their noses and cheeks as if they were standing on the battlements.

Locals are fiercely protective of their city, as if they were guarding hidden treasure. But look hard enough, and you can find the city’s secrets, its boutique shops, it’s achingly hip restaurants, its enchanting walks and cosiest whiskey joints.

MUST STAY: For a taste of heritage and luxury, try The Scotsman Hotel. This 5* hotel is located at Edinburgh’s historic North Bridge and was built in 1905 as baronial office of the Scotsman Newspaper. You can get a Weekend Special Offer, with a double room (flowers and champagne included), 3 course dinner, full Scottish breakfast and full use of the spa and health club at £225 for a Sunday-night stay.

MUST VISIT: Perched on an extinct volcano, Edinburgh Castle dominates the city’s skyline and the 16th century building is Scotland’s most popular tourist site. You’ll have to book months in advance to see the famous Scottish Military Tattoo, and extravaganza of fireworks, pipes and dancing at the castle. But for a peek at the ordinary lives of citizens of Edinburgh, Real Mary King’s Close is a hidden treat, just off the Royal Mile. Venture underground to a secret warren of hidden 17th century streets, led by a character from the period. See how residents suffered from the plague, wicked deals and murderous plots that took place in the shadowy close. The museum is a treat for children, fascinating for adults, and a warm and welcome respite if the Scottish heavens have opened.

MUST BE SEEN AT: Edinburgh’s hippest restaurants and bars are mostly in the New Town, close to Princes Street. But one exception is the swanky Ondine, an award-winning fish restaurant just a short skip from the Castle. The glass-fronted upstairs restaurant is perfect for people watching, while supping an Edinburgh Gin Daisy cocktail.

Fresh, local and zingy fish dishes change regularly, but might include Ondine smoked salmon with homemade cucumber pickle, silky fish soup with gruyere crotons, or a moist and smoky grilled seabass. Begin or end the evening next door at the fashionista-dominated G&V Royal Mile Hotel (formerly Hotel Missoni) for their signature draught Prosecco.

MUST DRINK: Every bartender is an expert in Scotch whisky. If you fancy being one yourself, take the tour at The Scotch Whisky Experience, beginning with a virtual tour inside a whisky barrel, showing you have to amber liquid is distilled and matured. Later, you’re given a sniff of the different flavours of the Scottish whisky producing regions, to help you decide whether to sample Lowland, Highland, Speyside or Islay dram. The museum also includes a fascinating display of the world’s largest collection of whiskey.

MUST SHOP: In the heart of the Old Town, Edinburgh’s Grassmarket district has the city’s best independent merchants, designers and artisans. Wind your way down the Castle Wynd or Upper Bow steps and spend an hour browsing the delis and boutiques. Highlights include Demijohn’s handmade spirits and liquors, Armstrong’s Vintage clothes emporium for ’50’s ra-ra skirts, 60’s minis and 70’s prints, and the Old Town bookshop, for antique books, maps and prints.

MUST EAT: One of the city’s most up-and-coming districts, and home of the Royal Yacht Britannia is Leith, Edinburgh’s port. On a sunny evening, young professionals and artists fill the quayside bars.

Copyright © 2014 by The Travel Magazine. This article was written by Sharron Livingston and originally published on Thetravelmagazine.net

*image of Edinburgh via Shutterstock