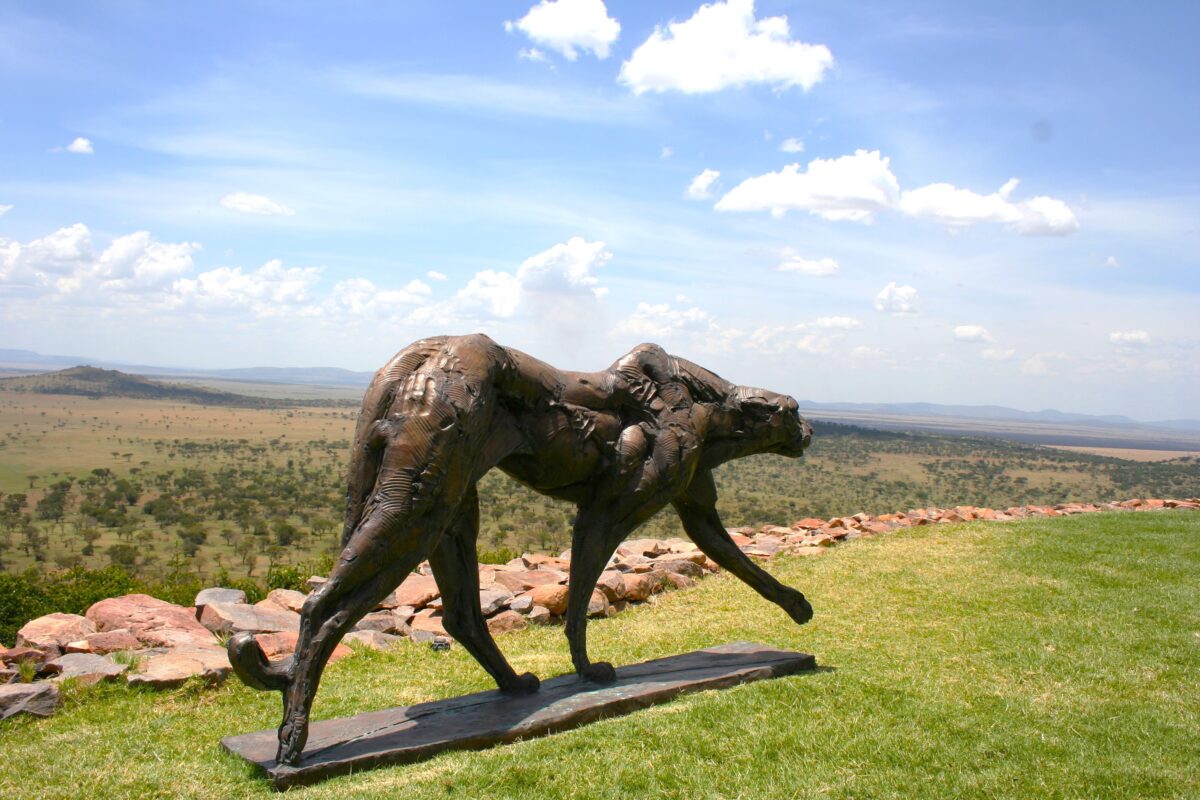 The view seems to go on forever from Singita Sasakwa Lodge, atop Sasakwa Hill in the Grumeti Game Reserve that is part of the Serengeti-Masai Mara ecosystem. The wildlife-filled reserve is home to Cape buffalo, rhino, elephant, lion and leopard, Africa's so-called Big Five. (Mary Ann Anderson/TNS)
Travel

The late afternoon light is fading fast, and with the dust kicked up by the Land Rover catching the low rays of the sun, the terrain of trees, rocks and acacia-flecked hills of the Singita Grumeti Game Reserve seemed cloaked in gold. Maybe that’s why I missed seeing a pride of lions, more than a dozen strong, lethargically lounging in the grass in the pitiful shade of an umbrella tree, their tawny coats blending in perfectly with the ocherous landscape.

Although felines are masters of disguise, their camouflage couldn’t escape the absurdly sharp eyes of my guide Arnold. Driving past the stand of umbrella trees, all I saw was a pile of golden rocks when Arnold punched hard on the brakes of the Land Rover and said softly, his voice hardly more than a whisper, a single yet profound word, “Lions.”

The “rocks” yawned and groaned and stretched, rolling over and over one another like a litter of lazy puppies might do.

The pride is gorgeous, breathtaking even, and Arnold and I watch them for long minutes until the sun grows darker behind the hills. When nightfall is inevitable, it is time to leave, but I keep my eyes on the lions as we bump along a deeply rutted road. We aren’t far away from the pride — I still watch them as we drive away — when from beneath the Land Rover comes a clunking-thumping-flapping sound. In the middle of the Tanzanian bush, within ear- and eye-shot of a pride of man-eating lions, and with tsetse flies buzzing all around, the Land Rover gets a flat tire. Arnold does the right thing, of course. He keeps driving for as long as he can on the flat so that we are safe from the clutches of the lions. It’s not his first flat tire rodeo, so to speak, and we’re back on the road in no time at all.

I am at the 350,000-acre Grumeti Game Reserve, situated adjacent to Serengeti National Park. Grumeti is an integral part of the Serengeti-Masai Mara ecosystem, the fabled, mystical land that is home to the annual grazing cycle of the Great Migration, oftentimes called the Great Wildebeest Migration. Grumeti is in the heart of the Serengeti, a Maasai word meaning “open plain.” The migration across the plains takes place from about July until October when millions of loudly grunting, snorting, bellowing wildebeest storm the Mara from the Serengeti in search of lush, sweet grass required for their survival. Thousands of zebra and impala escort the wildebeest on their sojourn, mixing and mingling like a fantastic naturally orchestrated circus. The raucousness reverberating from the animal-crammed savanna is truly unforgettable.

I am in Tanzania for a few days on my own before I fly to Nairobi to lead a women-only group of adventure travelers farther northward in Kenya. Tanzania, in East Africa on the Indian Ocean and encompassed by geographical treasures of the Serengeti, Ngorongoro Crater, the Selous Game Reserve, Ruaha National Park, Mount Kilimanjaro, Lake Victoria, Lake Tanganyika and Lake Malawi, is a melding together of Tanganyika and Zanzibar. The two united in 1964 to form the United Republic of Tanzania.

At the urging of a friend who had traveled all around Tanzania, I stayed at Singita Sasakwa, a beautiful, stately lodge that recalls the safari experience of the early part of the 20th century. Think: Karen Blixen, Denys Finch Hatton, Col. John Henry Patterson and Ernest Hemingway, although the latter didn’t visit Africa until the 1930s. While Singita has several more lodges in Grumeti, including Faru Faru Lodge, Sabora Tented Camp, Serengeti House and Singita Explore, I chose Sasakwa because of its venerable location high atop Sasakwa Hill.

I love the sounds and spectacular views of Africa, and from Sasakwa I believe with all my heart that I can see past the horizon and all the way to the beginning of mankind. In all that vastness, that deep sense of isolation, time really does stand still, and I think this unending landscape must look the same now as it did a million years ago. Never before nor since have I been witness to such a spectacle, and within the first hour of my arrival at Sasakwa, from far below, in the grasslands sparkling under the African sun, I hear elephants trumpeting, their deep, throaty voices crystallizing the savanna and quieting down every other living thing to an utter standstill. It is marvelous, this absolute quiet, broken only by the wind and the thunderous hullabaloo of the elephants.

Sasakwa is the most beautiful, romantic lodge in which I’ve ever stayed, and I wished a million times my husband were there to share it with me. But husbands don’t belong on all-women trips, so he sat this one out. The sense of grandeur of Sasakwa is evident. The main lodge and its surrounding cottages are built in the style of Edwardian manor houses, as you might expect of colonial East African, but with typical tribal influences in the décor of cushions, wall hangings and carvings of African wildlife. It’s all blended together with touches of four-poster beds, rich woods and imported chandeliers. Each cottage features a private infinity pool dripping over the edge of the bluff, and since I was coming to Africa, I didn’t once think of packing a bathing suit with the khaki safari pants. One look at the inviting pool, glittering like diamonds in the afternoon light, and I instantly regretted my oversight.

Gazing out over the Serengeti during breakfast each morning, I hear the dawn chorus of a million songbirds, of hornbills and doves and go-away birds and bulbuls. Everything is green and lush after seasonal heavy rains. From the top of Sasakwa Hill, it looks as if the herds haven’t fully awakened yet, but I know the cheetah, lion and leopard are on the prowl anyway. During the night, I had heard jackals and hyenas outbidding one another to determine which was the loudest.

Each morning and evening of my short Sasakwa stay, Arnold and I hunt —with a camera, of course — and find leopard, lion, elephant, rhino and birds of every feather. But oftentimes we just stop, listen to the Serengeti wind whipping all around us and take in the incredible scenery. As I do every place I visit for the first time, I approach Grumeti and the Serengeti with a sense of wonder and awe, as a child would do, and when it was time to leave, I was not disappointed.

One- to four-bedroom cottages are available. Current rates at Singita Sasakwa begin at $2,100 per night, per person, but regular promotions are offered. The rate includes accommodations, all meals and beverages including wines, spirits and liqueurs (but excludes French Champagne), twice-daily game drives in open game-viewing vehicles, return road transfers between the Sasakwa airstrip and the lodge, telephone calls to the U.S., laundry service and Wi-Fi. Grumeti Air offers daily direct flights from Arusha to Singita Sasakwa via Kilimanjaro. Visit www.singita.com for more information.