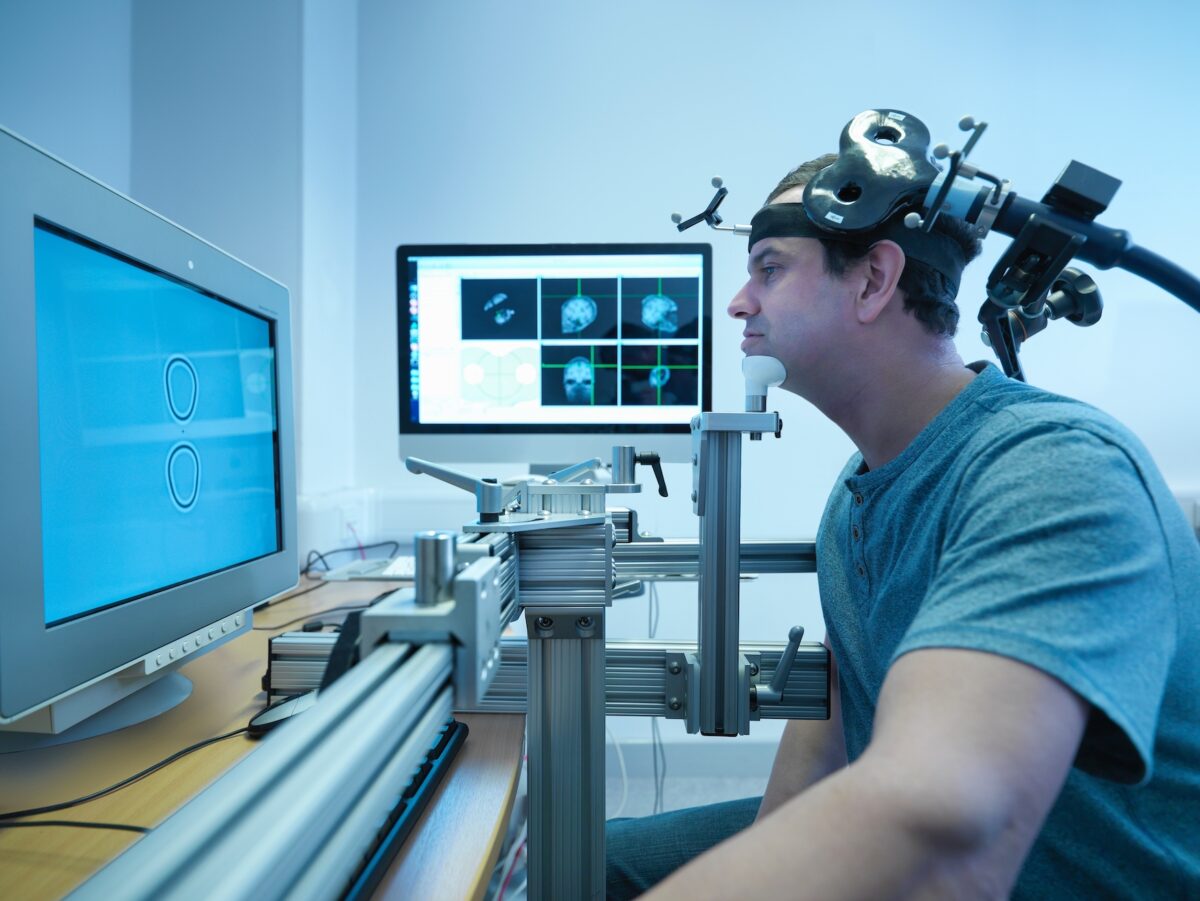 For those unable to resolve their depression through other means, an electromagnetic coil placed on their head may offer relief. (Image Source Trading Ltd/Shutterstock)
Wellness

This unique, drug-free treatment stimulates the brain's neurochemistry and gets results
BY Jennifer Margulis TIMEJanuary 4, 2022 PRINT

A young person I know felt so depressed that she thought about ending her life every day. She planned how and where she would crash her car and fantasized about putting on dark clothing and walking onto the highway at night so a driver would hit her. She felt anxious and hopeless, certain that she knew she would never feel happy again.

The only thing that kept her from dying by suicide, she told me, was the thought of how devastated her mom, dad, and younger brother and sister would be.

She sought help: Under the supervision of a psychiatrist, she tried several different anti-depressants to help alleviate the depression. But while each seemed to work for a little while, after a few short months, the familiar and devastating sense of hopelessness would start to overtake her again. Finally, the psychiatrist she was seeing recommended she try transcranial magnetic stimulation to treat her depression. At that point, she was willing to try anything.

According to the Anxiety and Depression Association of America, depression now affects some 40 million adults in the United States, or 18 percent of the population. While depression was a problem before the global panic about COVID-19, there’s no question that it has gotten worse since. Isolation and loneliness, which have both risen drastically during the pandemic, lead to depression, as do financial difficulties, lack of employment, dealing with loved ones being ill, and death.

Prescriptions for antidepressants have been rising since the beginning of the pandemic, according to Dr. Stephanie Collier, an instructor in psychiatry at Harvard Medical School. Reports of domestic violence have also increased, and more young people than ever before have been feeling suicidal, attempting suicide, or taking their own lives.

No one is sure, but it may also be that COVID-19 infections themselves are having an effect on people’s mental health. One study of 62,354 people who had a COVID-19 diagnosis, published in November of 2020 in the scientific journal The Lancet, found that survivors of COVID-19 were at higher risk of psychiatric disorders.

In another, more recent study, published in Nature, a team of 23 scientists examined the brain tissue from people who died of COVID-19. They found molecular changes in the brain that mirrored changes seen in the brains of people suffering from neurodegenerative diseases.

“Perturbations associated with COVID-19 overlap with those found in chronic brain disorders,” the scientists said, “and reside in genetic variants associated with cognition, schizophrenia, and depression.”

While there was no evidence of the virus itself in the tissue, the scientists hypothesized that COVID-19 infections may cause degeneration in the brain. This may be another reason why so many people are struggling with mood disorders right now.

What Is Transcranial Magnetic Stimulation?

Transcranial magnetic stimulation, or TMS, is a relatively new intervention to treat depression. Used since 1985 for medication-resistant or other treatment-resistant cases of depression, TMS, or repetitive TMS (rTMS) uses magnetic impulses to stimulate the brain. This noninvasive intervention targets portions of the brain that tend to have less activity in a person who is experiencing severe depression.

During a TMS session, the patient is awake. An electromagnetic coil is placed on the patient’s head, usually via a cap or a helmet. The patient sits comfortably in a chair while the coil delivers a painless pulse, which feels like an intermittent tapping or poking sensation. The patient can read, meditate, daydream, or do a crossword puzzle while the treatment is being delivered. It’s also possible to talk during sessions, though most patients opt to wear noise-canceling earplugs to soften the tapping sound from the machine.

The electrical pulse is designed to stimulate the brain to produce neurotransmitters such as serotonin and dopamine that promote a healthy mood and better sleep. While protocols vary depending on the practice, machinery, and the individual patient, treatments for depression or anxiety usually last about 20 to 30 minutes and a patient will usually receive five sessions in a week for four to six weeks.

Dr. Adam P. Stern, in an article about transcranial magnetic stimulation for Harvard Health, estimates that 50 to 60 percent of patients with medication-resistant depression have found a benefit from TMS therapy. Of those patients, approximately one-third reported that their symptoms of depression didn’t return over time. While depression is usually an ongoing and recurring mood disorder, most patients who found TMS to be helpful experienced improvement for several months to a year after the end of the treatment, Stern wrote.

“I was going to die,” Emma (who did not use her last name for privacy reasons) told KQED. “It saved my life, and I’ll be forever grateful.”

Several peer-reviewed scientific studies have found TMS to alleviate symptoms of depression, including a 2019 review published in the journal General Psychiatry. Though some of these studies are industry-sponsored, TMS seems to be an effective clinical tool. It’s also being used to help treat symptoms associated with epilepsy and autism.

It felt life-saving for my young friend. She was grateful to have someplace to go every day during the time she received treatment, and for months afterward, she felt more hopeful and less depressed than she had in a very long time. Though she is still struggling with her mood and her mental health, she told me she felt like the TMS helped.

“I have had patients use it for depression successfully, particularly with treatment-resistant depression,” said Dr. James Neuenschwander, an integrative physician based in Ann Arbor, Michigan. “The primary issue is the cost.”

Neuenschwander said that he researched buying a machine for his practice but the amount of money he would have to charge his patients made it cost-prohibitive. While some insurance companies will pay for treatments, patients report up to $150 in out-of-pocket expenses per session.

While Neuenschwander refers patients to a clinic for treatments, he has also had success treating major depression by getting to the root causes. He tries to avoid prescribing anti-depressants because, he said, they lose efficacy after three months.

“At one year they’re no better than exercise or meditation,” he said. “They’re very effective over the short run, they can have a major impact for someone in crisis. But beyond three months, you want to see what else you can do.”

To fix the underlying problems, Neuenschwander said, he examines a patient’s biochemistry and uses medications or supplements to target deficiencies. These include 5-HTP, which helps with minor depression and sleep disorders by supporting the body’s ability to make serotonin and melatonin; the herb macuna, which Neuenschwander says can improve dopamine levels; and lithium orotate, which protects the brain and helps with glutamate toxicity.

Other treatments for more mild depression include counseling and talk therapy, mood-enhancing dietary changes, daily exercise, massage, and acupuncture. However, according to The American Journal of Psychiatry, half of the people suffering from depression have treatment-resistant depression. For some of those patients, TMS may be a lifesaver.

Jennifer Margulis, Ph.D., is an award-winning investigative health journalist and book author. She has worked on a child survival campaign in Niger, West Africa; championed the rights of Christian children sold into child slavery in Southeast Asia on prime-time TV in Paris; and taught post-colonial literature to non-traditional students in Atlanta. She is the author of “Your Baby, Your Way,” and co-author, with Dr. Paul Thomas, of “The Vaccine-Friendly Plan” and “The Addiction Spectrum.” Learn more at her website: www.JenniferMargulis.net