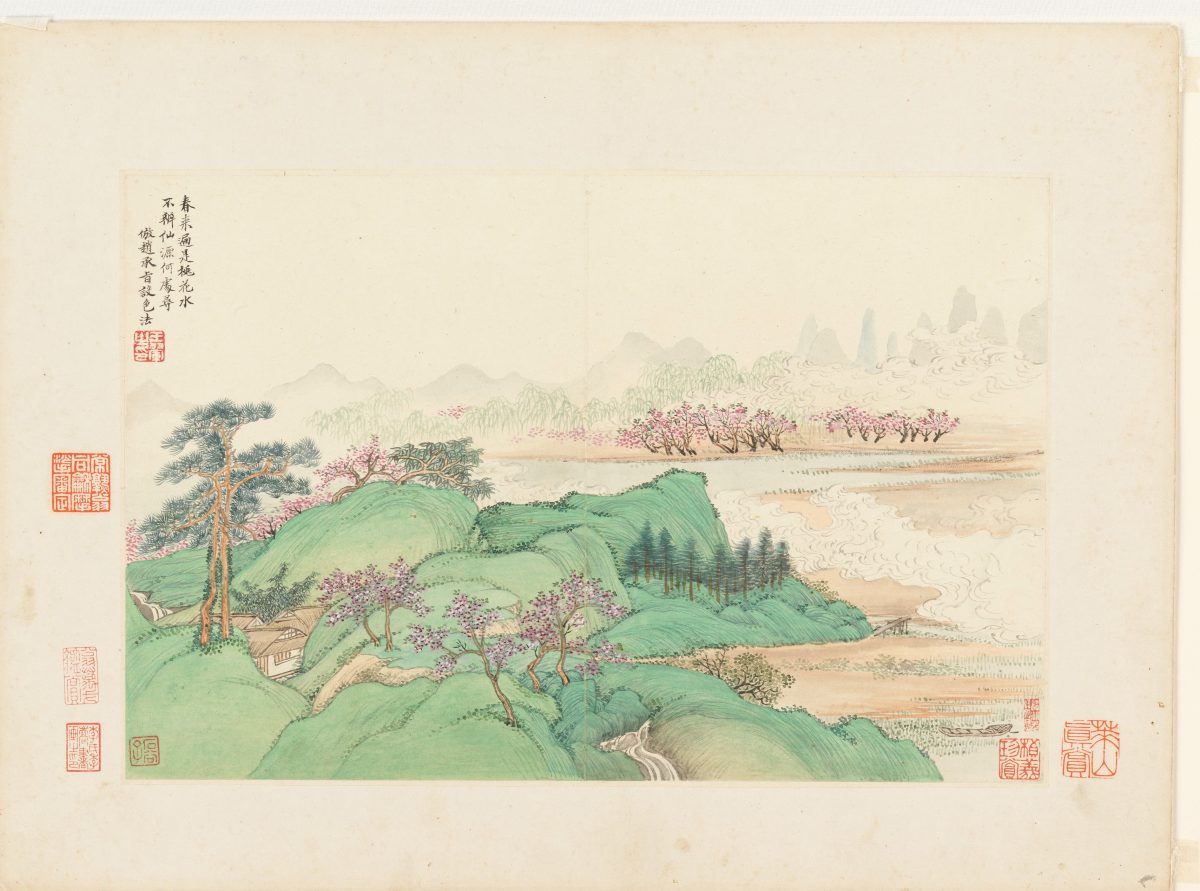 You ask me why I dwell in the emerald mountains.
I smile and make no reply, my heart at ease.
Peach blossoms flow downstream on the water, vanishing without a trace.
It is another realm, beyond the human world.

—Li Bai, one of China’s most celebrated poets

For centuries, the Chinese have exalted and reveled in beautiful landscapes. Ancient China was a land where human and divine coexisted, where Daoist immortals wandered mist-shrouded mountains, and spiritual practitioners meditated in deep caves.

The natural world, with its lofty mountain peaks, trickling streams, and rushing waterfalls, was not merely a source of beauty. It was a place where one could elevate the mind and the spirit and free oneself from the entanglements, follies, and excesses of human society.

Landscapes permeated almost every realm of Chinese art, from paintings to porcelain vases. In the realm of painting, the Chinese have traditionally revered landscapes over all other painting styles. In these vast landscapes, humans are depicted as minuscule figures—humble and reverent participants within the flow of larger forces.

Dozens of such exquisite works of brush and ink are now on view at The Metropolitan Museum of Art’s exhibition “Streams and Mountains Without End: Landscape Traditions of China,” which is now in the third of its four rotations. Its curator, Joseph Scheier-Dolberg, wanted to showcase the diversity of this seemingly monolithic and impenetrable art form by breaking it up into nine different themes. One gallery showcases works emulating the works of old masters, one gallery evokes historical legends, and another gallery points to the intimate relationship between Chinese poetry and painting, with one often mirroring the other.

The exhibition draws from The Met’s holdings of 2,000 works of painting and calligraphy, and also features a dozen private loans. “Even visitors that have been coming here again and again and know the collection really well—I think they will find some surprises,” Scheier-Dolberg said. Some of the paintings have not been exhibited at The Met in years, and one is appearing for the first time, a century after it was first acquired by The Met.

Landscapes materialized as an independent genre in Chinese painting during the later years of the Tang Dynasty (619–906). Over the centuries, it has blossomed into a rich and multifaceted artistic tradition.

The primary forms of landscape paintings are the hanging scroll, the handscroll, and the album leaf. The hanging scroll hangs on a wall, suspended by a silk string, while the handscroll is typically rolled up, stored in a box, and only intermittently unfurled to be appreciated. A handscroll could span the length of an entire room, but nonetheless, it was traditionally viewed with only one arm’s length visible at a time.

Handscrolls invite viewers into the scene to stroll on the curved paths alongside the small figures, who are dwarfed by the surrounding landscapes. In The Met’s “Views of Nanjing in the Four Seasons,” a breathtaking 38-foot-long masterpiece, the painter Wei Zhike used the brush modes of various old masters to subtly bring viewers through the seasons and past famous sites in Nanjing.

Much of Chinese landscape painting is filled with common symbols or allusions, recognizable nowadays only to those more familiar with this art form. Paintings inspired by the Orchid Pavilion Gathering often depict a group of scholars sitting along the banks of a stream. As the story went, at a spring purification ceremony in the fourth century, literati gathered to play a drinking and poetry game. Cups of rice wine were floated down the winding stream, and whenever a cup stopped in front of someone, he had to drink the wine and spontaneously compose a poem. By the end of the day, the scholars composed over three dozen poems.

Among the most common symbols in Chinese landscape painting is that of the recluse—typically rendered in paintings as a lone man surrounded by nature, fishing on a boat, reading in seclusion, or gazing at a waterfall. In Chinese history, it was common for scholar-officials to retreat from society and political life, especially in times of political turmoil or pervasive corruption in the declining years of a dynasty. Away from the dusty, human world, they cultivated themselves and lived a peaceful life devoted to scholarship and art.

Painting in China was not the exclusive domain of professional artists. Beginning in the Song Dynasty (960–1279), a new class of scholar-officials also extensively studied the arts, including painting, poetry, music, and calligraphy. Confucians believed that art aided moral cultivation. The quintessential scholar epitomized both inner virtue and outward refinement, reflected in his artistic skill.

Like other Chinese arts, Chinese painting emphasizes “yijing”—the feelings and meanings evoked by a work of art. Taken literally, yijing means “the realm of meaning.” It is an artistic space that exists beyond the physical lines and contours rendered on paper or silk.

An artist’s brushstrokes were a window into his spirit, his emotions, and his worldview. It was an “imprint of the mind,” Scheier-Dolberg says. “Like calligraphy, this is an art that can really tell you about the person, and that can be truly, deeply expressive.”

The natural scenery depicted in a painting thus became the medium through which artists expressed their innermost feelings. And it gave them the greatest joy when they met someone who could interpret their art and share in their feelings.

At first glance, a Chinese landscape painting may appear to be a simple collection of mountains, trees, and rocks. But hidden within it is likely something deeper, something intricate and profound. “It’s one of the joys of this tradition, that you can spend your whole lifetime studying it and still be learning things at the end,” Scheier-Dolberg says.

Irene Luo
Irene is the assistant producer for American Thought Leaders. She previously interned for the China News team at the Epoch Times. She is a graduate of Columbia University with a degree in Political Science and East Asian Languages and Cultures.
SHARE
Friends Read FreeCopyFacebookTweet
SHARE
Friends Read FreeCopyFacebookTweet
You May Also Like