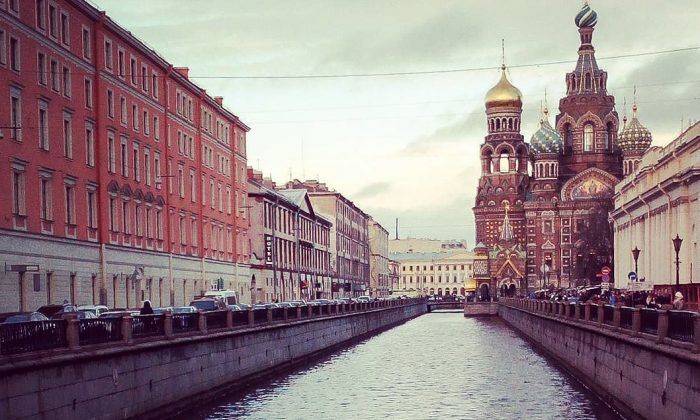 By Train from St Petersburg to Hong Kong (1)

The journey on the legendary Trans-Siberian Railway is one of the greatest travel adventures of our age. The Trans-Siberian Girl is traveling on the world’s longest train ride from St. Petersburg, Russia to Hong Kong.  The travel from West to East took her to various places across Russia, Mongolia and China, a journey of over 10,000km. Read below about her tips, advice and stories on making the trip of a lifetime possible.

Ever since I was a child, I dreamed of taking the Trans-Siberian Train.

There were many questions and concerns coming from my family and friends before going. ‘Why are you taking the Trans-Siberian railway alone, in winter time?’ and also ‘It’s too dangerous now!’ The Trans-Siberian is still on the top of the bucket list of many travelers and remains a lifeline for millions of Russians.  Personally, I always had a fascination for train rides but the simple answer was, that there is a certain mystery about riding the world’s longest and oldest railway in the largest country in the world. It isn’t only a triumph of engineering but a view into another world of the perhaps one of the most mysterious nations in the world.

The Trans-Siberian was built between 1891 and 1916 under the supervision of Russian government ministers personally appointed by Tsar Alexander III. There is a lot of history, sweat, blood, tears and even death that were left on the train path by the workers completing the route that connects Moscow with the Russian Far East.

It was only natural that I wanted to see the country that offers 11 time zones and experience what it was like to spend time riding in the train for days and nights at a time, visiting places I’ve only read about. Alone, the word ‘Siberia’ makes a lot of people anxious and they think of cold, snow and the movies about escaped prisoners from the Gulag camps.  So there I was, packing my backpack and small suitcase that contained mostly instant soups and noodles for the train ride, for what was to be my journey of a lifetime – and it certainly was.

I wasn’t really sure what to expect when I landed in St. Petersburg for the first time. I actually didn’t really have a plan.  It all happened so fast. I found a Russian Agency in Munich, Germany that provided me with a Moscow invitation letter and then the next day I got my visa and booked my flight to St. Petersburg, one way and without a Trans-Siberian ticket for the train. I didn’t even know where I was going to stop on the way and which route I would take. All I knew was that I wanted to reach Beijing first and stop over in few places on the way. So there I was, first time in St. Petersburg and on my way from the airport, got out at the wrong bus station. Never mind though, I tried to ask around where exactly I was and soon found out that English isn’t necessarily the best-understood language to use in Russia. My Slavic language skills took me further and so I a young friendly boy showed me the way inside the underground station and offered his help.

I found myself riding down the escalators in Admiralteyskaya station, the deepest subway station in Russia. With the typical platform lying 187 feet below ground, St. Petersburg has the deepest subway system in the world. Russia’s second-largest city after Moscow, with an important port on the Baltic Sea, has approximately 5 million people.

St. Petersburg was the capital of Imperial Russia until 1918 when the central government moved to Moscow. Still until this day, it remains the cultural capital. From the many museums and art galleries to concert halls, in the short time I was there, I was able to experience the thriving arts and culture scene of the city. With it’s many water ways, bridges and channels, no wonder they call St. Petersburg, the Venice of the North. The former capital was and remains one of the treasures of world art and one of the most beautiful cities in the world. After rushing around and trying to see most of the sights the city has to offer, it was time to plan my next move.

There are three ways of getting to Beijing from Moscow.

– The original Trans Siberian that goes from Moscow to the Pacific terminus of Vladivostok (9,258km/6,152 miles) and takes seven nights.

– The Trans-Mongolian that goes to Beijing via Ulaanbaatar, Mongolia (7,621km/4,735 miles) and takes six nights.

– The Trans-Manchurian that travels through Siberia and Manchuria in China to Beijing (8,986km/5,623 miles) and takes six nights.

Although I’ve never been to Mongolia and didn’t have a visa, I decided that it would be good to see another country on the way to China and if possible I would apply for a visa somewhere along the way in Siberia.

After two days of St. Petersburg I bought my ticket with greatest convenience online (http://pass.rzd.ru/), and boarding simply required a passport – the number is recorded at the time the passenger places the reservation. There are several daily trains from St. Petersburg to Moscow and so I took the Sapsan, Russia’s high-speed express train to Moscow (maximum speed of 250 kilometers per hour). The ride on board this modern high-speed train is as smooth as any modern train experience seen anywhere in the world.

Four hours later, and I was in Leningradskaya Station in the heart of Moscow.


First thing I noticed about Russia’s capital is the city’s Metro Stations. With their reflective marble walls, high ceilings and grand chandeliers, they are like a stunning work of art. Walking towards the Red Square and Kremlin, I saw a big crowd in front of the entrance and decided to buy a ticket for what the office lady said is dancing and a singing show. And so I found myself inside the territory of a medieval fortress and residence of the head of the state, watching a national folk performance inside the Auditorium of the State Kremlin Palace.

The State Kremlin Palace is the main stage of the country, one of the best and prestigious theatrically-concert platforms of Russia. Walking through Moscow’s long streets, felt like walking through an art museum. The Russian capital is a dazzling mix of medieval churches, art galleries, nightclubs, Soviet skyscrapers, Lenin statues and sushi bars.

Whilst I was there, one of my favorite things to do was to walk through Gorky Park and a visit to the Fallen Monument Park, a sculpture park with monuments from the Soviet era leaders and laborers. From there you can take a walk or join a boat ride on the Moscow River.

After eating loads of Borsch (Russian soup) and other delicious local food, trying to see the most of the major Moscow sights in just two days, I was too excited about my up and coming trip on the Trans-Siberian, so that it was time to leave Moscow behind and book another electronic ticket for my train towards Siberia. I decided to make a stop in Novosibirsk, Russia’s third largest city and the unofficial capital of Siberia.

Book As You Go – Electronic Tickets for the Trans-Siberian Railway

When you’re on the Russian Railway website ((http://pass.rzd.ru/), you can choose your seat and compartment class. If you travel on the Trans-Siberian railway you will use Russian trains, Mongolian trains or Chinese trains. Trains in Russia, Mongolia and China are very comfortable and usually have 1st, 2nd and 3rd classes.

First Class has two beds in each cabin, 9 compartments per coach. The beds are either in bunk bed upper and lower alignment with a small sofa (on Chinese / Mongolian trains) or two lower beds (on Russian trains). There are 2 toilets one on each end of the corridor and are usually very clean. All compartments are lockable. First classes on the Trans-Siberian train are also known as Spalny Vagon or SV.

Second Class has four comfortable beds per cabin, 9 compartments per coach. There are 2 toilets one on each end of the corridor and are usually very clean. All compartments are lockable. Second classes on the Trans-Siberian train are known as Kupe.

Third Class consists of an open-plan dormitory car with 54 bunks per coach, arranged in bays of 4 on one side of the aisle and bays of 2 along the coach wall. Third classes on the Trans-Siberian trains are known as Platskartny and also have 2 toilets on each end of the corridor, also very clean.

My seat was on the bottom bunk in the third class. It was cold and late in Moscow, almost 11pm when I boarded the Trans-Siberian Express towards Vladivostok.