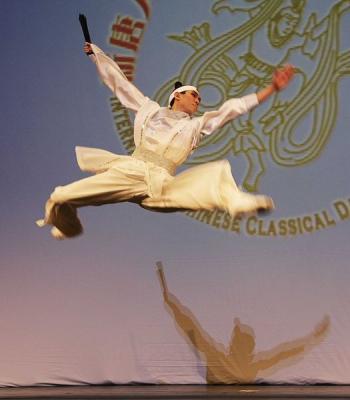 Zhao grew up in the United State, and has learned more about the Chinese culture through the competition. He said that traditional Chinese dance has a lot in common with martial arts. In ancient China, generals used to demonstrate their sword skills at court banquets to inspire the crowd. Zhao began learning martial arts at the age of eight. That’s why he had no difficulty with jumping or tumbling. Instead most of his challenges were in flexibility.

As a member of the Divine Performing Arts, Zhao performed several dances at the Chinese Spectacular, including Herding on the Mongolian Plains, Drummers of the Tang Court, and Chopstick Zest. He said, “One has to feel Chinese dance. I think half of it is the movement, and the other half is the feeling. Feeling is the most important. If you don’t feel the dance in you, then you will definitely fail.” When the music for Herding on the Mongolian Plains starts, what he sees is not the stage or the audience, but a boundless green pasture under the sapphire sky. His movement and feelings are perfectly harmonized.

Zhao thinks that being disconnected from one’s feeling is the most detrimental to a dancer. “Even more important than the physical movements are one’s facial expressions and the soul of the dance shown through the body.” In Drummers of the Tang Court, he intentionally turns his face to the side when hitting the drum in order to exaggerate the sense of tension and power.

Even when doing the same dance over and over again, Zhao thinks that he should do better every time. The choreographer sets the general tone of the dance, but the details require each dancer to explore individually, share with others, and finally form one harmonized group. Zhao said, “I especially like ethnic dances from China, including Tibetan, Mongolian, Uygur, and other styles. They are all different and each has its own flavor.”

Zhao said, “I think this International Classical Chinese Dance Competition is very important. A lot of people have been watching the Beijing Olympics. I watched the opening ceremony and thought their dances were deviated. I hope people who watch this competition can compare which is more appropriate for the Chinese culture, and which is the purest, most beautiful, and genuine Chinese dance.”