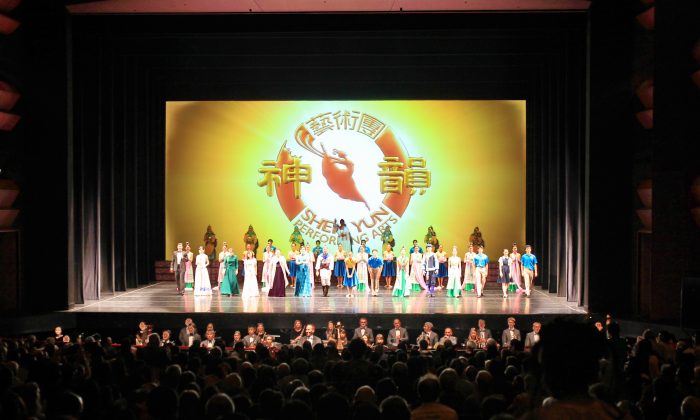 Ms. Bartram is a professional comedian, entertainer, broadcaster, singer, motivational speaker and writer. Her latest book Serious Laughter: A Comedian’s Life in the Celebrity Fast Lane & How She survived it! is soon to be published. Her greatest love is a live audience.

“I love the show, it’s beautiful. There’s something really magical about it. I feel better after seeing it. My energy’s higher and my heart feels better, it’s just gorgeous,” she said. “They’re all working from their hearts. They’ve just got so much commitment.”

Each year Shen Yun tours internationally bringing the essence of 5,000 years of Chinese culture to the stage.

Ms. Bertram was inspired by the performance.

“I feel really energised; the precision of the dancers is phenomenal. The timing, the colours, the strength of the movements, just watching those dancers leap across the stage is extraordinary. It’s absolutely beautiful.”

Based in New York, Shen Yun seeks to revive the ancient Chinese culture that once thrived before decades of suppression by the Chinese communist regime.

“I don’t think anyone has a right to tell us what we can or can’t do with our spirituality. It’s our own heart journey. … And this is beautiful—I mean if this was to perform in China, can you imagine how healing it would be for the Chinese?”

Shen Yun is well known for its unique animated backdrops that transport audiences to another world.

“I mean the colour and the movement –  it transported me. I forgot where I was. I just loved it,” she said.

“I love the little bits of humour in it, there are lots of little funny bits, and I love the screens at the background, I think it’s just a spectacular performance.

‘I really cried because it was so beautiful’

Both Maria Tranchina, professional singer and trainer, and her mother, Alvena Rose Velona, were overwhelmed and truly touched by what they saw on stage.

“Absolutely magnificent—the costuming, the dancing, the feel of the music. The pianist was brilliant and the lady who played the erhu, you could feel the whole music through your body. Just brilliant!” said Ms. Tranchina.

The erhu is 4,000 years old and audiences are often surprised by the expressiveness and powerful emotion conveyed by this two string instrument.

Ms. Tranchina said she had been a professional singer, a contralto, and now does voice training and stage presentation. As a singer, she particularly loved the soprano solo performances.

“The two opera singers were fantastic. Loved it, every bit of it, absolutely magnificent! I’m so pleased I came,” she said.

Ms. Tranchina was equally enthralled with the spirituality displayed throughout the performance. She appreciated the modern heroic tales which gave her more understanding of what is happening in today’s China. It “was brilliantly done,” she said.

Ms. Velona was moved saying, “The singer, the piano player, the dancers—fantastic. … I really cried because it was so beautiful.”

“I felt so honoured to see the show,” she said.