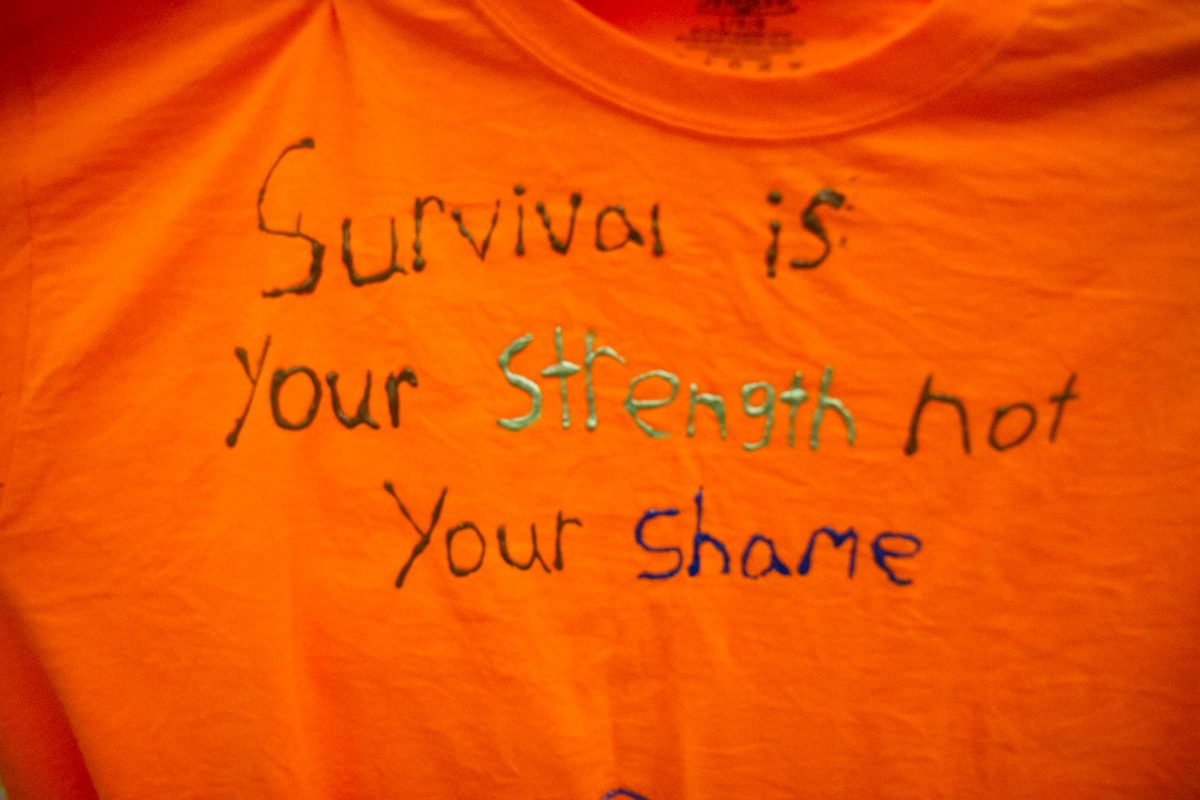 A part of the Clothesline Project that has a message from a survivor of domestic violence and or their loved one at Safe Homes of Orange County in Neuburgh on Oct. 2, 2015. The display was to recognize the beginning of Domestic Violence Awareness Month. (Holly Kellum/ Epoch Times)
Family & Education

Organizations that provide support for victims of domestic violence gathered for the kick off of a collection drive on Sept. 19 at the Monrovia Community Center near Los Angeles, hosted by Kaiser Permanente Baldwin Park. Items being requested included supplies such as toiletries, children’s school supplies, and toys for families fleeing from domestic violence.

Donations can be dropped off at Kaiser Permanente facilities in Baldwin Park, Diamond Bar, Montebello, San Dimas, and West Covina.

According to a Los Angeles Police Department fact sheet, nearly one-third of women who seek emergency care at hospitals were injured due to domestic violence.

One victim named Melissa, who spoke during the press conference at the community center, took her two young children and went to the Young Women’s Christian Association (YWCA) San Gabriel Valley in 2013 for help.

During her 6-year marriage, her husband wouldn’t allow her to work or have friends, so she didn’t have anyone to talk to.

“He took away my phone. He canceled the internet. So, I had no way to reach out to anyone,” she said.

Melissa said her husband also verbally and physically abused her.

“There were a few moments that he would say, ‘I’d rather sit in jail than seeing you with another man,'” she said. “He killed me inside.”

Fortunately, she was able to begin a new life in the shelter and now feels free and confident.

“A lot of emotional diseases or conditions [come from domestic violence], for example, they can lead to depression, anxiety,” said Dr. Victor Cho-Han Cheng, who’s a family physician from Kaiser Permanente.

If depression and anxiety are left untreated, “it can lead to uncontrolled [hypotension], uncontrolled diabetes,” said Dr. Cheng, who helps identify potential victims as a family care provider.

Dr. Cheng uses simple questions such as these to determine whether his patients are domestic violence victims:

According to YWCA, abuse is any controlling, hurtful act, word, or gesture that injures another’s body or emotions.

It’s estimated that 24 people per minute are victims of rape, physical violence or stalking by an intimate partner in the U.S.—more than 12 million women and men over the course of a year, according to the Women’s and Children’s Crisis Center.

The organization suggests those who are currently in an abusive relationship to avoid hiding in rooms with no exits or rooms with weapons when arguments occur. In addition, teaching children how to get to safety, call 911, and give their address and phone number to the police is also very critical.

For those who just left an abusive relationship, they’re advised to change their phone number, get a different cell phone, save any documents or information involving the abuser, and plan an escape route in the house and teach it to the children.

Domestic violence also has an especially considerable impact on children. It’s believed that boys who witness domestic violence are twice as likely to abuse their own partners and children when they become adults.

“If they live in a home where they witness violence, most likely they will become violent in the future. So, we need to educate them so they know how the problem’s solved and they know how to handle situations without resorting to violence,” said Ana Interiano, Chief Program Officer of YWCA San Gabriel Valley.