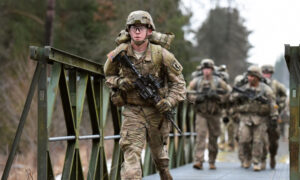 On Jan. 14, an “unknown” soldier passing by a Hope Mills resident’s house noticed that the American flag had come down during a storm and decided to take action.

Frankie Grandstaff, the owner of the flag, wrote on a Facebook post the next day that the flag’s rope had been ripped from the pole during the storm that day. The 45-second video recording shared by Grandstaff, who was at work during the time of the incident, shows the man in uniform respectfully folding the flag in proper ceremonial style and placing it to the side of his front porch.

Alluding to the touching moment, Grandstaff told WTVD: “It was just very cool to see the video and actually seeing it happen at our house.”

Grandstaff, who was completely unaware of the whereabouts of the soldier, praised him, saying that the man wasn’t looking for any attention, nor was he aware of the presence of a camera, but instead just did what he considered right.

He also added that it might not seem like a big deal for many people that the soldier picked up the fallen flag. However, the Hope Mills house owner said, alluding to the soldier, “But, you know, everything that he sacrifices, you know, day in and day out, that’s just the ultimate sacrifice.”

According to WRAL, Grandstaff had the flag at half staff in honor of the paratroopers killed in Afghanistan.

Grandstaff, who moved from West Virginia to Hope Mills in 2016, said that living near Ft. Braggs has made him appreciate the service of the military and the flag a lot more. In a way to show gratitude to those who have been deployed, and to those soldiers in service, he flies the flag.

This particular flag was given to Grandstaff by his mother about half a year ago before the incident.

Acknowledging the gesture made by the unnamed soldier, Grandstaff wrote on Facebook, “This is how important the American Flag is to our Military!!!”

Those who have come across Grandstaff’s video on Facebook were equally moved by the respect the soldier showed the flag.

“This is so moving to me. Our generation was taught to respect the flag. Respect our military and respect our country. What has happened to us,” one social media user wrote. “My thanks to this soldier who honors our country. God bless this unknown soldier. This is what it’s all about.”

Meanwhile, another wrote: “[G]od bless this soldier and the act of patriotism he showed without even knowing he was being recorded.”

As for the flag, Grandstaff disposed of it properly.

Fort Bragg officials were able to confirm that the man worked for the Army. As for the identity of the soldier, one social media user posted on Facebook informing Grandstaff about him, writing, “[H]e likely lives right by you.”

Grandstaff, who was touched by the kind act, shared a thank you message to the service member, saying, according to WRAL: “Thank you for taking care of my flag, and thank you for your service.”

A storm damaged our flag pole and ripped the rope. The soldier was not aware that our Arlo cameras recorded his random act of kindness.Credit: Frankie Grandstaff via ViralHog