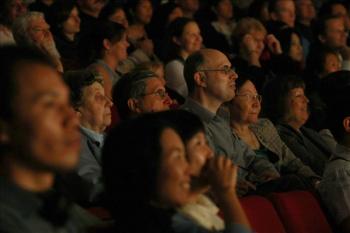 Reid MacWilliam, a professor at Mohawk College of Applied Arts and Technology’s School of Business, said he easily understood the meaning of the various acts thanks to the state-of-the art backdrops and the bilingual hosts.

The Spectacular uses various art forms, including Chinese classical dance, to portray the essence of China’s traditional culture — a culture that emphasized virtues and principles.

Mr. MacWilliam, who attended Saturday’s show, said the theme of the various dances highlighted concern for community and others’ well being, values that foster global peace.

“That [theme] had an incredible beauty to it,” he said. “Certainly movements like Falun Gong are to be praised for setting that kind of example and moving us in that kind of direction.”

With its guiding principles of Truthfulness, Compassion and Forbearance, Falun Gong is a spiritual discipline rooted in Chinese culture that is currently being brutally suppressed by the Chinese regime. Some of the acts in the Spectacular depict abuses against practitioners of Falun Gong in China.

After years of communist rule in China, many of the traditional arts have been lost or used to promote communist ideology. The New York-based Divine Performing Arts, the company that presents the Spectacular, is reviving the best of the ancient and traditional dances and music.

“To me it [represented] the emergence of a new global possibility, and one of the routes to that is the teaching of Falun gong, which is the re-emergence of ancient Chinese beliefs and the cultural foundation that the government of China has basically destroyed and that the groundswell of Chinese opinion is trying to overcome now,” said Mr. MacWilliam.


The Mid-Autumn Festival is one of China’s most ancient and cherished holidays. The Spectacular expresses Chinese classical dance and showcases authentic traditional Chinese culture. Through background scenery, costumes, and choreography, the Spectacular expresses truthfulness, compassion, and pure beauty. China’s history comes to life in this gorgeous performance that is entertaining, inspiring, and uplifting. The show’s content is presented in both Chinese and English. For more information, visit DivineShows.com/Toronto .