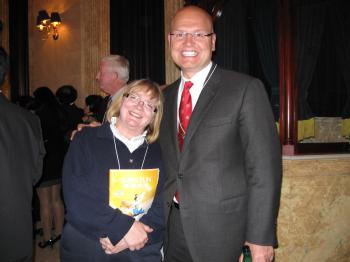 Toronto Mayoral Candidate: ‘It was a feast for the eyes’

Rocco Rossi, one of the front runners of the mayoral race for the city of Toronto, attended the show with his wife. Mr. Rossi had high praise for Shen Yun.

“It was a feast for the eyes,” said Mr. Rossi, who is also former CEO of the Heart and Stroke Foundation of Ontario and a former national director of the Liberal Party of Canada.

“It was a beautiful and inspiring show full of colour and tragedy, humour and extraordinary performances—the orchestra, the dancers, the singers,” he said.

The Shen Yun soloists impressed him as well. “I thought the singing was first rate, in particular the first tenor,” he said, referring to tenor Tian Ge. “The purity of the voice and the hitting of the notes were really, really wonderful to listen to.”

The Shen Yun orchestra is unique in the way it blends classical western and Chinese instruments.

Mr. Rossi said he also appreciated the values conveyed by Shen Yun. “[There were] also very important messages about the power of divine inspiration, the power of staying true to your values. [These are] very important values for all of us to treasure,” he said.

“The dancing tells the story,” said Mr. Rossi, adding that he and Mrs. Rossi were touched by a story-based dance titled Nothing Can Block the Divine Path which dramatizes the Chinese regime’s persecution of followers of the spiritual discipline of Falun Gong.

In the dance, a mother and daughter are brutalized by police when they were found performing the meditative exercises of Falun Gong in a park.

“As my wife said, we were both very, very moved by the rendition of the story of the mother and the daughter facing discrimination and violence, just for performing a very simple act that didn’t hurt anyone.”

Shen Yun Performing Arts will perform three more shows at Canon Theatre in Toronto: this Saturday at 2:00 p.m. and 7:30 p.m., and this Sunday at 2:00 p.m. For more information, please visit www.shenyunperformingarts.org.