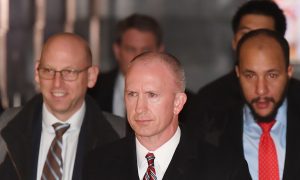 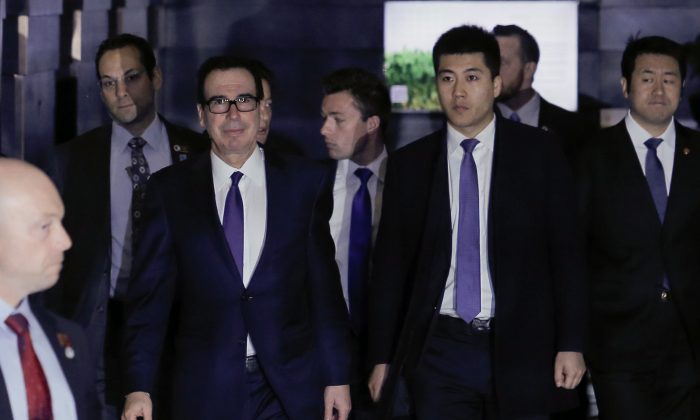 U.S. Treasury Secretary Steven Mnuchin, a member of the U.S. trade delegation to China, leaves a hotel in Beijing for talks with Chinese officials on Feb. 14, 2019. (Thomas Peter/Reuters)
US-China Relations

Top US Trade Envoys to Meet China’s Xi, No Decision on Deadline Extension

WASHINGTON/BEIJING— The Trump administration’s top two negotiators in trade talks with China will meet on Feb. 15 with Chinese leader Xi Jinping, but there has been no decision to extend a March 1 U.S. deadline for a deal, White House economic adviser Larry Kudlow said on Feb. 14.

“The vibe in Beijing is good,” Kudlow told Fox News Channel in an upbeat assessment of the U.S.-China talks that are set to conclude on Friday in Beijing.

U.S. tariffs on $200 billion worth of imports from China are scheduled to rise to 25 percent from 10 percent if the two sides cannot reach a deal by March 1, increasing pressure and costs in sectors from consumer electronics to agriculture.

Although President Donald Trump said earlier this week that an extension of the deadline was possible if a “real deal” was close, Kudlow, director of the National Economic Council, said the White House had made no decision on that.

“I can’t speak to that. No such decision has been made so far,” Kudlow said when asked if there would be a 60-day extension.

The talks, scheduled to run through Friday, follow three days of deputy-level meetings to work out technical details, including a mechanism for enforcing any trade agreement.

China proposed in the talks this week to increase purchases of U.S. semiconductors to $200 billion over six years as part of a deal to ease American tariffs, a person briefed on the talks told Reuters. But the semiconductor proposal, first reported by the Wall Street Journal, was part of a “recycled” package of goods purchase offers that Beijing first presented in the spring of 2018, the source said.

The person also said little progress had been made so far this week on the most difficult issues involving U.S. demands that China make sweeping changes to curb forced technology transfers and industrial subsidies and to enforce intellectual property rights.

Trump told reporters on Wednesday that the negotiations had been progressing “very well.”

A Bloomberg report cited sources as saying Trump was considering pushing back the deadline by 60 days to give negotiators more time after the Chinese side requested a 90-day extension.

A source familiar with the talks told Reuters on Wednesday before the high-level talks began that the Chinese had not raised the idea of a 90-day extension.

Hu Xijin, the editor-in-chief of China’s nationalist Global Times tabloid, also tweeted that speculation on an extension was “inaccurate,” citing a source close to talks.

Trump has said he did not expect to meet with Xi before March 1, but White House spokeswoman Sarah Sanders has raised the possibility of a meeting between the leaders at the president’s retreat at Mar-a-Lago in Florida.

Chinese Foreign Ministry spokeswoman Hua Chunying said she noted Trump had said many times he wished to meet with Xi, and that China was willing to maintain “close contact” with the U.S. side, but said she had no information to share on any visit by the Chinese leader.

“Tested by the Trade War”

The Chinese regime has offered few details about the state of negotiations this week.

China’s January trade data released on Thursday showed imports from the United States fell 41.2 percent from a year earlier to $9.24 billion, the lowest amount in dollar terms since February 2016.

Exports to the United States also declined 2.4 percent to $36.54 billion, the lowest amount since last April.

China’s trade surplus with the United States narrowed to $27.3 billion in January, from $29.87 billion in December.

China’s soybean imports fell 13 percent in January from a year earlier, customs data showed, as a hefty duty on shipments from the United States, its second largest supplier, curbed purchases.

While Chinese officials have repeatedly pledged to improve market access for foreign investors, few experts expect Beijing to agree to anything that would force fundamental changes to what Washington complains is its state-led approach to trade.