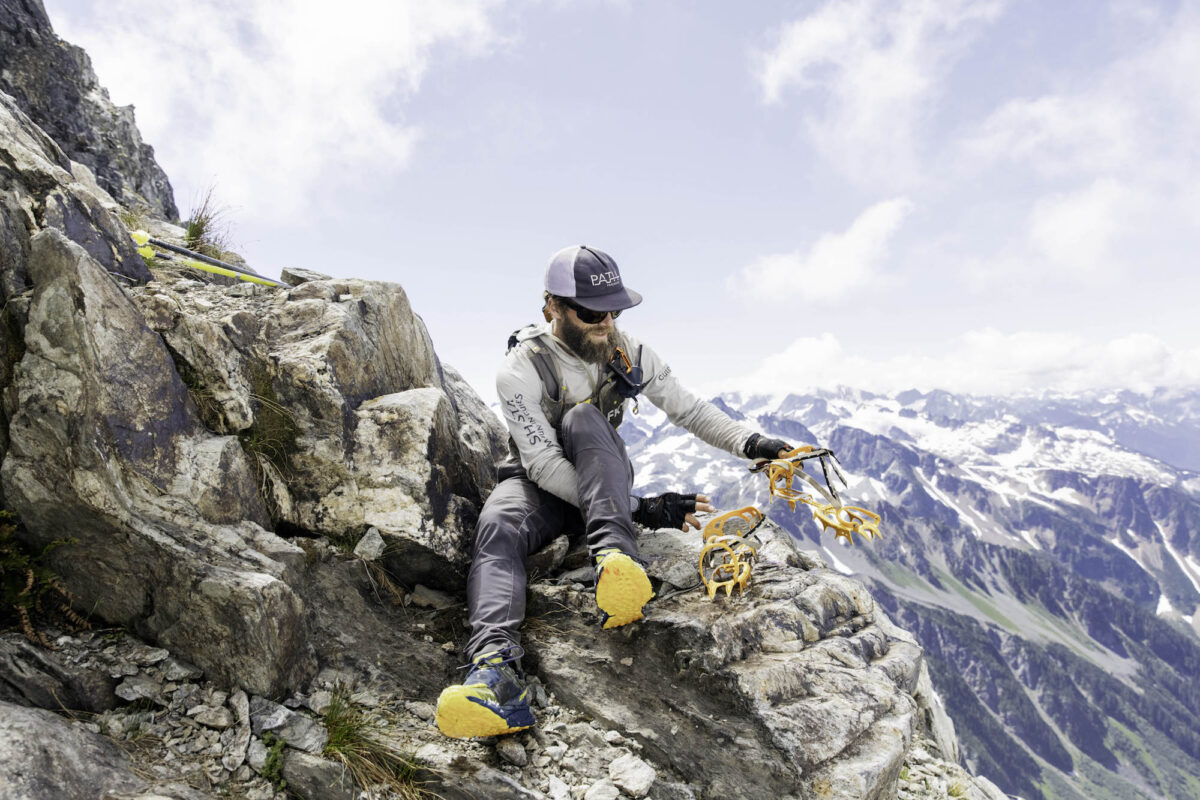 Mountaineer Jason Hardrath on his way up one of 100 mountains in Washington state. (Courtesy of OutsidePR)
People

It’s called a fastest known time, or an FKT for short. It’s a formal and public way to keep track of who’s gone the fastest on a trail, up a mountain, or through a canyon.

The official timekeepers are the regional editors at FastestKnownTime.com, who regularly update the website to show who’s doing what and how fast.

With modern technology, just about every runner has a GPS strapped to his wrist. That, in tandem with a satellite, can keep track of an athlete in real time. Plus cellphones can take geo-stamped photos, to prove it’s indeed the athlete completing the task.

Jason Hardrath is a celebrity within the FKT world. During the school year, he’s a health and physical education teacher at an elementary school in Bonanza, Oregon, but during the summers, he’s an FKT maniac.

“I did 99 prior FKTs. And then for my 100th FKT, out of a bit of poetic justice, I did 100 mountains—the 100 tallest mountains of the state of Washington—as a single FKT, for number 100,” Hardrath told The Epoch Times.

In and of itself, setting these records is impressive. But what makes it even more so is the fact that the odds of it happening were close to zero.

In 2015, at age 25, Hardrath had a stressful day as a teacher and track coach, which was to be followed by a meeting with the school district’s superintendent, for which he was running late. As a young teacher, he felt the meeting was “a really big deal,” so in an effort to relax on the drive there, he decided to plug in some music.

He got distracted, and as he put it, “caught the shoulder, rolled the vehicle, went out the window.”

“I did not have my seatbelt on. Had forgotten to put it on,” Hardrath said.

The accident resulted in a litany of injuries: a shoulder broken in two places, a collapsed lung, nine broken ribs, several internal contusions, and a completely shredded ACL and LCL (the ligaments that hold your knees together) in his right knee.

He didn’t make the meeting with the superintendent.

While in the hospital, Hardrath told one of his doctors about his love of running and mountain climbing. “His first response, without missing a beat was, ′Oh, you’re probably going to let that part of your life go.′ And then he walked out of the room to see his next patient,” said Hardrath.

“I remember how my spirit really sank in that moment, but then, in the very next moment, it was that spirit of defiance, like, ′You really don’t know me. Just wait and see.′”

It was a long and painful rehabilitation, but eventually Hardrath was ready to take on his biggest challenge for his 100th FKT.

Hardrath is one of 1,500 “ambassadors” from the Athletic Brewing Company, who are essentially spokespeople for the nonalcoholic beer the company makes.

“We caught wind that he was doing this,” Mason Gravely, a marketing executive at the company, told The Epoch Times, “and we thought, ‘We gotta follow him somehow.'”

When Gravely learned of Hardrath’s 100th FKT being the 100 mountaintops, he thought, “We have to get a film crew and make this happen.”

With no prior production experience, they did just that.

In order to document the ascents to each of the 100 summits, there were three variations of video recordings. For 35 climbs, Hardrath was completely alone but was outfitted with a GoPro camera.

For 65 climbs, a second FKT enthusiast, Nathan Longhurst, came along and shot with a GoPro. For four of the peaks, a professional camera crew traveled as far up the mountain as they could go.

Ashly Winchester has been Hardrath’s partner for the past four years and is an FKT enthusiast as well, with 53 to her name. “Sometimes there’s a little bit of competition,” Winchester told The Epoch Times. “But we support each other quite a bit in our pursuits. I celebrate all of his wins.”

Winchester was also Hardrath’s logistical support during the 100 climbs, driving the van between locations and having meals (and everything else) at the ready.

At 33, Hardrath is grateful for the second chance at life he’s been given and hopes he inspires his students to “chase goals” and to persevere. He feels he’s doing what he’s been put here to do.

“There’s something about the top of a mountain that speaks to me,” he said. “It’s a place where I feel like I should be.”