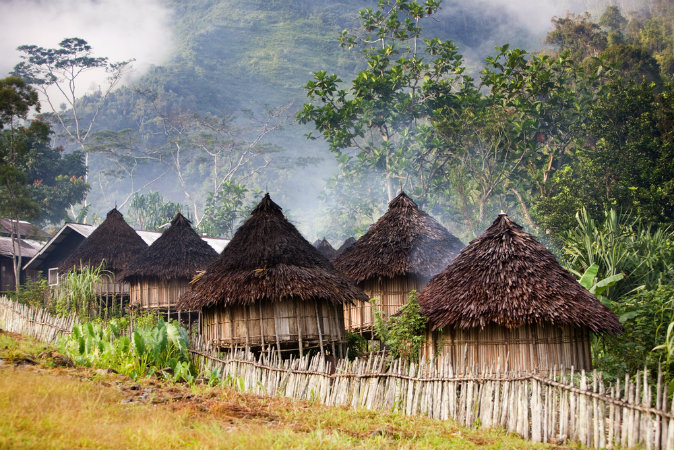 A traditional mountain village in Papua via Shutterstock*
Travel

BY The Traveling Tortuga TIMENovember 17, 2014 PRINT

There are a number of reasons for visiting the top destinations in Papua New Guinea but most of it has a lot to do with everything correlated to the local culture. For the benefit of those who are not aware, Papua New Guinea is considered to be one of the most culturally diverse countries in the world.

Another interesting thing about Papua New Guinea has a lot to do with the country’s history. Its extensive timeline dates back as far as prehistory. The earliest remains found by anthropologists are roughly estimated to have existed as far as 50,000 BC (although this claim is still inconclusive).

Paleontologists agree that the arrival of modern humans in Papua New Guinea occurred during the same era as the migration in Australia. Some indigenous peoples in Papua New Guinea are quite related to Indonesians, Malaysians, Southern Filipinos and other locals in Oceania. It is interesting to note that European influence only arrived in this country during the 19th Century.

Port Moresby Nature Park is one of the most visited attractions in the capital city and it is popular for endorsing the country’s endemic flora and fauna. Other interesting locations also include the National Parliament House and the National Museum and Art Gallery. In case gallivanting around the metropolis piqued one’s hunger, it is always a good idea to replenish one’s energy at Hog’s Breath Café. It is a very famous bistro, despite its unsavory moniker.

Another of the top destinations in Papua New Guinea is Madang. This region is known as the marine frontier where most of the tourist coastal activities often happen. Madang Resort Scuba Diving is an ideal institute serving one’s interest of undertaking maritime exploration.

Tufi Wharf is particularly fascinating for some people due to its capacity to draw unusual sea creatures. Of all the attractions in Madang, perhaps the most popular is the Balek Wildlife Sanctuary. This venue has a decent accommodation conveniences as well as recreational services.

This part of Papua New Guinea is an ideal wilderness destination for ecological tourists with a particular penchant for locales with dense foliage. Lake Kutubu takes avid tourists at the heart of Papua New Guinea’s indigenous wonders. Tourists dwell on elevated bush cottages overlooking the lake while guides take them to the waterfalls via a dugout canoe.

Mount Hagen is a popular highland terminus for travelers because it is here where one can find the highest settlement in the country. Mount Hagen Market remains to be a centerpiece attractionand the main tourist draw. Climbers are very much encouraged to climb the nearby Mount Wilhelm, the highest peak in Papua New Guinea.

This article was originally published on www.thetravelingtortuga.com. Read the original here.

*Image of a traditional mountain village in Papua via Shutterstock