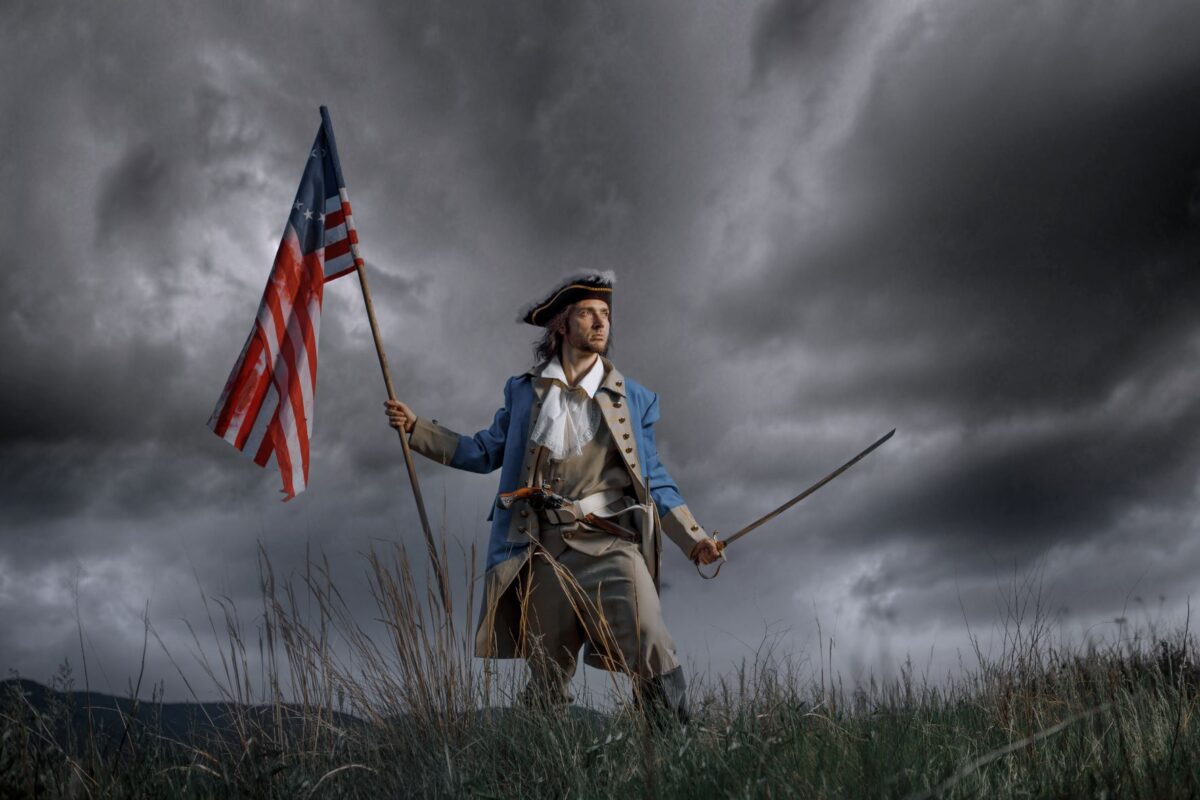 America's War for Independence gave us great stories that have been turned into great movies about our country's founding. (Fotokvadrat/Shutterstock)
Film & TV

Top 5 Revolutionary War Movies: Celebrating the Birth of Our Nation

On this week 239 years ago, the Treaty of Paris was signed by England’s King George III and five of the U.S. Founding Fathers, thus formally ending the eight plus-year Revolutionary War solidifying America’s independence.

In my continuing series of Top 5 war movies, I’ve come up with five impressive titles and one honorable mention TV miniseries that are well worth your investment of time.

Fresh off of his Academy Award nomination for “Saving Private Ryan,” screenwriter Robert Rodat employs many of the same visceral elements, thus leading to the film’s hard “R” rating. In a role turned down by Harrison Ford, Mel Gibson stars as Benjamin Martin, a French and Indian War veteran turned pacifist farmer who is pulled into the fray after the murder of a relative at the hands of the British Army.

The all-star cast includes Joely Richardson as Martin’s love interest and the late Heath Ledger as his eldest child Gabriel.

One of the more overlooked titles from what many consider to be the greatest year in film history (1939), “Drums Along the Mohawk” (based on the novel of the same name by Walter D. Edmonds), sports quite an impressive pedigree.

Produced by industry pioneer Darryl F. Zanuck and directed the legendary John Ford, it stars Henry Fonda and Claudette Colbert as the recently married Gil and Lana Martin. They settle on his farm in the Deerpark region of the Mohawk Valley in central New York with the hopes of living a quiet life away from it all. Needless to say, things don’t go as planned.

Unlike most films of this ilk, the enemy is not the British Army, but rather Tories (Americans loyal to the Monarchy) and indigenous Senecas. The crack supporting cast includes Ward Bond, John Carradine, and Edna May Oliver.

The winner of a 2000 Peabody Award, “The Crossing” depicts one of the most iconic events in the first year of the war and one of its most frequently overlooked. Directed by Robert Harmon (“Ike: Countdown to D-Day”) and adapted by Howard Fast from his own book, it stars the versatile Jeff Daniels as George Washington, then Commander-in-Chief of the Continental Army.

This title refers to Washington’s crossing of the Delaware River on Christmas Day 1776 (captured in the iconic painting by Emanuele Leutze) and his surprise attack on the Hessians, Germans fighting on behalf of the British in Trenton, New Jersey.

Some detractors have derided the film, stating not everything contained in it is verbatim to historical fact, and they are correct, but the employment of minimal “artistic license” is negligible.

One of the first productions shot on “Eastmancolor” stock and presented in the new widescreen (2.55:1) “CinemaScope” anamorphic format, “The Scarlet Coat” is a visual feast. A movie any set and costume designer would kill for, it is known as much for its appearance as its content.

Written by Karl Tunberg (“Ben-Hur”) and directed by John Sturgis (“The Magnificent Seven,” “Gunfight at the O.K. Corral”), it stars Michael Wilding as Maj. John Andre, who worked in tandem with Maj. Gen. Benedict Arnold (Robert Douglas) in their attempt to turn over control of West Point to the British Army.

Anne Francis appears as yet another spy who unsuccessfully tries to distract an American Dragoon agent (Cornell Wilde) with her feminine wiles before he puts all of the pieces together and uncovers the most infamous act of thwarted espionage in the entire war.

Also based on a book by Howard Fast, director Delbert Mann’s 1988 made-for-TV-movie is easily the least known on this list, which is a shame as it is one of the very few productions which concentrates solely on the April 19, 1775 battles of Lexington and Concord.

The first exchange of hostile fire of the war occurred on that day and is seen through the eyes of the fictional Cooper family, particularly eldest son Adam (Chad Lowe). Adam is on the receiving end of tough love from his father Moses (Tommy Lee Jones), a pacifist who questions the Laws of Man and their connection to religion.

The escalating friction between parent and child are put on the backburner with the arrival of British troops and need for the townspeople, most of them with no military training, to quickly assemble a militia.

Based on the Pulitzer Prize-winning book of the same name by esteemed historian David McCullough, the seven-part “John Adams” is the most honored and awarded miniseries ever produced.

The perfectly cast Paul Giamatti plays the title character, the highly intelligent but also irascible and bristling Founding Father who, unlike his chief rivals Thomas Jefferson (Stephen Dillane) and Benjamin Franklin (Tom Wilkinson), wasn’t much of a “people person.”

Oscar-winning director Tom Hooper (“The King’s Speech”) takes full advantage of the 501-minute running time by chronicling the relationship between Adams and his wife Abigail (Laura Linney), the events of the Boston Massacre which set the Revolution in motion, the war itself, and his rich post-presidency life.

This series should be required for everyone who might not know what sacrifices were made so that we all could enjoy our rights and freedoms, many of which we now take for granted.

For viewing options on the above titles, visit JustWatch.com