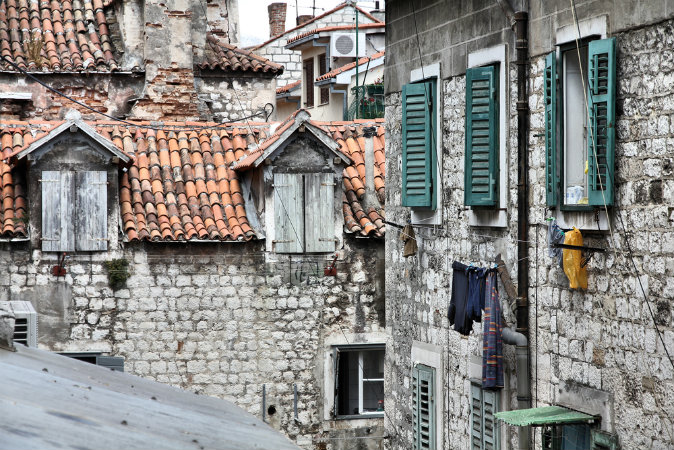 Top 5: My Favourite Things to Do in Split

When I first started planning to travel to Croatia, Dubrovnik was on top of my list but I also wanted to see another city. During my research I came across Split and thought that this would be a great starting point to explore Croatia with easy access to Dubrovnik. I first planned in 2 nights for Split, but I’m glad that I booked an extra night, because this place has a lot to offer. Find out my top 5 favourite things to do in Split below.

The old town of Split is located by the harbour and is a great point to start exploring the city. We spend a whole day walking the narrow cobbled streets and discovered beautiful architecture in hidden alleyways. The most popular part of the old town is probably the  Diocletian Palace which was built in the 4th century AD. The central square of the palace is called Perystile from where you get a beautiful view towards the palace. In the evening you can enjoy listening to music and watch people dance. If you like to get great views over the city and the sea, you should also visit Split Cathedral. But be aware, if you’re scared of heights (like me), skip going to the top of the tower because the steel stairs are very old and narrow.

2. Climb up to the Marjan Viewpoint

Marjan Forest Park covers the western part of Split and is the green oasis of the city. We accessed the park from the harbour and slowly but surely made our way up  to the first viewing point where there’s also a cafe with an amazing view over the harbour. If you keep on walking to the top of the mountain you’ll first pass St. Nicolas Church, followed by a Botanic Garden and a small Zoo. When you reach the summit, you won’t be disappointed – you’ll get the best view over Split.

We turned around at St. Nicolas church because we wanted to do a bicycle tour through Marjan Park. If you like to walk to the top of the hill, I would recommend 3-4 hours to fully enjoy it.

On our second day we rented bicycles to cycle through the Marjan Forest Park – the western part of Split. The first bit was along the harbour which led us to a park. We had a quick stroll around and found a great spot that offered us a beautiful view over the harbour.

We cycled along the main road for another 15 minutes, but then it luckily got closed off for cars. In the western point of the park we saw the Jere Church which was constructed into the rock face in the 16th century – it looks unreal from a distance.

On the north side of the park it mainly goes downhill and it got busier the closer we got to Split. Bene is a nice spot to get off the bike to have a stroll around, get something to eat and sit down by the beach (or even have a swim). We saw a lot of local families there, so they must surely enjoy spending their weekend in Bene.

We left the park through the northern gate and got a bit lost on our way back to the Old town. But generally, if you keep left you’ll get there eventually (or you just take a map with you).

We really enjoyed the cycling tour especially when we got to the closed off streets in the park. It’s very scenic and a great way to get away from the crowds.

There is a lot to chose from and it all depends on what you’re looking for and what your budget is. Because we only had 3 days in Split, we booked the Blue Cave and Hvar Island day tour to make the most of our time in Croatia. We unfortunately were unlucky with the weather and weren’t able to enter the Blue Cave but visiting Hvar Island, Komiza and the Green Cave was well worth it. If you do the Blue Cave tour keep in mind that you spend 2 hours on the boat before your first stop.

5. Spend a Day Out of Split

Again, you’ll have lots of options. You could either book a guided bus tour to the Plitvice lakes and Krka Waterfalls or hop on to a local bus and visit Trogir – an Unesco protected town. Alternatively, you could also visit the Klis – a medieval fortress – that is only 11 kilometers from Split. It’s your choice!

Why Should You Visit Split?

Split is full of history and as long as you stay in the old town you won’t come across any cars which I found very relaxing. It’s also very budget-friendly – I was surprised how cheap the food and drinks were. And last but not least it’s a great place to explore surrounding areas and islands.

This article was originally published on Secret Traveller by Sina Meyer. Read the original here.

*Image of an Old Town in Split, Dalmatia via Shutterstock*