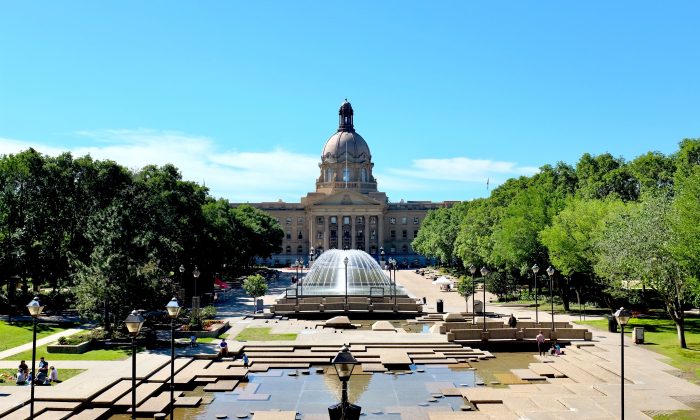 Here are some fun facts about the capital of Alberta, Canada, you may not know: Edmonton sits close to the geographic centre of the province; Hudson’s Bay Company set up a major trading post in the region in 1795 called Fort Edmonton; on summer solstice, the city is bathed in over 17 hours of sunlight.

If long summer days and a rich fur-trading history aren’t enticing enough, we’ve put together a concise guide to our favorite places to see and stay.

No list would be complete without including the out-of-this-world retail, hospitality, and entertainment complex, the West Edmonton Mall. Built in 1981, it is the biggest of its kind in North America—and until 2004, the world. Visited by 30.8 million people annually, the mall has more than 800 stores and 100 dining venues as well as nine large-scale attractions found under the roof of the 5.3 million square-foot facility.

Although it’s difficult to pick just a few, our top standout attractions are the following: Galaxyland Amusement Park with its 27 rides, four of which are rollercoasters, and a nifty Galaxy Quest that is essentially an interactive and immersive 3-D arcade shooter; Professor Wem’s Adventure Golf, an 18-hole miniature golf course right in the heart of the shopping center; and the Santa Maria, an exact replica of Christopher Columbus’s ship used to sail the Americas in 1492.

This glass-enclosed, hillside people-mover opened in December 2017. Traveling up and down at an angle via cable, the funicular helps downtown guests, up to 20 at a time, access a promenade below in 48 seconds, and vice versa. Running alongside the funicular is a wide staircase accommodating anyone who wants a workout or those wishing to sit and enjoy the view, and it also includes a bike rail for cyclists.

From the promenade, a pedestrian bridge leads to more stairs and then an elevator that descends to the Frederick G. Todd lookout point. This is a perfect spot to watch the North Saskatchewan River flow past or admire the Edmonton skyline. Additionally, from this point, the trail system of the River Valley’s parks—22 times the size of New York’s Central Park—is merely steps away.

Affectionately referred to as “the Ledge,” the Alberta Legislature Building is a visual marvel featuring Beaux-Arts architecture—think marble pillars, carved oak wood, and beautifully curated grounds. Take one of the hourly guided tours to learn about Canada’s political process and hear the stories behind the portraits hanging in the halls. Or in the warmer months, take the kids and splash around in the outdoor wading pool.

In the visitor center, on the main floor of the Federal Building, is the 80-seat Pehonan (Cree for “gathering place”) Theatre housing a state-of-the-art 360-degree screen regularly showing the free 4-D film “Our People Our Province” in both English and French. The 11-minute film takes viewers on an adventure led by Princess Louise Caroline Alberta, fourth daughter of Queen Victoria and after whom the province is named.

Not quite within city limits, the famous Royal Tyrrell Museum (RTM) is located in the town of Drumheller, a three-hour drive south of Edmonton. If you’re in Edmonton, however, the road trip is definitely worthwhile. Situated in the rugged Canadian Badlands, a unique geological wonder where some of the world’s biggest dinosaur-fossil discoveries have been made, RTM is the country’s only museum devoted to the science of palaeontology.

Among the many must-see highlights are the Dinosaur Hall, home to the instantly recognizable Triceratops, Stegosaurus, and Tyrannosaurus Rex skeletons; the Preparation Lab, a workspace for palaeontologists to remove rock from fossils they’ve prospected out in the field; and the new Grounds for Discovery exhibit focusing on specimens found through a partnership with various industries such as housing and road construction, oil and gas, mining, and wind turbine development.

One of the most distinctive buildings in downtown Edmonton is the colorful 24-story Chateau Lacombe, a circular structure originally born in 1967 as the Canadian Pacific Hotel. The hotel celebrated its 50th anniversary last year and has undergone extensive renovations. Some of the upgrades include upper level Concierge Floor guestrooms that offer spectacular views of the river valley and exclusive access to the Concierge Lounge, serving daily continental breakfast in the morning, and complimentary beer, wine, and canapés during evening happy hour.

Benjamin Yong is a freelance writer from Vancouver. Twitter @b_yong