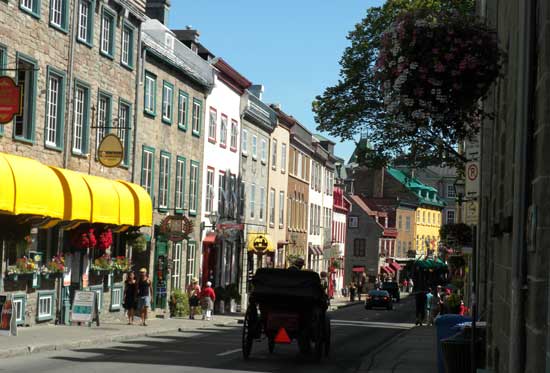 Top 10 Things to Do in Québec City, Quebec

Québec City is unique among North American cities. Founded by French settlers in 1608, the city has clung tenaciously to its cherished roots. With its cobblestone streets, 17th- and 18th-century architecture and outdoor cafes, Old Québec has a European-style charm that is all its own.

French is the language in Québec , a province located in east-central Canada, and it is spoken with an accent and vocabulary that is distinctly Québécoise. Even if you don’t speak French, though, Québec is a must-see destination. This is Canada, after all, and the locals are warm and welcoming to non-French speaking visitors. Many are bilingual, switching easily between French and English, sometimes even in the same sentence.

Travel in Québec often includes a stop in Québec City, the capitol of the province. It is one of the most popular destinations in the region, and draws visitors from around the world. Here are our picks for the top 10 things to do in Québec City.

One of the most popular summer attractions in Québec City is the changing of the guard at La Citadelle de Québec. The Citadel is home to the Royal 22 Regiment, and is the largest British military fortification in North America. During the summer, visitors can watch the 35-minute ceremony that is held at 10 am daily on the parade ground. (Adults are $10 and children under 17 are $5.50). The most popular participant is the regimental mascot, Batisse the goat.

The area’s natural beauty can be seen at Montmorency Falls Park. The waterfall is nearly 83 m high, which is 30 m higher than Niagara Falls. To get the best view, take the gondola up the mountain and walk across the suspended bridge. From there, you can walk down a seamlessly endless collection of stairways. Don’t worry though. The walk down doesn’t take too long, and you’ll be able to feel the spray of the falls at the bottom. In the winter, the spray freezes at the base of the waterfall, forming a “sugar loaf” that becomes a popular attraction.

The Musee de la Civilisation (Museum of Civilization) may have a fairly bland name, but it is certainly not boring. Using the latest media and technology, the museum tells its stories in interactive and fun ways. In Paris on Stage, 1889-1914, visitors are given headsets that play an entertaining soundtrack automatically as they move from room to room. This provides a “you-are-there” experience that adds to the story.

Video game lovers of all ages grin giddily when they visit Game Story, an interactive exhibit dedicated to the story of video games. The exhibit details major developments in gaming. The best part is that visitors get to play video games from each era. Atari, Sega, Xbox…they’re all there to play and learn about. www.mcq.org.

Dining in Québec City is often a trip highlight. Many restaurants and cafes line the cobble streets of Old Québec, so you won’t have to go far to eat. Dining establishments run the gamut from sophisticated upscale restaurants to laid-back affordable dining. There’s an emphasis on locally-sourced dishes, and many locales also offer “prix fixe” menus, which provide appetizer, main dish and dessert for one set price. Local favorites include Savini Resto-Bar, a hip establishment with a fantastic patio location on Grand Allee, the ever popular (and busy!) Café du Monde and Les Voûtes du Cavour, a restaurant located in an 18th century home at Place Royale.