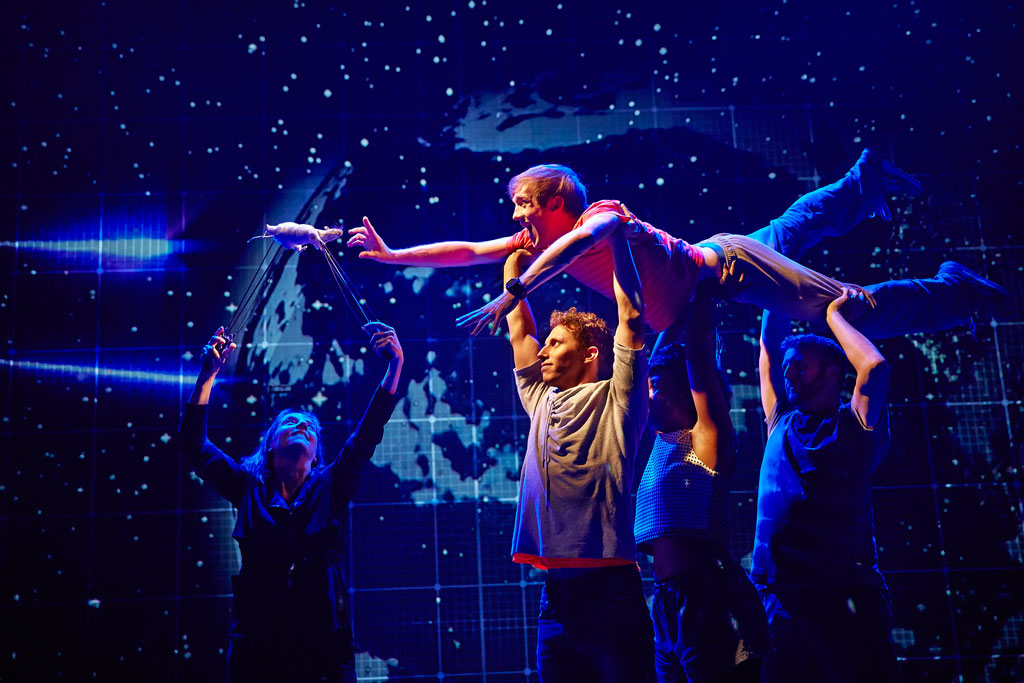 A performance of “The Curious Incident of the Dog in the Night-Time,” in London. The play by Simon Stephens was adapted from Mark Haddon’s best-selling novel and is directed by Tony Award-winner Marianne Elliott. (AP Photo/Boneau/Bryan-Brown, Brinkhoff-Moegenburg)
Arts & Culture

NEW YORK—This year’s best-in-theater list includes a musical with multiple murders, the revival of an America masterpiece, and we celebrate someone who broke an important barrier. The Associated Press’s top 10 list of the best in theater in 2014:

1. “The Curious Incident of the Dog in the Night-Time”: Mark Haddon’s best-selling novel about a 15-year-old boy with Asperger’s syndrome seemed an unlikely skeleton for a show, but director Marianne Elliott and choreographers Scott Graham and Steven Hoggett stage a swirling, beautifully kaleidoscopic, touching show.

2. “The Elephant Man”: One of the world’s hunkiest men went to Broadway and made himself hideous, using only his acting skills. For many young people in the audience, Bradley Cooper’s production may be the first time they come to Broadway. Now they’ll come back.

3. “A Gentleman’s Guide to Love & Murder”: It was “The Little Engine That Could” musical about an impoverished man who discovers he’s ninth in line to inherit a fortune. So he decides to eliminate the eight heirs of the D’Ysquith family standing in his way. Jefferson Mays plays all eight victims—two women and six men—and is the highlight of a clever, raucous show.

4. “Aladdin”: It’s got James Monroe Iglehart as a cartwheeling, high-kicking genie who performs “Friend Like Me” with such skill that he gets a standing ovation. It’s also got a funny, self-mocking script by Chad Beguelin. Both make it a show everyone can enjoy.

5. “A Raisin in the Sun”: The revival helmed by Kenny Leon and starring Denzel Washington and LaTanya Richardson Jackson was a throbbing, vibrant production of the American masterpiece. President Obama even made the trip north to see it.

6. Norm Lewis becoming the first black actor to take on the title role in Broadway’s “The Phantom of the Opera.” It was a long overdue step and Lewis was classy as always, “I love the show but also to have hopefully set a precedent to see more diversity in casting,” he said.

7. “On the Town”: The 1944 romance-chasing romp by Leonard Bernstein, Betty Comden and Adolph Green is filling Broadway’s biggest theater with big, crowd-pleasing dance numbers, lavish and clever visuals, and superb performances from a massive cast.

8. Bryan Cranston, starring in “All the Way,” went from being Walter White, the sinister meth lord in the TV series “Breaking Bad,” to playing President Lyndon B. Johnson, an irascible, foul-mouthed old-school politician. Cranston took home the Tony in his Broadway debut.

10. A wonderfully wacky and yet poignant “The Cripple of Inishmaan,” a super cast of rising-star millennials playing Gen-Xers in “This Is Our Youth” and a searing and amazing “Disgraced.”