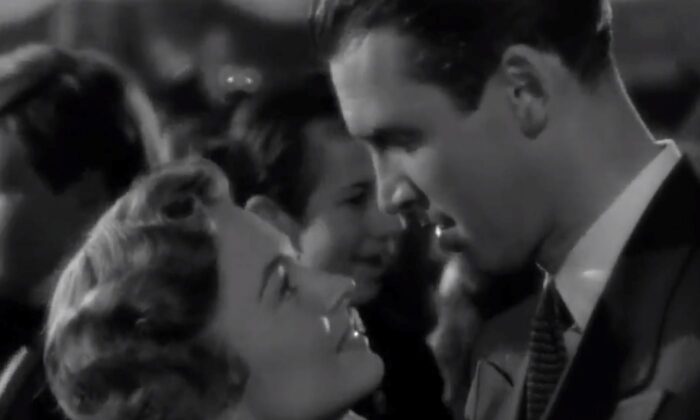 You know it’s going to happen. After a couple of days with those closest to you, you’ll gain multiple pounds while downing animal proteins, dips of all kinds, sweets of every variety, and adult beverages by the gallon, all while trying to keep the promise you made to you and yours to not talk about politics.

Besides good cheer, faith, family, and friends, few things unite us at this time of the year more than an appreciation for, if not outright love of holiday-themed movies.

When assembling this list (which will certainly differ from those of others and maybe yours), I didn’t notice I had practically split it down the center between stuff I saw on (second generation) TV as a tyke and flicks released since becoming an alleged adult. So, in that spirit, here are my choices, not in order of one to 10, but rather by theatrical release date.

Happy Holidays to all!

Receiving mixed critical response and a box office failure upon release, director Frank Capra’s timeless classic fantasy and drama centers on George Bailey (James Stewart), a despondent man whose suicide attempt on Christmas Eve is thwarted by his guardian angel Clarence (Henry Travers). George soon discovers that no one in his home town—including his wife Mary (Donna Reed)—recognizes him and he eventually realizes that he is indeed living a wonderful life.

A 9-year-old Natalie Wood stars as Susan, the daughter of Doris (Maureen O’Hara), a divorcee who works for Macy’s. After she hires Kris (Edmund Gwenn) as the store’s Santa, he—to the guarded amazement of Susan—claims he’s the “real” Santa. A sly comedy far ahead of its time, writer and director George Seaton’s heartwarming tome never panders while speaking to the child in all of us. It is highly recommended to avoid the 1994 remake.

Arguably the finest of the 27 screen adaptations of the Charles Dickens novella stars Alastair Sim as Ebenezer Scrooge, a cantankerous, cold-hearted miser. Rather than glossing over or softening some of the story’s darker elements as other adaptations did before and since, director Brian Desmond Hurst’s version remains the closest to the often gloomy tone of the book.

Based on the 1957 Dr. Seuss book of the same name, this 25-minute animated TV special became an instant audience favorite. Narrated by Boris Karloff (who also voiced the Grinch), it is streamline storytelling at its most efficient and engaging. Although the bloated and overlong live-action (2000) and animated features (2018) both crushed it at the box office, each pales in comparison in terms of quality and longevity.

Writer and director John Hughes steps outside of his usual “teen angst” comfort zone with this knowing, highly relatable comedy. In addition to having to use all three of the titular forms of transportation to get home to Chicago for Thanksgiving, the uptight Neal (Steve Martin) must do so in the close company of the backslapping, but well-intended Del (John Candy). Marking the creative zenith for Hughes and his oil and water leads, the film blends absurdity with pinpoint realism on its way to a heartfelt conclusion without straying into treacle-laden sentimentality.

With this screwball comedy, writer John Hughes and director Jeremiah Chechik did the near-impossible: They made a second sequel that actually works great as a stand-alone production. Chevy Chase returns as Clark Griswald, a well-intended buffoon who is determined to put together an “old fashioned family Christmas,” yet goes over the top at every turn.

Yet another winner penned by John Hughes. Director Chris Columbus’s fish-out-of-water comedy is every kid’s fantasy and/or nightmare. After realizing his parents (John Heard and Catherine O’Hara) have “forgotten” to include him on their holiday trip, the 8-year-old Kevin (Macaulay Culkin) starts doing things he could never attempt with mom and dad in the house, including outfoxing two slightly dim, would-be burglars (Joe Pesci and Daniel Stern).

Jodie Foster’s second (and best to date) effort as a director stars Holly Hunter, Cynthia Stevenson, and Robert Downey, Jr. as siblings who have nothing in common besides blood. When they arrive at their parent’s (Anne Bancroft and Charles Durning) home in Baltimore for Thanksgiving, they are civil to each for about 10 minutes and then the fireworks ensue. Screenwriter W.D. Richter blends black humor, physical comedy, and heartwarming drama into a seamless, winning whole.