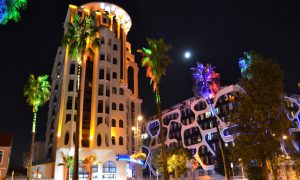 Top 10 Highlights in St. Petersburg, the Captivating City of the Czars

St. Petersburg is a beautiful city filled with extravagant historical palaces, cathedrals and royal gardens. Long recognized as the intellectual and cultural center of Russia, this former capital has been spiffing things up with a growing number of luxury hotels and a vibrant restaurant scene truly befitting this City of the Czars. Below are my top 10 recommendations:

Climb the 330-foot staircase in St. Isaac’s Cathedral, one of the city’s most important landmarks, for a breathtaking panoramic view of the city. French architect Auguste de Montferrand, built this impressive cathedral, the third largest in the world, which is topped with a colossal dome made from 100 kilos of gold!

Once a 19th century Russian royal palace (also designed by Auguste de Montferrand), the Four Seasons Hotel Lion Palace is their first Russian property. Be forewarned: you’ll be very sad if you did not make reservations to stay here! The sumptuous, imperial golden yellow and sky blue guest suites leave you feeling like Russian royalty as you snuggle under the down-filled comforter or watch TV while soaking in a deep tub filled with Bulgari bubbles.

Copyright © 2014 by A Luxury Travel Blog. This article was written by Janice Nieder and originally published on aluxurytravelblog.com

*Image of Grand cascade in Pertergof, Saint-Petersburg via Shutterstock

*Image of Katherine’s Palace via Shutterstock