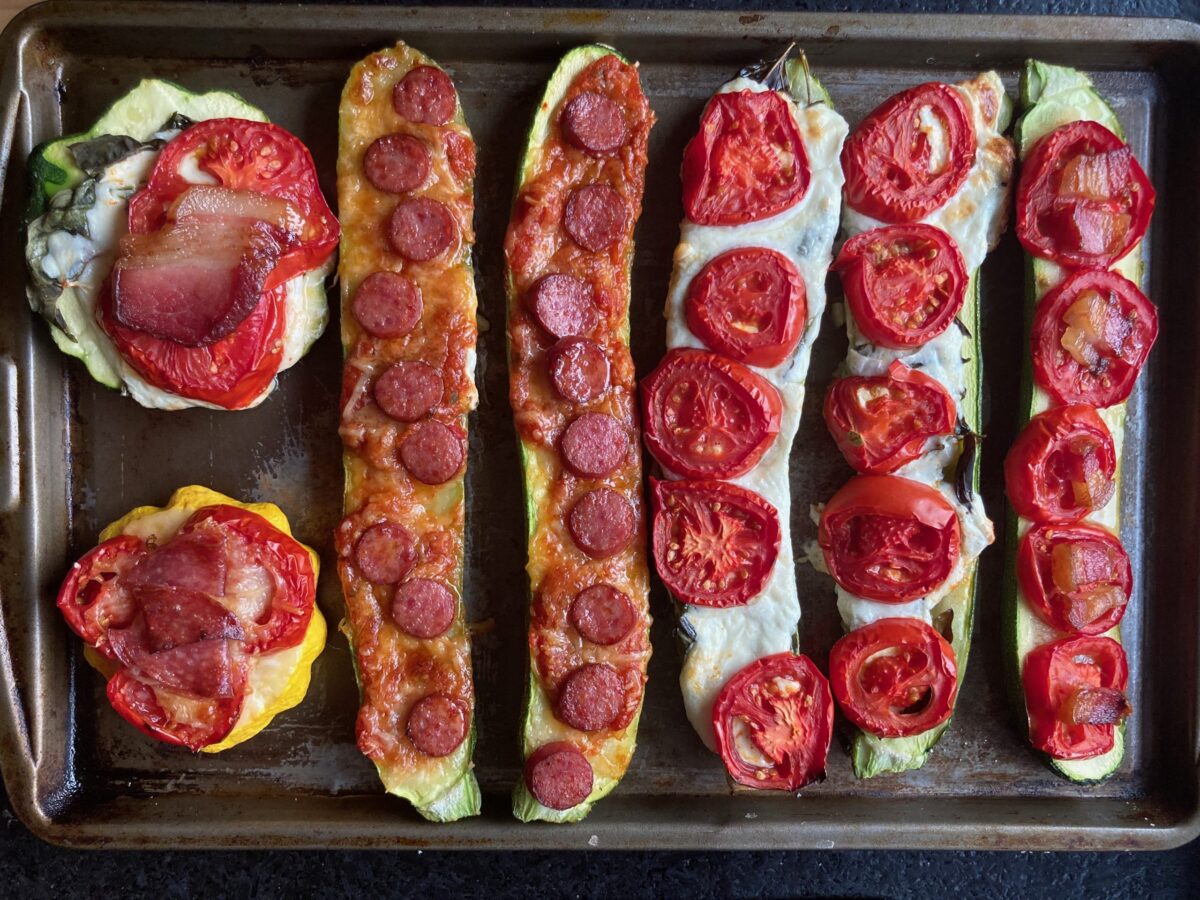 Too Much Zucchini? Turn It Into Pizza

At my local farmers market the other day, I was watching the stand of a farmer friend as he made the rounds. I chatted with shoppers, handled their money as if I were the farmer, and silently took credit for all the amazing produce I didn’t grow.

One of my customers bought a pile of eight-ball summer squash, a type of round zucchini.

“What are you going to do with them?” I asked.

“Slice them up and cover the slices with pizza toppings,” she said, “and bake them into little zucchini pizzas.”

Move over, cauliflower crust pizza, I thought. In my never-ending hunt to find new ways to use zucchini, this was a brilliant addition to the arsenal.

I returned home laden with zucchini, including the normal ones, long and slender like cucumbers, as well as some of my friend’s eight-balls and a few patty pan summer squash, which are shaped like flying saucers.

When I had them back in the lab, I got to experimenting.

I tried several toppings, including a traditional style pizza with red sauce, cheese, and sliced hot dogs, hoping to lure the children on board. I made some with fresh tomatoes rather than red sauce. I made some “white” pizzas without any tomatoes at all, which makes zero sense this time of year, but I gave it a shot in the spirit of research.

The best combinations were the aforementioned traditional style with red sauce and cheese, as well as a BLT-inspired pizza—also known as “BLTizza”—with bacon and tomatoes, which I served with a mixture of fresh onions and mayo. But everyone’s favorite was the caprese salad style with tomato, mozzarella, and basil, which I called “caprizza.”

Before I get into the recipes, here are some general tips on preparing zucchini pizza.

It’s mandatory that you salt the zucchini after slicing it. This step, called disgorgement, is worth doing on all watery vegetables such as eggplant and sometimes cucumber, depending on the context, as well as zucchini and other forms of summer squash. The salt draws water out of the plant cells and prevents the dish from becoming a soggy, watery mess.

To disgorge zucchini, slice it and sprinkle the cut sides with salt. Let sit for 20 to 30 minutes, and then pat the slices dry.

If you’re using round, eight-ball style zucchini, you’ll be able to salt both sides of each slice. If you’re using “normal” long, tube-shaped zucchini, slice them end to end into boats, and cut a flat spot on the opposite side of each slice so it can sit flat and not roll over. These slices will then also have two cut sides to salt. If using patty pan squash, slice them through their equators and cut off the blossom and stem ends to create flat spots to similarly keep them from rolling, and these, too, will have two cut ends to salt.

Here are the recipes. As zucchini come in so many shapes and sizes, it’s impossible to give exact quantities. Use your best judgment. If it looks like pizza as you’re making it, you’re on the right track.

With these recipes in hand, you may never suffer from too many zucchini again.

Slice the zucchini as appropriate, with no slice being thicker than 3/4 inch, and sprinkle with salt. Wait 20 to 30 minutes and pat dry.

Arrange the disgorged zucchini on a baking tray. Add a tablespoon of olive oil to each piece and spread it around. Add a few tablespoons of sauce, spread it around, and then sprinkle with cheese. Add the toppings until it looks like pizza. Bake at 400 degrees F for 20 minutes.

Slice the zucchini as appropriate, with no slice being thicker than 3/4 inch, and sprinkle with salt. Wait 20 to 30 minutes and pat dry. Mix the onions and mayo and set aside.

Arrange the disgorged zucchini on a baking tray. Add a tablespoon of olive oil to each piece and spread it around. Add the tomato slices and then the bacon slices. Bake at 400 degrees F for 20 minutes. Remove and allow to cool.

When cool, top with the mayo onion mixture, and serve.

Slice the zucchini as appropriate, with no slice being thicker than 3/4 inch, and sprinkle with salt. Wait 20 to 30 minutes and pat dry.

Arrange the disgorged zucchini on a baking tray. Add a tablespoon of olive oil to each piece and spread it around. Add the basil leaves to each piece of zucchini. Cover the leaves with mozzarella slices. Lay tomato slices over the mozzarella.

Bake at 400 degrees F for 20 minutes. Remove and allow to cool. Drizzle with balsamic vinegar, if using it, and serve.