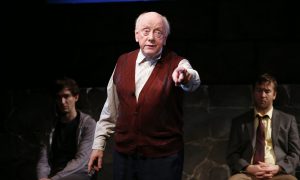 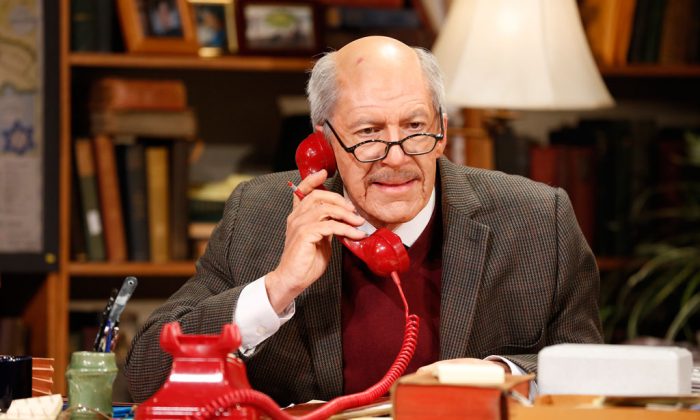 Tom Dugan: The Man Behind the Man Who Hunted Nazis

NEW YORK—Tom Dugan’s favorite review of his work wasn’t in a newspaper or on TV. It was uttered by a teen after a performance of his one-man play “Wiesenthal.”

“He just said, ‘Wow. I thought this was going to suck,'” Dugan recalls with a laugh.

Turning expectations on their heads is something of a specialty for the playwright and author, who is making his New York stage debut this fall with his show about famed Nazi hunter Simon Wiesenthal.

“It’s not a lecture,” he said. “When you go to the theater, it should be special. You could stay home and watch television. It better BE something.”

Wiesenthal was a Holocaust survivor who helped track down numerous war criminals following World War II and then spent the later decades of his life fighting anti-Semitism and prejudice against all people.

Dugan’s 90-minute play is set in 2003 as the aging Wiesenthal welcomes a group of students to his office while also keeping tabs on the hunt for an at-large Nazi. It’s playing at the Acorn Theatre at Theatre Row.

The actor has shaved the top of his head to mimic Wiesenthal’s baldness and dons a 50-pound fat suit to more closely resemble him. He’s nailed the Austrian dialect and the mannerisms of the then-95-year-old.

“I never thought of anyone else playing the role,” Dugan said. “I’m a 53-year-old kid from New Jersey. It’s a real nice assignment for an actor.”

The Wiesenthal who emerges is fond of dirty jokes and not at all holy. “I have no interest in saints. I can’t relate to them,” said Dugan. “There’s no flaws in them. So all the characters I write about are deeply flawed. That’s what makes them interesting.”

The play makes the Holocaust accessible, but also is a way for the Los Angeles-based writer and actor to honor his father, a decorated World War II veteran who helped liberate the Buchenwald concentration camp.

In his other plays, Dugan has explored slavery and mental illness via Frederick Douglass, Robert E. Lee, and Mary Lincoln. All are factually based and carefully researched. “My son says to me, ‘Can you write a comedy?'”

His next one will tackle former first lady Jacqueline Kennedy, but he’ll pass on playing the title role. “Although I think I would be excellent in a pillbox hat, I might have to give it to someone else,” he joked.

Young people are his favorite audience and that’s certainly the case with “Wiesenthal.” Dugan hopes he can teach them to never forget the past and to embrace tolerance.

Once at a talk-back in Beverly Hills, Calif., a girl stood up in surprise. “This really happened?” she asked. Dugan said it did. She replied: “When I was growing up, my parents told me the Holocaust was greatly exaggerated.” The audience was stunned.

Dugan then asked the woman about her family and the question revealed a showstopping nugget: “My great-grandfather was Adolf Eichmann,” she said. The actor spent the rest of the time explaining to the audience that the young woman wasn’t to blame for the sins of her family. And she later thanked him for revealing the truth.

“I earned my money that night,” he said.