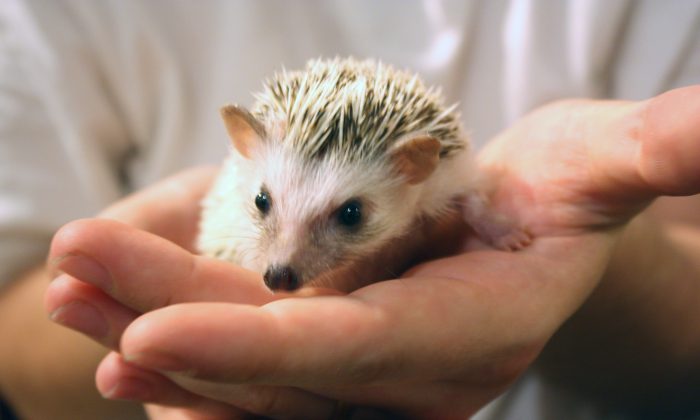 The first dedicated hedgehog café in Japan gives customers the chance to cuddle the prickly animals over a tea or coffee. (Jane Gray/Epoch Times)
Animals

The newest player on Japan’s animal café scene is the prickly hedgehog.

The Harry café (a play on the Japanese word for hedgehog harinezumi) joins the popular but not-as-novel cat, dog, rabbit, and snake cafés that have sprung up around the country.

Located in Roppongi, Harry is the first dedicated hedgehog café in Japan, giving customers the chance to cuddle the prickly animals over a tea or coffee.

Picture a cosy space with a hipster living room feel. Along the walls and in the middle of the room are 20 to 30 hedgehogs in their glass homes; some are out in smaller vintage-looking boxes. In one corner is a place to help yourself to a drink. Staff are around to pick up a hedgehog and place it in your cupped hands.

Owner Yuki Hirano opened the café’s doors in February with the hope that customers will discover that hedgehogs are not as prickly as they look.

“A lot of people have never touched a hedgehog before because they have lots of spikes. I want people to realise they can hold hedgehogs without being spiked,” she said.

The spiny mammals were tame and calm; there was no hint of them suddenly curling up into a ball and giving you a deadly spike. Although the concept may come across as unusual for some, the hedgehogs looked well cared for. Hirano said the animals had regular rest times, which they adjusted depending on the animal’s mood.

Hirano also runs the “Ms. Bunny” rabbit café on the third floor. She said many Japanese customers visit her cafés simply because the animals are cute; others are unsure whether to buy a pet or not, so come to try it out. Her cafés have recently seen an influx of overseas tourists.

“Now around 50 per cent of our customers are from overseas. They come for a unique Japanese experience,” Hirano said.

In the Japanese market, animal cafés fill a niche as many small apartments in urban areas don’t allow pets. At an animal café people can spend time with animals at a small cost compared to keeping a pet at home.

Umi Ishikawa, co-founder of Japan’s first dedicated owl café Fukuro no mise (translates as owl café), used to take her dog for a walk with her owl. Her feathered friend got attention from passers by and made them smile, so she decided to open up her own owl café.

That was four years ago. Ishikawa’s owl café in Tsukishima, Tokyo, is still going strong – even after the owl café boom in Japan, which was sparked by the Japanese Harry Potter craze.

Although the café is small, the birds were docile and had rest time. The space is dimly lit and intimate with owl-themed curtains, like you have just walked into someone’s apartment.

Kanae Iwashita, who works at the café, said, “The owner opened the café to make people smile.”