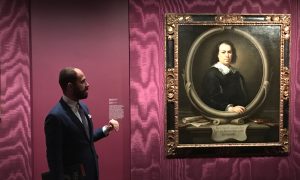 Murillo Reaches Across Time at The Frick
0 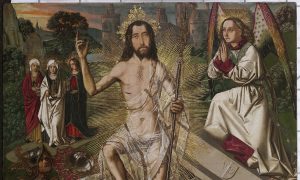 The Brilliance of ‘Bartolomé Bermejo: Master of the Spanish Renaissance’
0 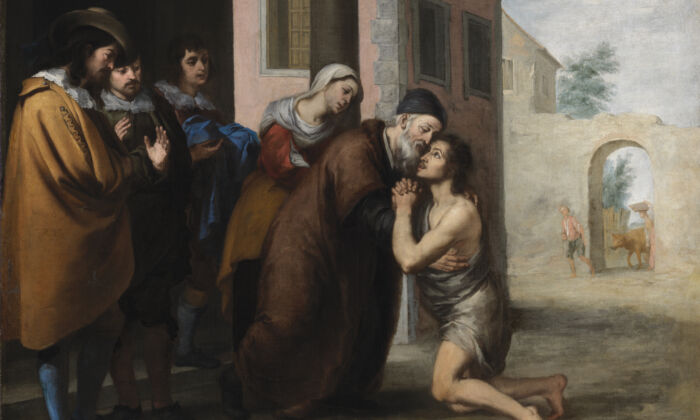 A detail of "The Return of the Prodigal Son," 1660s, by Bartolome Esteban Murillo. Oil on canvas; 41 1/8 inches by 53 inches. Presented by Sir Alfred and Lady Beit, 1987. Beit Collection. (National Gallery of Ireland)
Fine Arts & Craftsmanship

Sin, repentance, and forgiveness all play out in the parable of the Prodigal Son, the most illustrated biblical parable in Western art.

In 17th-century Spain, single biblical scenes, such as the reformed son returning home to his forgiving father, were more commonly seen than a series of narrative paintings telling a story. Not until the 1660s did Spanish art see the Prodigal Son story illustrated in its entirety when celebrated artist Bartolomé Esteban Murillo painted an ambitious series of six narrative paintings.

Those six paintings were restored between 2012 and 2018. And—for the first time in 30 years—the series can now be seen together in the exhibition “Murillo: Prodigal Son Restored” at the National Gallery of Ireland. The exhibition was curated by Aoife Brady, who is the gallery’s curator of Spanish and Italian art, and paintings curator Muirne Lydon, who led the restoration efforts.

Included in the exhibition are insights into Murillo’s process of painting that were revealed during the paintings’ restoration. In addition, European artworks that inspired Murillo’s Prodigal Son series, such as etchings by French artist Jacques Callot and an engraving by German Renaissance master Albrecht Dürer, are also on display.

The exhibition ends on Jan. 10, 2021, after which it will embark on an international tour that begins at the Meadows Museum in Dallas, Texas, the date of which is yet to be confirmed.

The Best Artist in Seville

Seville-born Murillo (1617–1682) lived and worked in Seville for over 40 years until his death. Despite never leaving Spain and seldom leaving Seville, he had access to other European cultures. Murillo’s Seville was a thriving merchant city frequented by foreign tradesmen, many of whom became his patrons.

Interestingly, Murillo’s fame escalated during a time of tragedy, when Seville was hit by a plague and famine. Most of Murillo’s fellow artists, such as the Spanish painter Francisco de Zurbarán, fled Seville to the court of Madrid. Because Murillo’s patrons were mostly foreigners whose lives and livelihoods were largely unaffected by the disease, he kept working in the city, making him the preeminent painter of Seville.

The Prodigal Son parable is a classic story of redemption. One day, the youngest of two brothers approached his father for an advance on his inheritance. Not long after he’d been given his portion of the family fortune, the young man gathered his belongings and left home for a far-off land.

In the new country, he embraced a life of debauchery, spending until he became destitute. Famine soon came to the country, and without any money, the poor young man had to find work to survive. He hired himself out as a swine herder, and it’s there in the field that he began to repent. He even became envious of the pigs’ food because he had nothing. He thought back to his father: Even his father’s servants were fed well. He decided to return home and humbly confess his foolishness.

Once home, the son is greet by his father who runs out to meet him with much joy. The son admitted that he’d sinned against heaven and had not honored his father. And he requested to be treated as one of his father’s servants. But the jubilant father ordered his servants to dress his son in finery and that the fattest calf should be prepared for a feast, all in celebration of his son’s return. His son had been lost but had found his way back home.

When the elder son returned from working in the fields, he became enraged with jealousy when he heard about the celebration. He confronted his father as to why, as a loyal and hardworking son, he had never been rewarded in this way. The father simply tells his son that they have always been together and all that is the father’s is also the son’s.

A Few Firsts for Spanish Art

Murillo’s depiction of the entire Prodigal Son parable was pioneering for Spanish narrative painting. Not only was it the first painting cycle of the story in Spain, but two of the scenes had never before been seen in Spanish art. These are depicted in “The Prodigal Son Feasting” and “The Prodigal Son Driven Out.” This is because local Sevillians “valued the decorous and restrained over the overt and exuberant,” Brady explained in the exhibition catalog. For Spanish sensibilities, those scenes would have been considered unseemly and uncouth.

There’s no evidence of the series ever having been displayed publicly, and the patron of the paintings is unknown, although there are various speculations. Because of the local sensibilities and the licentious nature of the aforementioned two scenes, scholars have speculated that the patron may have been foreign.

Other experts believe the patron must have been connected to Seville as the series is steeped in local references. According to the Irish Arts Review, some experts believe that Sevillian nobleman Don Miguel de Mañara, Murillo’s friend and patron, may have commissioned the series based on his own life. As a young man, Mañara had led a life of debauchery which he later repented, dedicating his life to austerity and constructing a charitable hospital in Seville that Murillo decorated.

Set in 17th-century Seville, Murillo’s paintings give viewers a distinctly Spanish biblical story. For instance, the leather chairs in “The Prodigal Son Receiving his Portion” and the bowls and jugs in the feasting scene show distinctive Spanish metalwork. Even the pigs that Murillo’s prodigal son feeds are native Black Iberian pigs, still bred in Spain for the traditional cured ham: jamón ibérico.

Murillo had no native art of the parable to guide him. According to Brady, he took inspiration from Spanish theater: Lope de Vega’s 1604 play “El Hijo de Pródigo” and José de Valdivielso’s 1622 play of the parable.

And during Murillo’s lifetime, the National Library of Spain acquired a large and important collection of European artwork, especially Northern Renaissance art. The work of two artists in particular influenced Murillo’s Prodigal Son series: an engraving by German master Albrecht Dürer and a set of 10 etchings by French artist Jacques Callot.

“Despite never leaving Spain, he was an international, outward-looking artist, capable of recasting stories from different traditions and art forms into a native context,” Brady said in the exhibition catalog.

Murillo made his own additions and interpretations of the parable. The exhibition catalog gives several examples. For instance, he depicted the prodigal son’s mother and sister in the first two scenes, as the son receives his inheritance, and in the scene of his departure; the mother and sister are not mentioned in the biblical tale.

In “The Prodigal Son Feasting,” the son’s moral decline looks almost tame: “Prevailing values of decorum in 17th-century Spain led Murillo to lend an unusual air of modesty to a scene described as ‘wild’ in the biblical text,” explains the exhibition catalog. Other European paintings of the subject, particularly of the Dutch and Flemish schools, embraced more wild scenes.

Murillo depicted the moment when the prodigal son realizes his fall from grace in the painting “The Prodigal Son Driven Out.” In the painting, the son is being expelled from a brothel; there’s no description of this in the biblical text. The catalog also mentions that the addition of the procuress, the old lady in the background, is exceptional in Western art. “Her presence may refer to the young man’s desengaño—the turning point in the narrative in which the sinner is disillusioned by material and carnal pleasures and awoken to the error of his ways, which immediately precedes repentance,” according to the exhibition catalog.

The last scene in Murillo’s series of paintings, “The Return of the Prodigal Son,” deviates from the biblical story; it doesn’t show the scene of the brother’s resentment.

Murillo’s ‘The Return of the Prodigal Son’ Returns

Murillo’s Prodigal Son series is one of only two narrative cycles he painted, and the only cycle still in its entirety. How this rare Spanish artwork reached Ireland is another remarkable story and a testament to its prestige and beloved appeal throughout time.

Today, we’re fortunate to observe the full series of Murillo’s narrative paintings due to the incredible efforts of the Earl of Dudley. In 1867, the Englishman bought five of Murillo’s Prodigal Son paintings from Spanish politician and businessman José de Salamanca y Mayol. The earl then set his heart on acquiring the sixth and final painting to complete the series: “The Return of the Prodigal Son.”

Having been owned by a succession of illustrious Spanish collectors, Murillo’s “The Return of the Prodigal Son” has a celebrated past. The painting’s last Spanish owner was Queen Isabella II of Spain and her consort, who gifted the painting to Pope Pius IX in 1856.

After a series of negotiations with the Vatican, the earl finally fulfilled his wish: In 1871, he paid a remarkable price to reunite Murillo’s cycle, exchanging two Italian Renaissance paintings—Fra Angelico’s painting “Virgin in Glory With Saints Dominic and Catherine of Alexandria,” and a Bonifazio di Pitati painting of the holy family—and 2,000 gold Napoleons to reunite “The Return of the Prodigal Son” with the other five paintings.

The Beit family cherished the series. Even after they’d gifted the paintings to the National Gallery of Ireland in 1987, along with priceless masterpieces by the likes of Johannes Vermeer and Diego Velázquez, it was only Murillo’s Prodigal Son series that the Beits stipulated be returned to their home, Russborough House, each summer until 2002.

Now, more than 350 years after the series was painted, Murillo’s impactful, visual storytelling of his Prodigal Son cycle of paintings still charms viewers. In these paintings, Murillo demonstrates the power of both the parable and visual storytelling, emphasizing the tale’s universal relevance regardless of creed, time, and place.

To find out more and to see the “Murillo: Prodigal Son Restored” exhibition online, visit NationalGallery.ie