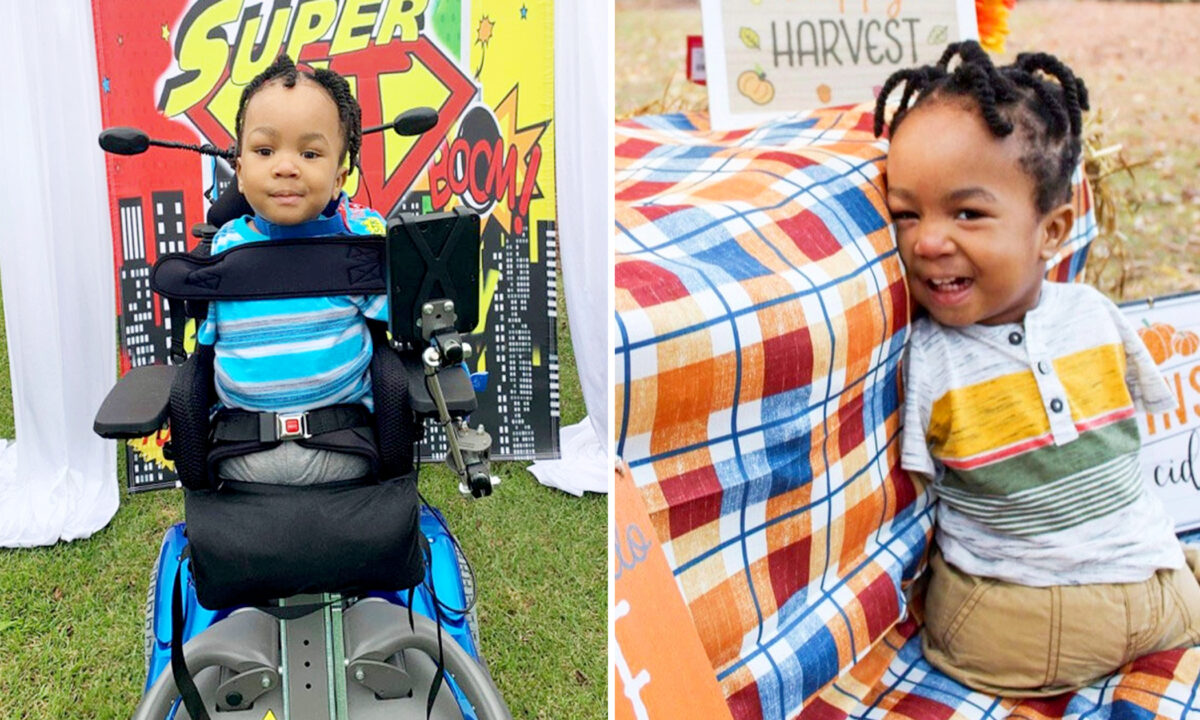 Toddler Who Was Born With No Arms and Legs Survives Against the Odds, Gears Up to Start School

A toddler who survived against the odds after being born with no arms and legs is now gearing up to start school this September.

Jasmine Self, 27, gave birth to little Rondell Wilson Jr. (RJ) despite being told during her pregnancy that he would be severely disabled.

At five months along, an ultrasound scan revealed Jasmine’s little one’s limbs were not developing. Upon hearing the news, RJ’s mother and father, Rondell Wilson, were distraught, but decided not to give up on their baby.

RJ suffers from a medical condition called tetra-amelia syndrome, which is characterized by the absence of all four limbs, as well as severe malformations of the face, heart, nervous system, skeleton, and genitals.

The condition is caused by a genetic mutation in a section of DNA that plays a critical role in development. It affects a handful of families worldwide and most babies who suffer from it die before or shortly after birth.

However, RJ, who was born in September 2018 weighing just 2 pounds 4 ounces (1 kg) and spent the first two months of his life in intensive care, has fought against all the odds and is now thriving at his home in Florence, South Carolina.

“It’s been three years since we made the best decision of our lives,” said Jasmine, who owns a cosmetics business. “He is such a positive little boy and he gives me so much happiness.”

Although his parents were ready for the challenges and knew it wouldn’t be easy to raise and care for him, they were determined to give RJ the best chance at life that they could.

“There is absolutely nothing wrong with him in any aspect other than his physical disability, and I believe he will grow up to be an extremely successful human being,” Jasmine said.

Since RJ came home from the hospital, he has been developing well, into a happy, healthy child.

The 3-year-old gets around the house by rolling on his torso and is becoming more and more self-sufficient each day. Additionally, his mother explained that he is just like a normal toddler, who loves music and watching TV.

RJ will always need help in a lot of areas of his life, but Jasmine is extremely pleased with her son’s progress.

One area of his development that Jasmine is particularly excited about is his vocabulary, with RJ now able to communicate with her on a regular basis.

“He’s growing up really fast, it’s actually quite scary. He always wants to try to do things for himself before he accepts any help from me,” Jasmine said. “Every day, he is communicating more and more, and it fills me with joy hearing him speak.”

Since RJ’s arrival, Jasmine has also given birth to a girl, Jaslynn, now 2, making RJ a big brother—a role that he has excelled in.

“When I had Jaslynn, he was super excited and he’s been the best big brother a girl could ask for,” Jasmine said. “I brought her home from the hospital and he tried so hard to help hold the bottle for her during her early months—it was very sweet.”

However, Jaslynn is now a bit older and is also helping her brother.

“They have a really great relationship—I’m a very proud mom,” Jasmine said.

The pandemic, meanwhile, has been worrying for the family to deal with, as RJ is considered clinically vulnerable, but thankfully they’ve been able to keep him safe.

“We’ve been quite scared about Covid because RJ has no limbs so there is no place for the IVF drip to go if he gets ill and has to be hospitalized,” Jasmine said. “We’ve been shielding, but this hasn’t affected his development as much as I thought it would.”

RJ is turning 4 this year, which means he is facing the prospect of starting school in September.

Jasmine is eager to get him into education as soon as she can so he doesn’t fall behind, but she is apprehensive to put pressure on him if he’s not ready.

A school environment is very different from what it’s like at home, and RJ has a specially made wheelchair, which he will need for kindergarten.

“I think, mentally, he will undoubtedly be ready to start school with the rest of his year group, but it’s his physical disability which may hold him back,” Jasmine said. “We are still getting him toilet trained, which has been difficult, so we’ll need to get things like that sorted before he is ready.”

Jasmine is very confident that RJ will be able to go to school sometime. Whether it will be this year is something that’s yet to be decided.

“It will certainly be a challenge for both him and us as parents, but we’ve tackled everything else that has ever been thrown at us so we’ll tackle this as well,” she said.