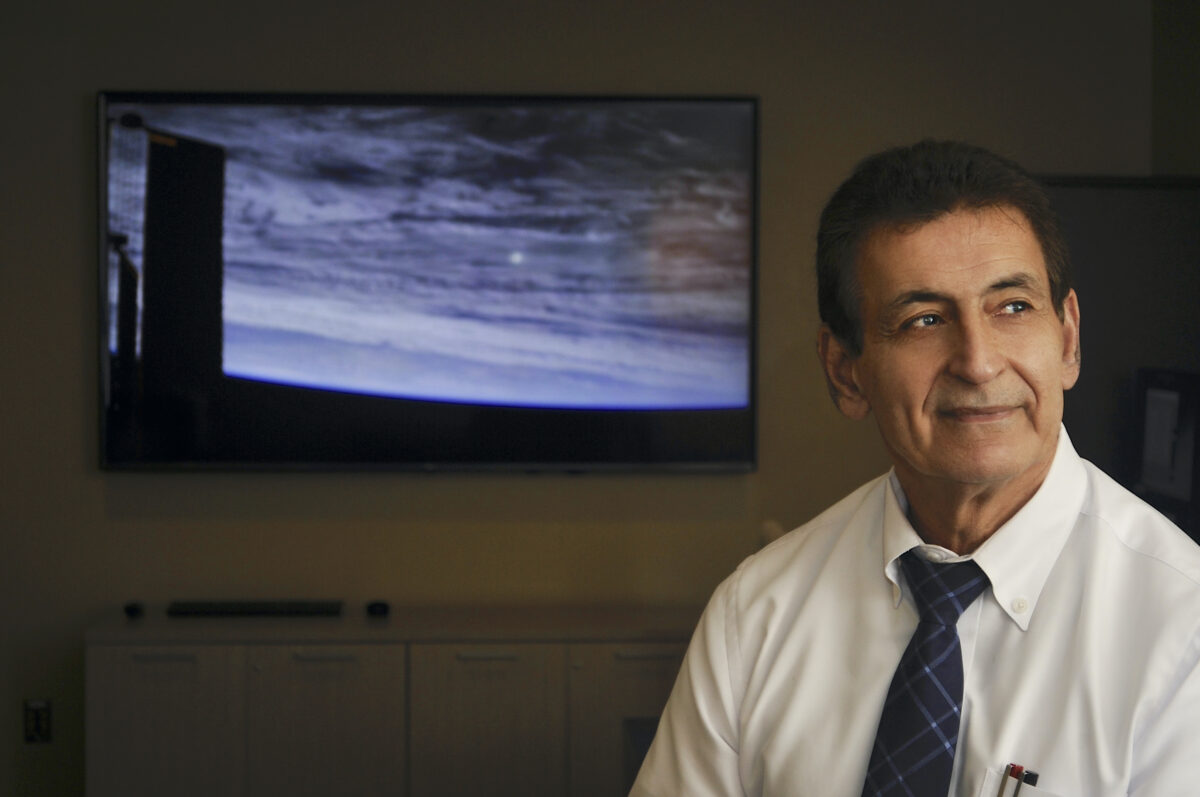 Exploring space is more than rocket science for this engineer
BY Karim Shamsi-Basha TIMEApril 8, 2022 PRINT

Dr. Lee Moradi is a humble man, one of those who would rather not receive attention. He is of medium build, with vigorous intensity hiding behind a thin veil of Persian alacrity. Moradi has worked with NASA since the 1980s—but he is not a rocket scientist. At the University of Alabama at Birmingham, he is the Director of Engineering & Innovative Technology Development (EITD) and a professor at the School of Engineering. Through EITD, he manages multi-million-dollar projects for NASA to design and develop cold stowage hardware to be used on the International Space Station (ISS).

“These cooling units preserve biodegradable scientific samples on the ISS,” Moradi said. He explained that the units have cooling capacities ranging from minus 20 degrees Celsius to minus 190 degrees Celsius. “These temperatures enable astronauts to preserve experiment samples, then bring them back to Earth. Our units are designed with the scientist in mind,” Moradi said.

A number of studies from these samples have led to advancements in health and other sciences. The cold stowage units are appropriately named Merlin, Glacier, Polar, Rapid-Freeze, and Iceberg.

Space, according to Moradi, is an unfriendly place. The impact of microgravity is tremendous, but the EITD team designs and develops hardware to withstand the challenging requirements at the International Space Station, as well as g-loads (the heavy force of quick acceleration/deceleration during rocket flights, expressed in magnitudes of the force of gravity on Earth) and the vibrations of launch and landing vehicles.

“Most of the cooling units run only on 75 watts of power and meet the desired requirements. Our team works hard to advance the research in the microgravity environment of space,” Moradi said.

Systems Engineer Brittney Macon concurs. “A lot of work takes place before the building of these units. Our system engineers gather the NASA requirements, then we work on meeting them from interfaces on the space station to the power connectors on each unit. We monitor everything remotely and check data constantly.”

Macon recalls sending a treat to the astronauts. “One time, we sent the astronauts ice cream. After doing their experiments, they delighted in eating it!”

Moradi’s interest in space began when he was a young boy in his birth country, Iran.

“When I was 12 years old living in Iran, the moon landing happened in the middle of the night. I remember watching it and having this feeling that I, one day, might be involved in space exploration,” Moradi said.

But not all memories are positive. Moradi recalls the space shuttle disasters of Challenger and Columbia. Challenger exploded after liftoff in 1986, killing all seven astronauts. Then, in 2003, the shuttle Columbia disintegrated as it returned to earth, also killing its seven astronauts.

“I saw the Challenger explode, and it was devastating. Then, the Columbia disaster directly impacted us here at EITD. I was at home on Saturday morning making breakfast. The phone rang, and they told me that we lost Columbia during re-entry. We had 15 Japanese scientists here at EITD waiting for the return of their protein crystals,” Moradi said, which were to be used for drug research. “We were all stunned by that tragedy. The Japanese scientists were crying in our conference room.”

Despite the two extreme events, Moradi and his team at UAB continue to provide the best hardware that preserves scientific samples in space. But please, do not refer to him as a rocket scientist. And no, Moradi does not sport a pocket protector!