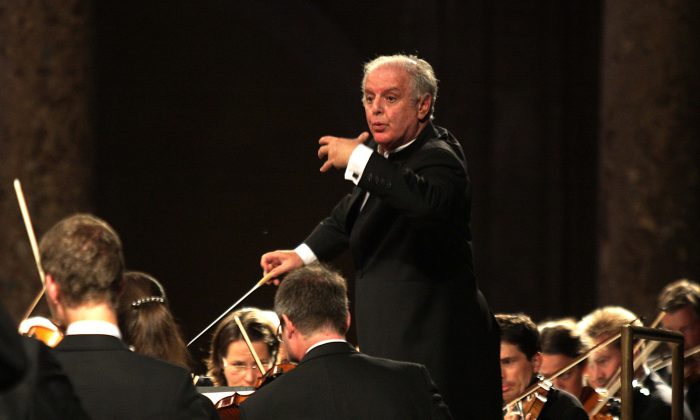 Tinkering With the Ivories: Barenboim Unveils His ‘New’ Piano Design

In his 70s, the pianist and conductor Daniel Barenboim continues to attract attention not only for his performance schedule but also for his views on global issues. He is in London to perform a cycle of Schubert’s piano sonatas in a series of four recitals on a redesigned piano, created especially for him.

It is rare for such an event to attract the high-profile media coverage that has been seen over the last days. The new piano was launched at a press conference prior to the first of his Schubert concerts. Although it bears his name, it was built to his specifications by the instrument maker Chris Maene with support from Steinway.

The piano gives rise to two questions: is the design really new, and is it successful? The answer to the first question is no. The main difference between Barenboim’s design and most conventional modern grand pianos is that the strings run in parallel – in other words they do not cross each other. So-called “straight-strung” pianos were common in the 19th century: they were developed in the 1820s and 30s by makers such as Broadwood in London, Erard in Paris and Hoxa in Vienna. Steinway patented a cross-strung frame in 1859, and it is this which has survived in modern grand pianos. Barenboim’s piano is based on an instrument owned by Franz Liszt, which survives in Siena.

The second question is rather more complex – Barenboim clearly thinks the new instrument is successful. He has stated that it provides a clearer sound and that it has little of the homogeneous blend that characterises most modern pianos: “The pianist has to create the blend and I like that.”

How Does It Sound?

Will the average listener be aware of the difference? Possibly, if they listen to a lot of piano music. The clarity of sound is certainly noticeable, particularly in the lower and middle registers, but many of the audience at the first concert noted that there was a lack of the resonance that we expect from a modern piano. “Tinkly” was a word I noticed being used on Twitter after the concert.

Perception of timbre is complex and is highly susceptible to cultural influence, so it is unlikely that a true consensus will emerge. Barenboim has always rejected the notion of period instruments and, in creating a new piano based on 19th-century ideas, he runs the risk of alienating both the period audience and the champions of the modern piano – not that this concerns him.

Nevertheless, more diversity in the piano world is refreshing. Steinway dominates concert halls and has done so for most of the past 100 years; back in the early 19th century there was more competition between piano manufacturers (and indeed many had their own halls, such as the Bechstein Hall in London and the Salle Pleyel in Paris).

Given Steinway’s commercial dominance and the relatively small market for such instruments, it is unlikely that Barenboim’s piano will ever become a commercial success; it is more likely to be a footnote in the history of piano manufacturing and in his own career. Some will no doubt see it as yet another cynical marketing ploy to differentiate Barenboim from his colleagues (though his profile means he has little need for additional exposure) or as a megalomaniacal attempt to dominate the musical world – there is something iconic in seeing his name in brass inlay on the lid alongside the reflection of his hands.

Ultimately, the piano is a 19th-century beast that has survived into the 21st century but is threatened by technology and popular culture: as Charles Rosen has pointed out there have been few works composed for the instrument in the past few decades that have really caught the public imagination.

The Workman Not the Tool

I believe Barenboim’s most lasting contribution lies not in his philosophising about music and culture, nor in his political advocacy for reconciliation between Israel and the Arab world (though the West East Divan Orchestra is certainly a wonderful creation) but in his ability to communicate great music to a diverse audience.

His playing may sometimes lack some of the fluency that he once had, and he may be accused of wilful distortion at times, but his command of the drama of Schubert’s late sonatas and his idiosyncratic take on that composer’s melodies and architecture remain compelling.

It turns out that Marshall McLuhan’s statement that the “medium is the message” has little place in music. During Schubert’s lifetime it became fashionable to regard a work of art or music as having its own internal unity, experienced, as Kant suggests, within a flow of representations. Barenboim presents us with memorable representations of Schubert’s music, regardless of the shiny black instrument on stage.

Charles Wiffen is Dean of Music and Performing Arts at Bath Spa University.