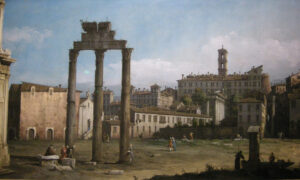 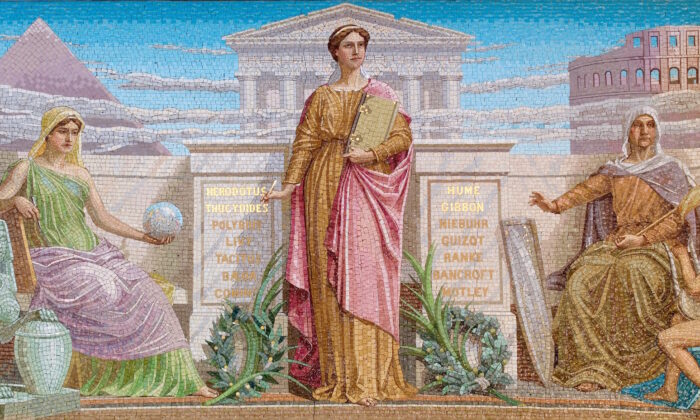 This mosaic by Frederick Dielman shows History in the center, holding a pen and a book. The figure on the left, holding a globe, is Mythology; the figure on the left represents medieval legends and folk tales. House Members Room, Library of Congress Thomas Jefferson Building, Washington. (Public domain)
Life & Tradition

Timeless Wisdom: Why the Founders Said You Should Study History

If there is anything the Founders constantly repeated, certainly one of the most important was the importance of studying history. After all, humanity has been around a lot longer than any of our lifetimes. Our species has thousands of years of experience under its belt. It stands to reason there’s a lot of wisdom to be learned by studying it. That’s what our Founders did, and it’s why they insisted that future generations must do the same in order to preserve our institutions.

John Adams, likewise, insisted on the importance of studying history. Countless quotes could be offered as proof, but one that is often overlooked comes from his early days. He was writing in the voice of the early Puritan governor of Massachusetts, William Bradford, a man he deeply admired.

In his voice, he summarized the sort of knowledge he believed his New England ancestors possess, and which all generations must possess, in order to be free: “The history of nations and of mankind was familiar to us; and we considered the species chiefly in relation to the system of great nature, and her all-perfect author. In consequence of such contemplations as these, it was the unwearied endeavor of our lives, to establish a society, on English, humane, and Christian principles.”

It was for reasons such as these that Adams’s Puritan ancestors established such institutions of higher learning as Harvard University, and why countless generations had done the same in Europe under the auspices of the Catholic Church.

Thomas Jefferson, when explaining the institutions, laws, and culture of his native state of Virginia, focused a great deal on the importance of educating the young, particularly on the topic of history.

“History, by apprising them of the past will enable them [students] to judge of the future,” he wrote. “It will avail them of the experience of other times and other nations; it will qualify them as judges of the actions and designs of men; it will enable them to know ambition under every disguise it may assume; and knowing it, to defeat its views. In every government on earth is some trace of human weakness, some germ of corruption and degeneracy, which cunning will discover, and wickedness insensibly open, cultivate, and improve.”

In other words, history not only disclosed the lessons of practical politics, but would alert citizens to the approach of tyranny.

Benjamin Franklin likewise emphasized the importance of history. “If History be made a constant Part of their Reading,” he said of the young, “may not almost all Kinds of useful Knowledge be that Way introduced to Advantage, and with Pleasure to the Student?”

Reading good history, he said, would “fix in the Minds of Youth deep Impressions of the Beauty and Usefulness of Virtue of all Kinds, Public Spirit, Fortitude.” It would also “give Occasion to expatiate on the Advantage of Civil Orders and Constitutions, how Men and their Properties are protected by joining in Societies and establishing Government.” It would also teach them lessons about economics, and how “their Industry [is] encouraged and rewarded, Arts invented, and Life made more comfortable.”

When it came to the virtue that was so necessary for holding free societies together, Franklin observed that history would show the young “the Advantages of Liberty, Mischiefs of Licentiousness, Benefits arising from good Laws and a due Execution of Justice, etc. Thus may the first Principles of sound Politics be fixed in the Minds of Youth.” Likewise, it would “afford frequent Opportunities of showing the Necessity of a Public Religion, from its Usefulness to the Public; [and] the Advantage of a Religious Character among private Persons.”

And in his Farewell Address, George Washington appealed to the lessons of history when he implored his countrymen to remember that “reason and experience both forbid us to expect that national morality can prevail in exclusion of religious principle.” And before appointing a man as Attorney General of the United States, he inquired as to “what is his depth in the science of politics, or in other words his acquaintance with history.”

In short, our Founders knew that we could only remain a free people if we learned the lessons of history. The human species didn’t begin with us, and (God willing) it won’t end with us.

As I have said many times, we shouldn’t limit ourselves to ourselves. But that is precisely what we’ve done throughout our educational establishment. It has never been easier to access and study the great classics of human civilization. It took our Founders a lifetime and a small fortune to obtain theirs—we could have ours in a few clicks, thanks to the internet. Far from revering the lessons of history, our children are often taught to despise them—or even worse, ignore them.

If we wish to remain a free people, the serious, sober, and, yes, fascinating study of history must once again have a prominent place in American classrooms. Let our children read the great classics of Greek, Roman, Chinese, Arab, Medieval, and other civilizations. Let them ponder human nature by absorbing the experience of so many other humans across so many other times and places.

Along the way, let them learn the humility that such a study necessarily inculcates. They’ll learn that oftentimes, the latest ideas are iterations of the worst ideas—often tried, often failed. They’ll learn to be suspicious of demagogues who attempt to convince them that the problems of the world could be solved by an ideological syllogism, and a utopia is in reach if only those people got out of the way. They’ll learn that moral boundaries exist for a reason, and that while “there is a way which seems right to man,” it often “ends in death.” They’ll learn what happens when societies demolish moral constraints whose purpose they didn’t even bother to understand—and the disaster that invariably results.

Finally, they’ll learn that human nature hasn’t changed one bit over the thousands of years of recorded history. They’ll learn the wisdom that has frustrated countless idealists and revolutionaries, but continually comforts the wise, that “there is nothing new under the sun.” That’s why classics are classics after all: they resonate despite the centuries or even millennia-wide gap between writer and reader. Such would not be possible if human nature could be molded by ideologues, or history remade by fanatics.

The lessons of history ground us. They enlighten us. And most importantly of all, they humble us, and thereby hinder that precipitous fall which unavoidably results from that mother of all vices, that ruin of all individuals and all societies: pride.

These are the sorts of lessons of history our Founders enjoined us to remember and study. The survival of our Republic will depend on whether or not we do.

Joshua Charles is a former White House speechwriter for Vice President Mike Pence, a No. 1 New York Times bestselling author, a historian, writer/ghostwriter, and public speaker. He’s been a historical adviser for several documentaries and published books on topics ranging from the Founding Fathers, to Israel, to the role of faith in American history, to the impact of the Bible on human civilization. He was the senior editor and concept developer of the “Global Impact Bible,” published by the D.C.-based Museum of the Bible in 2017, and is an affiliated scholar of the Faith and Liberty Discovery Center in Philadelphia. He is a Tikvah and Philos Fellow and has spoken around the country on topics such as history, politics, faith, and worldview. He is a concert pianist and holds a master’s in government and a law degree. Follow him on Twitter @JoshuaTCharles or see JoshuaTCharles.com.