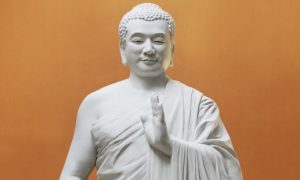 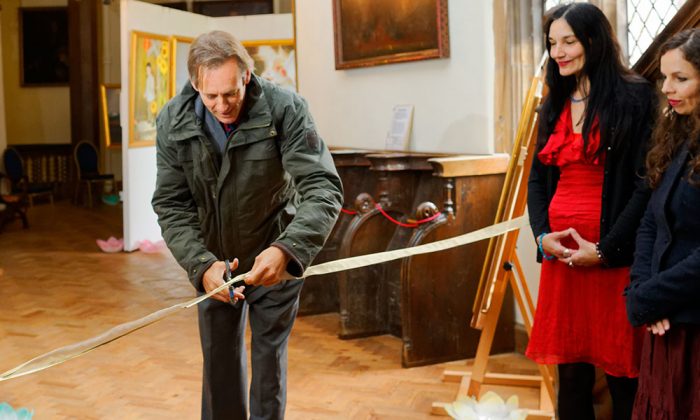 Charles Berkeley opens The Art of Zhen Shan Ren International Exhibition at Berkeley Castle, Berkeley, Gloucestershire. The castle has been in the Berkeley family for over 900 years, making it the oldest inhabited castle in Britain. Mr. Berkeley is the twenty-seventh generation of the family. He is castle director and heir to the castle. (Graham & Julie Harris)
Arts & Culture

She wears her father’s jacket while holding her parents’ ashes; her gaze is tormented. On a wall to her left is the name of a forced-labour camp in Chinese, perhaps where her parents were killed.

The young child depicted in “An Orphan’s Sorrow” is a painting based on true and current events. It is one of the pieces from an international exhibition, The Art of Zhen Shan Ren, on display at Berkeley Castle in Gloucestershire, U.K., until Aug. 12.

Countless children have been orphaned since the persecution of the spiritual practice Falun Gong began in China in 1999. It’s something that Charles Berkeley, Castle Director and heir to the castle, was particularly moved by.

“The pain and suffering etched on some of the children’s faces … and how suddenly they were all alone. They’d lost their parents, maybe their friends, for their belief,” he said.

Such emotive scenes are displayed in the Kings Gallery and Picture Gallery of the castle; their backdrop is historical art and portraits of former Kings and Queens.

It is ironic that the exhibition, which highlights modern-day suppression, is in the Kings Gallery, a place with its own story of imprisonment. In the corner of the gallery there is an opening that looks down on a dungeon rich in history. Accounts say that King Edward II was imprisoned there in 1327 for six months and then murdered for his supposed weaknesses – plotted by his wife and her lover.

Themes of inner-beauty, courage, and hope are narrated by the artists through realistic oil paintings. The pieces are more than just beautiful art.

Berkeley said that the paintings show how people can find peace and harmony in life despite the chaos.

“Visitors may get a renewed sense of calm after coming to the exhibition.”

The exhibition is on until Aug. 12, 2015, at Berkeley Castle, Gloucestershire. Entry is included with Castle admission.