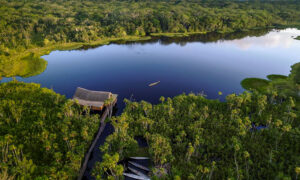 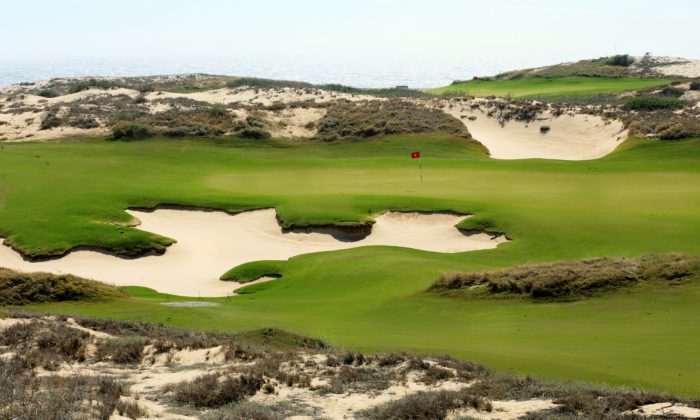 The short par-4 4th at Diamante Dunes—tempting much and testing all. (Maureen A Vaccaro)
Destinations

Tiger Woods to Open His First Golf Course in Mexico

Conquering golf courses has been on the agenda for Tiger Woods since he appeared on the “Mike Douglas Show” in 1978 as a two-year-old child prodigy. Since then, the world’s number one player has placed himself among the peak of the game’s all-time great players. Now Woods is moving into another arena—golf course design.

Later this year Woods will unveil his first golf course design—located in Mexico in the greater Cabo San Lucas area as the second course to open at the renowned Diamante property.

Woods appears to be following in the footsteps of past golf champions who have designed courses in the area, including Arnold Palmer, Davis Love III, Tom Weiskopf, Greg Norman, Ben Crenshaw, and Gary Player. Transitioning themselves from hitting golf shots to designing courses carries on their respective legacies far beyond their individual accolades. Speaking of legacies, the leader in major tournament wins Jack Nicklaus is also the leader in course designs in Cabo, as he prepares for the opening of his sixth course set to open in the fall.

Yet, for Woods the design involvement has thus far been a stalled process.

His first planned project was to be in Dubai—called Al Ruwaya (Serenity)—but was suspended in 2009. The desert has reclaimed the fairways there although, according to PGA.com, Tiger was reportedly paid over $50 million for his work.

His first American course was planned for a development in North Carolina at The Cliffs. It too stumbled as the company went into bankruptcy when sales tanked. Woods had originally planned to be in Mexico sooner with a spectacular oceanfront property at Punta Brava near Ensenada, roughly 70 miles south of the border from California. That project was announced days after Tiger won the 2008 U.S. Open, but also fizzled out when Lehman Brothers went belly up financially and sank much of the golf real estate industry with it.

Tiger Woods Design opened its door in 2006 and Woods is looking to expand his global empire through the development of golf courses carrying his name. In a press release from Diamante last October, Woods said: “Our goal at Tiger Woods Design is to find locations to design unique and memorable golf courses. Diamante definitely meets that objective.”

Tiger’s Mexico course is named El Cardonal. Its a par-71, 7,401-yard layout, is planned for a Fall 2014 opening–with an expected green fee of $275. Only property owners and those staying at the soon-to-be-created hotel on-site will have access to the course.

“We believe a Tiger Woods Design course will be the perfect complement to Davis Love III’s Dunes Course and will embody the high standards we have set at Diamante,” said Diamante CEO Ken Jowdy in the same press release. “Diamante’s El Cardonal Course will look and play very differently from the Dunes Course,” he added.

Diamante gained a major place in golf circles when it opened its first course—The Dunes—in 2012. Designed by PGA Tour Star and former American Ryder Cup Captain Davis Love III, The Dunes Course hugs the Pacific Ocean and includes massive untamed natural dunes of varying shapes and sizes forming a natural boundary for many of the holes. Unlike most Cabo courses, which are on the Sea of Cortez side, Diamante adjoins the Pacific and wind conditions are more challenging. The Dunes quickly garnered critical acclaim and is rated among the top 100 courses globally by Golf Magazine (52) and Golf Digest (55).

The issue is can the sequel rise, or even exceed, the benchmark created by the original course?

“My initial thought is that it will be hard to live up to expectations of the Tiger Woods name,” said award-winning golf architect Jim Engh. “I am sure the course will be good-to-great and certainly there will be anticipation to review it.”

El Cardonal resides on land much higher into the property than The Dunes, and while not having holes immediately near the Pacific, the views will be no less stunning. Speculation abounds on how the course will handle the needs of daily players and those at the world-class level. Long time architects—specifically orientated in creating courses capable of elasticity—routinely face this high hurdle.

The scrutiny of El Cardonal will be intense. Anything Woods does is almost always news. The stakes are high but credit goes to Woods and his team for using the stunning Diamante location as the potential springboard for future projects.

Selectivity can be a major plus. The architectural tandem of Bill Coore and Ben Crenshaw has established their reputations as a talented duo, which only seeks the most unique properties. Will Woods follow the approach of “less is more” or will he ramp up design matters in hiring a much larger team—engaging in several or more course projects at the same time? Juggling his design interests with an active playing career—in addition to raising his two children—can mean a very tight time allocation for all his endeavors.

Woods has been to Diamante no less than half a dozen times, but the skills needed for quality design goes much deeper than site visits. It’s having the innate talent to unearth magical holes literally from the ground-up, all while making it appear as if the final product looks as natural as possible. Indeed, art and science lie at the heart of the design challenge.

Beholding the Diamante property for the first time is a mesmerizing experience. Getting golf facilities to be immediately adjacent to major waterways—particularly the Pacific Ocean—is more rarity than reality. Diamante will provide a slew of amenities and activities befitting its stated desire to be a prime global getaway—adding to the considerable reputation Cabo has garnered on the golf front in such a short time.

Going back to the 1930s and 1940s, Cabo quickly caught on as a convenient nearby getaway location. Hollywood celebrity types—John Wayne and Bing Crosby, among others—routinely flocked there for world-class fishing and the wherewithal to keep the prying eyes of intrusive paparazzi at bay.

Interestingly, the golf side of things in Cabo only started in earnest in the early 1990s. Cabo’s total golf portfolio is not large when compared to other top tier global golf destinations; however, the smaller number of courses has kept the appropriate balance between supply and demand.

During the go-go period of golf course construction in the 1990s, Cabo’s address was among the world’s hot spots as international attention accelerated. In 1992, Palmilla opened—the first Jack Nicklaus design in Latin America. The original 18-hole layout—Mountain & Arroyo—expanded in 1997 with the Ocean nine.

One year later, Robert Trent Jones, Jr. designed Cabo Real; the layout smartly blends two distinct nines. The outward half uses the higher terrain of the desert, while the inner side works toward and eventually away from the Sea of Cortez.

Cabo Real is part of Questro Golf and has several other golf properties in its portfolio. Club Campestre San Jose opened in 2007 as did Puerto Los Cabos. Club Campestre, located off the toll road from the airport, is another Nicklaus design and is quite playable with severe greens in spots—most notably the vexing short par-four fifth hole.

Puerto Los Cabos, several miles removed from the main roadway, is located at the base of the Sierra de la Laguna Mountains—the gateway between San Jose del Cabo and the refreshing atmosphere of Los Cabos’ rugged and unspoiled East Cape coastline. A composite layout of nine holes each from Nicklaus and Greg Norman respectively make up the Puerto Los Cabos golf option—with plans for each designer to extend their corresponding layouts to a complete 18 holes.

The Nicklaus course that got the ball rolling came in May of 1994 at Cabo del Sol. The Ocean Course starts with nary a clue on what awaits. Like a good book, the qualities emerge slowly building to a tour de force climax. At the long par-four fifth, you tee off high above the fairway—the Sea of Cortez a glistening backdrop. Two par-three’s come in succession—each well crafted and working well in the overall routing.

The inner half follows the same pattern as the outward nine. You play away from the Sea of Cortez, then head back for the stunning conclusion. The phrase “must play” is often bandied about mindlessly; it resonates most certainly at The Ocean Course.

Four years later Nicklaus designed El Dorado. The layout works up and down from desert terrain to the Sea of Cortez and is much more than just rudimentary golf. In 2004, El Dorado became a private club but access from select hotels is doable.

The spotlight on Cabo in 2014 will not simply be focused on Diamante alone. Woods will also face competition from Nicklaus as the Golden Bear’s long awaited design effort at Quivira Los Cabos—located just south of Diamante—is set to open as well in 2014. The allure of golf and Cabo only grows stronger—now even more so. Golf’s two greatest players will display their personal respective visions on what they view as quality golf design. How will they both fare? We shall soon see.