'I thought God was there' 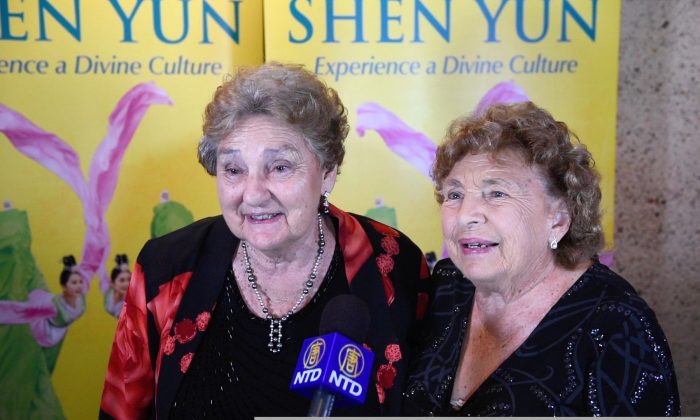 Sisters June Singleton and Mavis Gardiner sharing a gift more beautiful than they could imagined, Shen Yun Performing Arts at the Lyric Theatre on Feb. 27, 2016. (Courtesy of NTD Television)

BRISBANE, Australia—Sisters, June Singleton and Mavis Gardiner, felt Shen Yun Performing Arts was uplifting and even more beautiful than they had imagined after seeing the performance at the Lyric Theatre on Feb. 27.

“It was beautiful. It lifted us out of the violence in the world now, it just brought beautiful things and peace and happiness. And all the performers, they were so happy and perfect,” Ms. Singleton said.

Ms. Gardiner, felt she had also been transported to another realm: “Up there somewhere, my soul soared. It took me up there, my soul went up there. I was just wrapped in the whole thing. It was wonderful!” she said.

Ms. Singleton, a retired school teacher, had bought the tickets as a gift for her sister after she had seen a televised promotion in a supermarket and experienced a strong feeling that Shen Yun was something she had to share with her sibling. At the time the sisters did not know how special Shen Yun was and how wonderful it would be to see it together.

Based in New York, Shen Yun’s mission is to revive China’s traditional culture which was almost lost under communist rule.

“Through the universal language of music and dance, Shen Yun weaves a wondrous tapestry of heavenly realms, ancient legends, and modern heroic tales, taking you on a journey through 5,000 years of Chinese culture. Its stunning beauty and tremendous energy leave audiences uplifted and inspired,” the website states.

“Mortals and divine beings merge on stage as one. Principles such as benevolence and justice, propriety and wisdom, respect for the heavens, and divine retribution, all come to life, washing over the audience.”

I felt my soul just soaring. I have never felt like it with any other show.
— Mavis Gardiner

Ms. Gardiner, a volunteer in her church, felt the presence of the divine in Shen Yun. “I felt God was there, it was beautiful. We were crying a couple of times,” she said. “I felt my soul just soaring. I have never felt like it with any other show.

“Thank you so much for what you have given us. It was wonderful, just wonderful … We will never forget it,” she continued. “You just soar with it, it lifts you.

“You think it can’t get any better and it gets better,”  she added.

There were so many aspects to Shen Yun that the sisters loved.

“It was beautiful! The colours, the background, everything. It was perfect,” Ms. Singleton said.

The Shen Yun Orchestra, a blend of traditional Chinese and classical Western instruments, plays original scores written for each dance which also adds depth to the performance, the sisters noted.

“The music makes it too, the music was beautiful,” Ms. Gardner said.

As a teacher Ms. Singleton said Shen Yun would be wonderful for students to see.

“There was so much in this, the history of China, it came through and then the modern, what’s happening in China today, that educated us too. It was wonderful, the beauty and the culture, the history, it was beautiful.

“As a teacher, it would be a wonderful incentive for them to learn more, it really would,” she said.

The sisters said they would be back next year with family and friends as well.