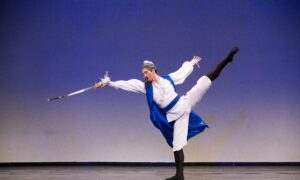 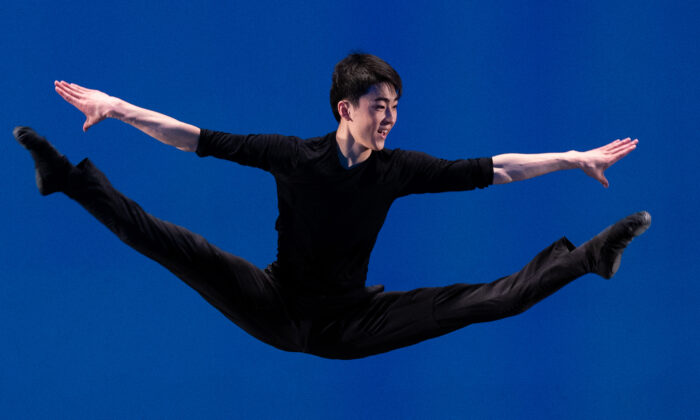 Michael Hu was captivated by the gravity-defying leaps and depth of storytelling at a Shen Yun Performing Arts performance. It initially sparked his dream of becoming a dancer. (Edward Dye)
Feature

Through Classical Chinese Dance, a Grander Vision of the World

The first time Michael Hu saw Shen Yun Performing Arts, he was filled with excitement and struck with the idea that he was going to be a dancer. If a picture told a thousand words, then Shen Yun was a series of pictures that added up to a performance capable of conveying 5,000 years of divinely inspired culture, he said. It was exciting, grand, and profound—Hu said he wanted to tell stories with that sort of depth too.

“It was mostly stretching,” Hu said. “I didn’t really like it.”

The gravity-defying leaps, flips, and tumbling techniques of classical Chinese dance require a limber and flexible dancer, and it takes a natural affinity or great amount of work to achieve that foundation. So Hu’s dream was put to bed.

“Then in 2016, that’s when it all changed,” Hu said. He was about to attend an arts academy to study the trumpet, but at the last minute, his parents asked, why not try classical Chinese dance? He could study it for a year, or a few months, and if he still didn’t like it, he could switch back to music.

It turned out the first year was full of stretching, and sometimes painful stretching at that. But once he had the fundamentals, the dancing began, and from then on, Hu was committed. Every painful moment he endured, every repetitive exercise he stuck with, was all worth it, as his dream of becoming a dancer became ever clearer—until it was right in front of his eyes and he achieved that dream of touring with Shen Yun Performing Arts, the world’s premier classical Chinese dance company. Hu said that every time he sees the audience’s faces during curtain call, he’s filled with gratitude and fulfillment.

Recently, Hu has been preparing to go on stage solo—the NTD International Classical Chinese Dance competition preliminaries have been taking place all summer, and the semifinals will be on Sept. 4, and the finals and awards ceremony on Sept. 5.

“I want to gain more stage experience,” Hu said. For him, it’s not about competing with others, but a chance to take to the stage alone and see if he can really shine.

For the competition, he’s preparing a storytelling dance about one of the greatest warriors of China—but not during a moment of triumph. Near the end of the war, Xiang Yu is surrounded during the Battle of Gaixia and has a moment of near-defeat. The story turns introspective as he thinks about the series of events that led him to the present, and regrets not killing the opposing general back when he had the chance.

“Here, he makes his last stand,” Hu said. The great warrior comes to the realization that no matter his brilliance, skill, or prowess on the battlefield, if the heavens don’t will that he claims the throne for the emperor, such fate is out of his control.

There’s always something higher above you that plays a role in your life.
— Michael Hu

“There’s always something higher above you that plays a role in your life,” Hu said. Stories like this in the first Shen Yun performance he saw were what drew him in, he said—there isn’t just good and evil facing off, but higher powers that speak to the meaning and purpose of humanity.

“Because I was raised in America … I don’t get to understand all of the Chinese culture, all the 5,000 years of it,” he said. Yet Shen Yun was able to clearly convey the essence of the culture to him, as well as to audience members from different cultural backgrounds and walks of life.

“It’s beautiful in a way where people can simultaneously understand it,” he said. “And they realize it’s much more beautiful than what they imagine.”

This is Hu’s first time entering a dance competition, and this particular one has Shen Yun artists and alumni on the judge’s panel. Though classical Chinese dance is an art form that has been passed down for thousands of years, it was virtually unknown in the West until Shen Yun put it on the map. The New York-based arts company has not only brought the dance to the world’s stage, but taken it to new heights.

In classical Chinese dance, there’s a method of using the body to lead the arms and the waist to lead the legs; many dance schools and dance companies talk about it, but Shen Yun and its feeder school Fei Tian Academy of the Arts are the only ones that teach it.

It’s a method in which the force of every movement begins at the body’s center, leading to a grander effect on stage with bigger gestures and higher jumps; it’s simple, but not easy.