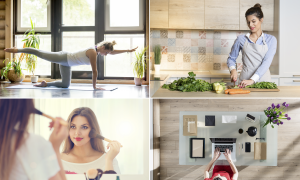 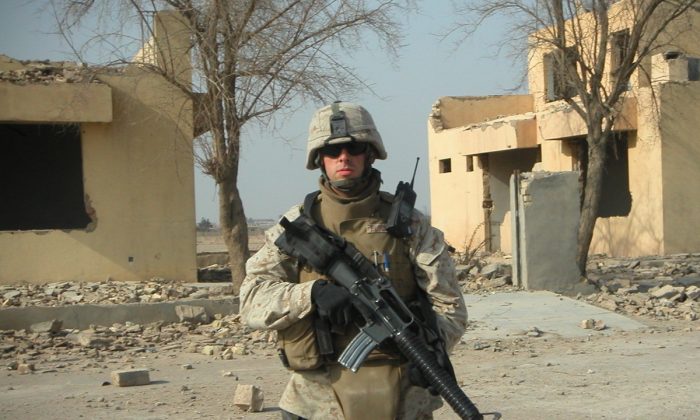 A lot of political, social, and economic progress has been made in this country’s history. However, core virtues and values that have made the both the individual and society great may be getting lost.

The Epoch Times had the opportunity to speak with three United States military veterans on the principles they learned in boot camp and on deployment, and how everyone is capable of applying these principles to lead a virtuous, successful, and happy life.

Nick Benas, Matt Bloom, and Buzz Bryan were all deployed together to Iraq from 2004 to 2005. While they joined the military for different reasons, all had a drive to serve the nation.

Bloom joined the Marine Corps at age 21 in search of direction and purpose. He also had a desire to pursue a career in law enforcement, and knew experience in the military would help him prepare for it.

Benas always wanted to join the military growing up, and during his freshman year of high school he learned about the rich history of the Marine Corps. He enlisted at age 18.

Bryan’s father was a fireman and Vietnam War veteran, and his grandfather was a veteran of World War II. He grew up in a pro-military household, and enlisted in the Navy when he was 18.

While all three were in boot camp, they learned lessons, principles, and virtues that they would carry on through their deployments and throughout the rest of their lives.

One of the most important virtues all three learned was discipline. Without discipline it’s impossible to attain the other virtues necessary for living a wholesome life.

“Once you have the basic discipline, everything else comes into practice. They [the Marine Corps] teach you more about being a human, about being a Marine, and doing the right thing,” Bloom explained.

The Marines and sailors are also broken down so that the Marine Corps and the Navy can build them up and instill the virtues and values necessary for success.

The Marines and sailors also have to learn the discipline to follow the drill instructor’s orders even for the simplest tasks.

For instance, the Marines are told when to shower, when to shave, when to get dressed, and when to eat. Furthermore, there is a specific time limit for each task. If they don’t do exactly as ordered, punishment follows.

For example, Bloom made the mistake of not hearing the order to take his canteen to the chow hall one day. One of his instructors whispered in his ear asking where his canteen was. Bloom tried to mumble something, but the instructor yelled at him in front of everyone.

The instructor asked Bloom what he was supposed to tell his mother when he was dead because he forgot his canteen. He then proceeded to kick everyone out of the chow hall.

Everything the Marines and sailors did during training and the orders they followed prepared them for the world outside of boot camp.

There is also a reason for every drill, order, and routine. For instance, when carrying a glass of milk, the Marine is instructed to carry it like he would a grenade so the posture becomes second nature.

Another example involves the habitual checking of one’s rifle, in order to be positive of where it is and whether or not it is safe.

By the time the Marines and sailors are deployed, the virtues and lessons that have been instilled in boot camp have become second nature.

The three men deployed together in 2004 to Iraq. The lessons and principles they had learned in boot camp would prove to be life-saving, and vital to accomplishing their mission.

Bryan was a Navy corpsman, and wanted as many of his Marines as possible to have a basic understanding of what to do if someone was wounded.

He taught them basic first aid, how to insert an I.V., and how to apply a tourniquet. On one of their first patrols, the convoy got hit.

Before Bryan could even get to the casualty, the Marines had already begun treating him, and had already applied a tourniquet.

“They saved a life that day,” Bryan said.

In another instance, Bryan was filling a vehicle with diesel and it exploded on him. Benas had just gotten back from a patrol, and was supposed to have a day of rest.

Nevertheless, he immediately took Bryan’s spot. The virtues of decisiveness and integrity allowed the patrol to commence while Bryan got cleaned up.

“We have so much faith in the Marines and sailors we’re operating with. You always know they’re going to do the right thing, and that’s what gets you through,” Benas said.

Benas, Bloom, and Bryan decided to write about their experiences and the lessons they learned during their service in a book entitled “The Warrior’s Book of Virtues: A Field Manual for Living Your Best Life.”

Moreover, they wanted to show how the virtues they learned could be translated to civilian life.

They believe there is a sense of entitlement, desire for instant gratification, and lack of direction in our society, which can cause personal and professional problems.

Living by the virtues they discuss can help people live a happy, meaningful, and successful life.

For instance, when issues such as poor health, self-absorption, and professional success arise, the virtue of discipline can help one address those issues. To achieve discipline, it’s crucial to be honest with oneself, determine why one lack discipline, set goals, and be committed.

If one lacks the virtue of prudence, it’s easy to become careless, forgetful, and financially irresponsible. In order to live prudently it’s important make priorities, have a plan, and hold oneself accountable.

When one finds themselves procrastinating or feeling insecure, it’s a sign that one lacks the virtue of decisiveness. By being assertive and making decisions in a cool-headed manner, one can overcome these issues.

The main message of the book is that anyone, with or without of military service, is capable of employing these virtues to achieve a good life.

“We want to kind of create this accountability and awareness to be responsible for your own actions. You have the ability to choose the right attitude. It’s your decision and no one else’s,” Benas said.