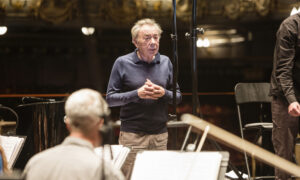 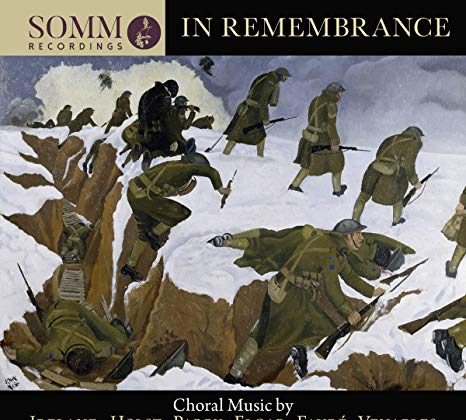 'For The Fallen,' 'Lest We Forget,' and 'In Remembrance'
biggersmaller
Print

The centenary of the Armistice has inevitably called forth musical responses, and the centenary of Hubert Parry’s death has meant that that composer’s work features heavily. Some choirs have moved away from recordings of Parry’s “Songs of Farewell” and given some interestingly imaginative ideas on disc.

William Vann and the Chapel Choir of the Royal Hospital Chelsea bring two secret weapons into play on their disc “In Remembrance.” Firstly, they are joined by a choir of Chelsea Pensioners (residents of the Royal Hospital Chelsea, a retirement/nursing home in London for former members of the British Army) for three hymns—albeit ones of distinguished pedigree: Parry’s “Jerusalem,” Charles Harris’s “O Valiant Hearts,” and “I Vow to Thee, My Country,” which is adapted from a melody by Gustav Holst (who hated the hymn!). This gives the music a real presence that simply having it sung by a regular choir never would and does lift the program.

The other secret weapon is British pianist, organist, composer, and arranger Iain Farrington who has arranged new versions of Gustav Holst’s “Ode to Death,” which is a setting of Walt Whitman’s poem, and Faure’s “Requiem.” Holst’s setting of the poem was very much his response to the First War (in which he served), and it is good to see this large-scale and sophisticated work performed. And Farrington’s imaginative reworking of the orchestral score should win it many devotees, especially in this fine performance.

Why another new version of Faure? Well, Farrington has arranged Faure’s orchestral score for organ, rather than simply relying on the hack piano reduction from the vocal score. Vann and his forces take advantage of the smaller scale to give a reading of concentrated intimacy.

Over at Chichester, Charles Harrison and his choir give us a program of music by British composers who lived through the war, with the addition of an anthem by Peter Aston (1938–2013). The disc commemorates the choristers who died in World War I.

The whole disc is released in support of the charity Combat Stress, which was set up at the end of the World War I to support the mental health of those who were affected by conflict.

The disc opens with a terrific account of Charles Villiers Stanford’s “For Lo! I Raise Up,” a remarkably direct response to the war with a setting of a vivid text from Habakkuk, which receives a virtuoso performance.

Later on the disc, Harrison gives us a movement from Stanford’s Sonata No. 2 “Eroica,” which was dedicated to the French composer Charles-Marie Widor. Also on the disc is Parry’s Tennyson setting, “Crossing the Bar,” and “There is an old belief,” with words by J. G. Lockhart, from “Songs of Farewell.”

The issue with Stanford and Parry was, of course, that their music was rooted in the culture of Germany, and the war hit them in multiple ways, both culturally as well as with the loss of so many of their students. It says much for Parry’s and Stanford’s teaching that they raised generations of composers who clearly identified as British without the link to German culture. On the disc, we have Edgar Bainton, John Ireland, and Gustav Holst, alongside the older generation, Clement C. Scholefield and Edward Elgar. The program mixes the well-known and the lesser-known, anthems, hymns, and more, and ends with Herbert Howells’s “Te Deum” from his service Collegium Regale.

Under conductor Matthew Altham, Pegasus choir eschews the nationalist route in “For the Fallen” and also avoids hymns, instead giving us a thoughtful program of music from across the Continent by composers who lived through World War I, with the exception of Gustav Mahler.

The disc opens with a profoundly concentrated and intimate performance of “For the Fallen” by Douglas Guest (1916–1996), and throughout the program, it is the sense of intimacy and concentration that strikes one.

The movements from Rachmaninoff’s “All-Night Vigil” are the best-known pieces on the disc, and these too date from 1915. There are two Ivor Bertie Gurney pieces, choral music from a composer best known for his songs, and again Stanford’s “For Lo! I Raise Up,” and an anthem by George Dyson, who served in the war and was sent home with shell shock. The last item is one of Clytus Gottwald’s virtuoso arrangements, of Mahler’s “Ich bin der Welt abhanden gekommen.”