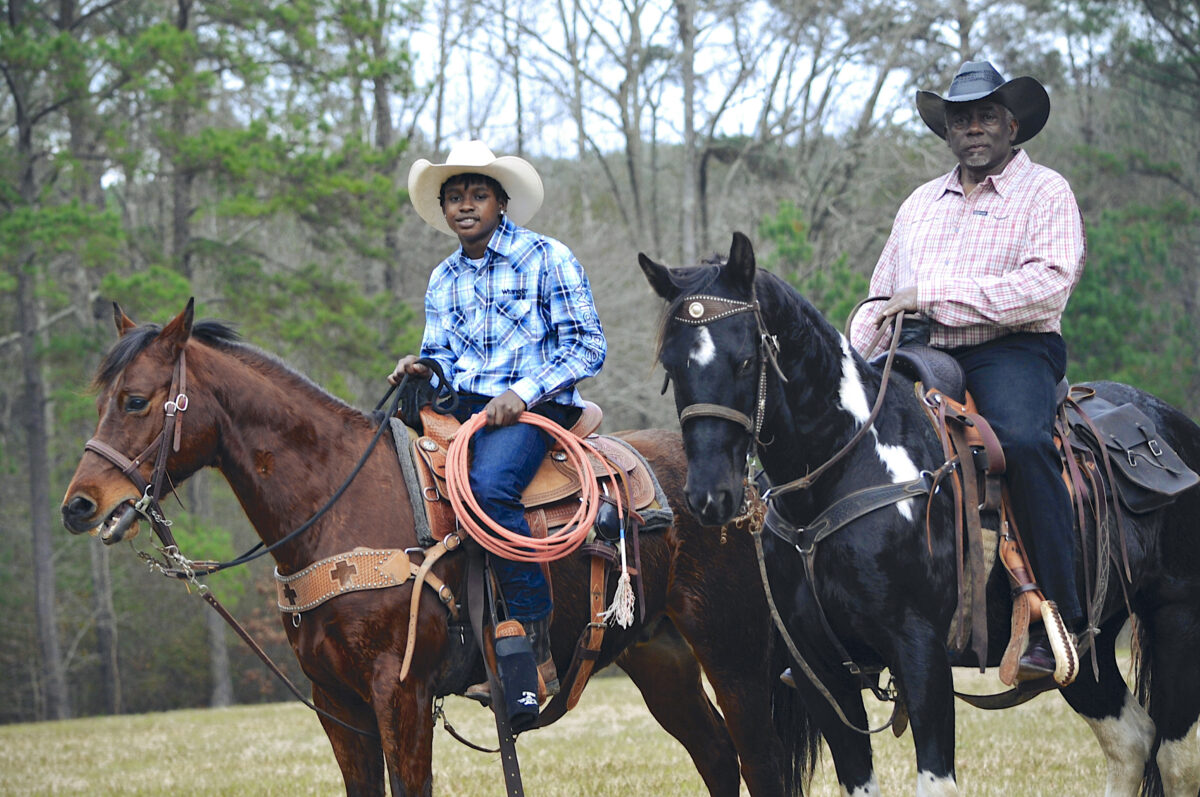 Young Rodney Howard is continuing his family’s lineage of cowboy sporting, under loving guidance from his grandfather
BY Karim Shamsi-Basha TIMEMay 27, 2022 PRINT

Thirteen-year-old Rodney Howard looks like he galloped right out of a Western movie set. He’s sporting leather cowboy boots, wide-legged jeans, a belt with a huge silver buckle, a flannel corduroy long-sleeve shirt, and a worn-out cowboy hat. This is not your souvenir-shop cowboy hat. This hat has seen some action—rodeo circuit action.

The outfit goes along with Rodney’s life dream of becoming a rodeo star. Before Rodney spoke about his dream, he practiced his lasso techniques with his grandfather and mentor, Ronald Howard. The two cowboys ran their horses back and forth in a field behind Ronald’s home in McCalla, Alabama. They swung the lassos over their heads, then threw them forward, as if to catch a calf that was trying to escape. Afterward, they settled on two ancient rocking chairs on the front porch.

Rodney Howard looks like a 50-year-younger version of Grandpa Ronald. He has been competing on the rodeo circuit and has recently won four belt buckles and the International Miniature Rodeo Association World Senior Champion title.

Grandpa Ronald is proud of his grandson. “I taught my grandkids to ride as soon as they were old enough to keep their heads up, about 1 year old. I learned to ride following my grandpa. Then, I went to trade school but kept on riding. I also started teaching other people how to ride.”

Later in his life at the age of 40, Grandpa Ronald began competing in rodeo. He excelled in two sports: team penning and team roping—separating cattle into pens and catching cattle by the horn using a rope. He still competes, but his highest prize is not from rodeo competitions. “Now, I ride with my grandson. It’s the best thing in the world. How many grandpas can say they ride with their grandson for hours every day? I talk to him about everything, and I hope he is listening,” Ronald said, grinning at his grandson seated next to him. “We sometimes compete, Rodney and me, and I let him win.” They both laughed.

But Ronald is not the only one who loves riding together. “I love riding with my grandpa. Not many his age can ride for five hours, but he’s fit and can do it. It’s cool,” Rodney said.

To him, rodeo is much more than a sport. “This’s my big dream that I’m following. I want to make the NFR one day—National Finals Rodeo. That’s the Super Bowl of rodeo,” Rodney said.

Rodney pulled his phone out and showed his grandfather the last video of him competing on bucking horses. Ronald beamed with pride as he watched his grandson ride what appeared to be an insane animal running faster than a bullet while jumping in all directions.

In the video, Rodney shakes his grandfather’s hand before going out to ride. Rodney grinned. “I always shake Grandpa’s hand before the horse takes off. It’s my good luck charm,” he said.

Rodney pointed to the crazy horse trying to throw him off. “I love riding these bucking horses. Some might think it’s scary, but you get this insane feeling, and your heart beats super fast. Like I said, it’s my dream in life.” Then he gazed at his grandfather, adding, “After school.”

Ronald grinned and patted his grandson on the shoulder. “School comes before the rodeo. He can attend a college that offers a rodeo scholarship.”

Grandpa Ronald stood up and declared it was time to ride again, and Rodney followed his mentor toward the barn. On the front porch, the ancient rocking chairs slowly settled. They are there to usher in practice every time—every run consisting of fast horses running, lasso throwing, and big dreams coming true.