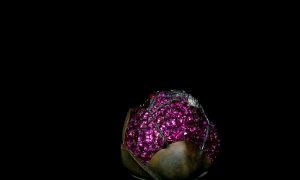 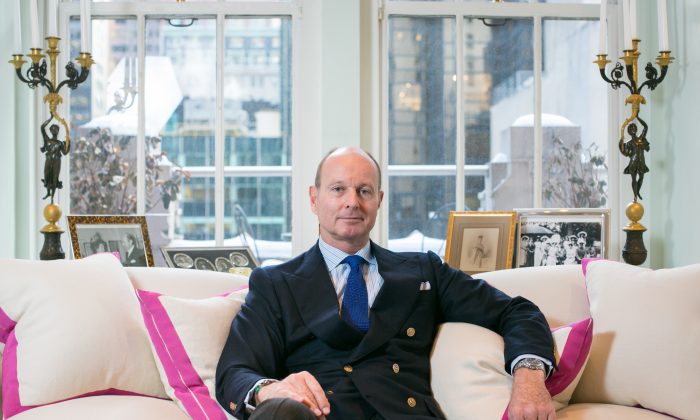 Prince Dimitri of Yugoslavia describes how he designs his jewelry using the Golden Ratio in his atelier in Midtown Manhattan on Jan. 30. (Benjamin Chasteen/Epoch Times)
Special - ARTS & LIVING

The Multifaceted Prince Dimitri of Yugoslavia

NEW YORK—Every stride he takes into his jewelry salon and atelier imbues a sense of certainty, dignity, and purpose. He pauses briefly in front of his chair, then glances over as he flicks the sides of his vented blazer before sitting—perfectly erect.

The flapping sound calls for alertness to the present moment.

He graciously offers tea or coffee, and chocolate. The colorful swirling design of the napkins on a glass table holding a collection of family photos, conjures childhood memories. The salon is arranged symmetrically with portraits of both of his grandmothers (Queen Marie José of Italy on the right and Princess Olga of Yugoslavia on the left) on each side of a large window to a terrace, which looks over 57th Street in the heart of the most prestigious retail area of New York City.

Jewelry “just fascinates me. It talks to me. It just resonates. … I have a complete chemical affinity with stones, jewels, all metals,” Dimitri said.

His assistant brings out one masterpiece after another, starting with a multistrand necklace inspired by maharaja’s treasure. It is draped with sapphires and emerald beads, and at the top edge with floating moonstones. It’s clasped on the side with a lotus flower—a symbol of enlightenment—which can be detached to become a broach, or at the flower’s center, a 42-carat carved Colombian emerald can be removed and worn as a ring.

He shows the original drawing he made from which the beautiful necklace emerged and explains how the design evolved. The sapphires originally placed in a regular pattern looked too heavy, so he finished the design by sprinkling them gradually across.

The backs of each piece are just as beautifully crafted as the fronts, and many have a touch of surprise, like his emerald tree piece. The imaginary topiary, inspired by the wooden cachepots in the Orangerie of Versailles, reveals an inscription: “For those who listen, even stones speak.”

And it all takes place at his desk, lined with colored pencils sticking out of jars and mini tote bags. Asked what inspires him, in addition to feeding his imagination by doing research, reading books, and going to museums and events, he said, inspiration “is just there.” There is no ambiguity.

Designing, he affirms, is the most rewarding part of his life. He said, especially “when the piece that I designed arrives. When it’s finally made and I can see it. It’s always great fun. … It’s just the pleasure of seeing what you put on paper little by little sort of grow into reality—the crystallization from the thought form into physical form is very exciting.”

“They didn’t tell much of those stories, because it was a bit painful. You know when the coup happened they lived for a while in Kenya and South Africa under house arrest by the British actually and then afterward … I think it was in the early ’50s maybe 1949, that they moved to Paris,” he said. It’s as if they indicated it would be better to look toward the future and a new world.

Prince Dimitri grew up near the Palace in the City of Versailles, now a suburb of Paris, with lots of jewels around him. At age 15 he saw the crown jewels in Tehran twice within a week, because he was so obsessed with them. He did not know designing jewelry would be his calling until decades later.

France’s government became socialist in 1981 with the election of François Mitterrand. Prince Dimitri was worried that the Soviet Union could potentially take over and that the country could end up behind the Iron Curtain. “I kind of got paranoid at the idea of all that,” he said.

About socialism and communism he said, “It has polluted the mentality [of people]. It has pitted everybody against everybody. The rich against the poor, women against men; everybody is a minority; everybody is a victim. They hate success. If you have money they assume you stole it, that you don’t deserve it. It’s like ‘No, I worked hard for it.’ But that is their mentality.”

So after finishing his law degree, in 1984 he moved to New York.

Like jewels, the city also fascinated and resonated with him. “In New York you feel like you can breathe. … It is a city in perpetual transformation, but the energy is always the same: of looking forward, of improving, of changing, of new fun things to do. That’s what New York is about, unlike Paris or London or Rome, which is all about the past. New York is all about the future.”

He worked for 18 years in the auction jewelry business at Sotheby’s. Until one day a friend of his showed him a pair of new cufflinks.

“He was coming back from Brazil and he said ‘look at my cufflinks aren’t they fabulous.’ And I said ‘Yes, the stones are fabulous but the mounting is horrible!’ And he said, ‘Really what should we do.’ I said ‘I have an idea and you are going to think I’m crazy.’ I said ‘You are going to drill a hole in the center of the stone and you are going to set a diamond in the middle, or a ruby, or an emerald, or a sapphire,'” Dimitri recounted.

The cufflinks design, worth approximately $2,500, then expanded into a line of what he calls, the Lazy Ring, or Rock ‘n’ Roll ring, because the stone moves around as it’s attached to a loop mounted on the ring.

“Jewelry should always be a little playful, I find. It’s more chic,” he said in his mostly French accent.

The lazy ring “also forces you to be careful of how you move because you are constantly reminded of its presence … you have to control your gestures with it,” he emphasized.

It reflects, in part, his demeanor: rather measured and entrenched within an undeniable royal heritage, yet playful, creative, and fluid—perhaps inspired by growing up in the “groovy ’60s,” a time he recalls with an air of nostalgia.

“When you lived it in the ’60s at my age it was all fun and there was something fresh about it … in 1968 I was seeing it from the eyes of a 10-year-old, there was lots of colors and fun music.”

That sense of fun also comes through in his bespoken pieces, which account for about 60 percent of his business. He can use the gems of a “boring, perfectly polite” necklace and update it. “If you bring it to me, then I’m going to make it look fun and it can have a new life,” he said.

All The World’s a Stage

But jewels are only one facet of Dimitri’s multifaceted life—an exile, a prince, an entrepreneur, a jewelry designer, a philanthropist, a lover of the arts and classical music, and a New Yorker of 30 years, to name a few. Besides seeing crown jewels at age 15 he also started meditating at that age after a very “interesting” and “psychic” friend of his mother’s taught him a few methods and introduced him to some books.

Although born with privilege, life is still full of challenges of course, so he feels very strongly about self-improvement. In New York he has the freedom to expand beyond his heritage and birthright as a prince.

“It’s part of who I am born anyway and then I have my other identity of being just a regular human being. And all of this is theater. If you believe in reincarnation and all these things that I believe in, the prince thing is just one lesson that I came here to learn and one aspect. … It’s who you really are, what you are in your heart [that matters].”

He meditates at home every day, and for brief periods at work.

Meditation “creates a sort of emotional buffer zone in your life so when things go badly, you have the capacity of stepping back and being also the spectator and not only the actor,” Dimitri said.

But his Christian and Buddhist ethics, “without dogma” he emphasizes, does not necessarily guide the direction of his work, as much perhaps as the Golden Ratio (Phi 1.618) does.

“This ratio, according to Plato and Phidias, makes the difference between static and dynamic harmony.” Therefore “building a shape that has that ratio will vibrate and will have a special energy,” Dimitri explained.

It’s exemplified in Leonardo DaVinci’s famous Vitruvian Man, in the layout of the Versailles Palace, in the DNA double helix; in the way leaves grow on the branch of a tree, in the compartments of the Nautilus seashell around the center helix.

Dimitri said that the ancient Greeks felt the Golden Ratio was “a clue that God left in nature for us to discover and understand that he was there watching over us and encouraging us to have a spiritual life, and to be responsible for our own spiritual evolution, which was meant to go back to God.”

When asked about the meaning of beauty, Prince Dimitri simply said, “You don’t explain beauty. It’s there, or it’s not.” Then he admits it might have something to do with the Golden Ratio or divine proportion.

Perhaps the best representation of this ratio in his jewelry would be his Dodecahedron, one of the five Platonic shapes. He interviewed three top jewelers, two who said it would be an impossible undertaking and the third who gave it a try.

The joints of the 12-sided polyhedron are seamless, and each leg has five sides, with five diamonds cut in five “so that it would fit into the narrative of divine proportion,” Dimitri said. It took a year and a half to complete in Italy. Afterward, the Prince visited one of the jewelers who refused his proposition and he said with a mischievous, knowing smile, “I gladly dangled it in front of him one day and said, ‘Want to see something impossible.'”

Dimitri is involved in various boards, including Casita Maria Center for Arts and Education for Latin children living in the Bronx.

“You have to do that. It’s part of the American system,” he said. “And it’s part of Christian ethics of sharing, compassion, of ‘giving back’ as they say, although I prefer the word ‘sharing.’ Because ‘giving back’ is sort of the politically correct expression. It kind of implies that you don’t really deserve it, so you have to give it back. … If it’s mine, I don’t give back, I share because then it comes with joy,” he said.

This Is New York is a regular feature that delves into the life of an inspiring individual in New York City. See all our TINYs here epochtim.es/TINY