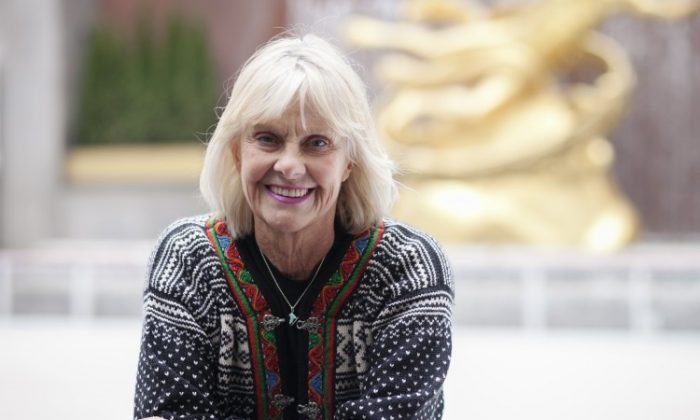 This Is New York: Rikki Samuels, The Ice Queen of Rockefeller Center

NEW YORK—It was an ordinary day at the rink at Rockefeller Center in 1993. The employees shooed off the hordes of skaters during ice resurfacing time, and Rikki Samuels glided to the center of the rink to get married. She was given away, said “I do,” the bulky ice resurfacer machine came around, and the wedding was over.

“It’s just the way I wanted it to be,” Samuels recalled, now 74. Samuels was a lead skater in the traveling ice show, Ice Follies, and a four-time U.S. Figure Skating Association national competitor. In the 1960 Winter Olympic tryouts, only two female skaters could do a double axel—Samuels and the eventual women’s figure skating gold medalist.

Skating had always been the centerpiece of Samuels’s life, and a wedding would have been incomplete without it.

Samuels knew by age 8 that she wanted to be a professional figure skater. Despite pressure from her father that skating should be a hobby rather than a career, she ardently pursued her dream. Looking back on her life now, Samuels feels that all young people should be allowed to pursue their interests, even if their career choices are unconventional.

“Boy, I wish [my parents] could see me today, see what they gave me,” Samuels said. “I really wanted to skate, and they listened. Skating is important to me, and this proves it today.”

Samuels is dubbed by locals as the “Ice Queen of Rockefeller Center.” She has been teaching there for 29 years, and at age 74, the word retirement is still not a part of her vocabulary. She can still pull off an “arabesque spin,” a spin with one leg extended horizontally.

She doesn’t need the money, but continues to teach skating because it fills her life with vigor. The secret to growing old contently and with grace is to keep oneself in a positive environment. Most of Samuel’s current students are adults in their 40s, who are reaching a stage of life where they can find time to pursue something they have always wanted to learn.

“They give me a lot of life,” Samuels said. “They don’t talk about ailments, retirement, or negative things.”

She has less than 20 students, and many have been coming to her for at least 10 years.

“I’ve never had a non-skater come and not develop into a comfortable skater,” Samuels said. “You see them trying so hard, if they’re not learning, then its the teacher’s fault. I have to think of new ways to explain things to them.”

She has had many younger students who have gone on to compete in nationals, but her pride lies with the adult students, who she calls “old-fashioned children” that often hug and kiss her whenever they master a trick on ice.

At age 5, Samuels moved from New York to Montreal, where ice skating was the norm. It was in Canada that she first began taking skating lessons.

After five months, her class held an ice skating performance. She recalled the bitter disappointment of not being picked for lead roles.

She had already fallen in love with the sound of applause, praises from her instructor, and most importantly, the art of dance on ice.

“Dancers push into a beautiful position for seconds, while skaters hold that position for over 100 feet as you cover the ice,” she said.

Samuels’s father was a sports fanatic, believing in its power to teach children discipline and respect. Her sister swam, her brother skied, and Samuels ice skated. But he never envisioned sports as a decent career for Samuels.

At age 13, Samuels stopped attending public school for a large part of the school year to train. Her father allowed her to do so on two conditions: Samuels had to keep her grades up and get into college. She did both, but getting into college was as far as she went.

Samuels attended the University of Pennsylvania for one month before signing a contract to perform with the Ice Follies in 1959. A year later, she became a lead soloist. To her father’s dismay, she never went back to school.

Perhaps the closest she has gotten to academia was marrying her late husband, Dale Hiestand, who was an economics professor at Columbia University.

“He was scholarly, but not very athletic,” she admitted. Hiestand had to learn how to skate for his own wedding.

“I just happened to work there and be friends with the rink director,” she whispered.