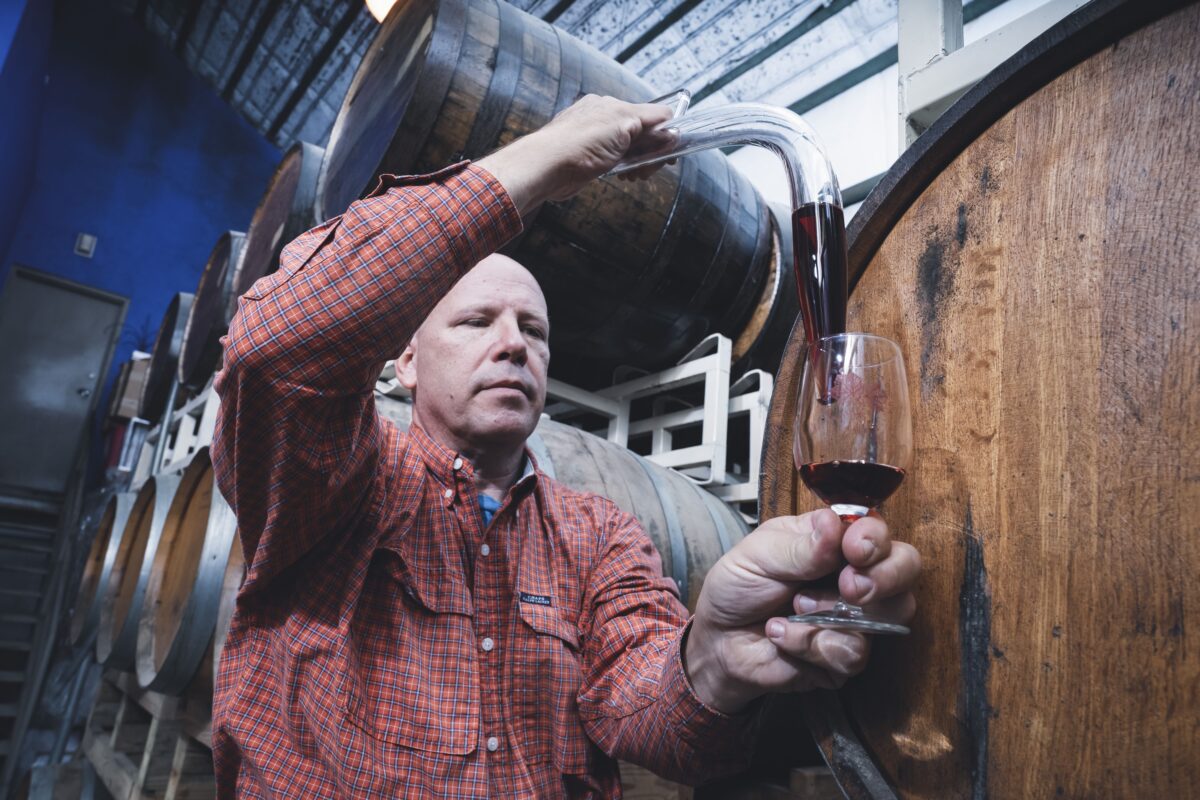 The rhythmic lap of aquamarine waves. A small army of bare feet crunching through white sand. The omnipresent fragrance of coconut-scented tanning oil wafting under a scorching sun. There’s no doubt about it. This is definitely beach territory.

Truth be told, this scenario could be found on almost any beach on Florida’s Gulf Coast. Only this particular area, known as SoWal or South Walton County, is different, and it’s not just because it’s home to some of the most lauded beaches in the United States, often finishing at or near the top of yearly “Best Beaches” lists.

One short drive north of these sunny beaches will bring you to the quaint southern town of Defuniak Springs. It’s here, tucked away near Interstate 10, that you’ll find Chautauqua Vineyards & Winery, a fully operational facility complete with sprawling vineyards, often touted as the largest in the state.

Never mind that in neighboring beach communities—true to their Southern roots—beer is arguably the drink of choice. Icy margaritas are pretty popular, too, as are slushy Piña Coladas, Bushwhackers, and other touristy drinks, with or without tiny umbrellas.

Yet for more than three decades, Chautauqua Vineyards & Winery has flourished and expanded. To keep up with ever-growing demand, the winery’s already sprawling vineyards have increased from 40 to 50 acres. Because many of its repeat customers are tourists and second homeowners who aim to get as much beach time as possible, a second retail location, Emerald Coast Wine Cellars, was opened near Miramar Beach. Meanwhile, the original, fully operational winery remains open to the public seven days a week, only closing for major holidays. Business here has remained decidedly robust.

Yet if you live somewhere outside the most southeastern portion of the United States, chances are you’ve never heard of Florida’s Chautauqua Vineyards & Winery. After all, its wines aren’t a familiar sight on fine dining menus in New York or Los Angeles. Nor will you find them on the shelves of national grocery chains. Still, over the years, Chautauqua has managed to consistently grow a die-hard fan base just the same.

“We’re blessed with a loyal customer base,” said Chautauqua winemaker George Cowie, humbly explaining the winery’s ongoing popularity with both locals and tourists, “so we strive to give them a good product.” And when the “good product” is wine, he said, it all begins with a good grape.

Cowie’s search for good grapes began in Paris, which may seem completely logical. Where else to learn about good wine than one of the world’s largest producers of it, right? Only, this Paris isn’t in France. It’s in Arkansas.

It seems Arkansas not only produced at least one former president and the nation’s largest retailer but good wine as well. And lots of it. In fact, according to Cowie, Paris’ wine production roots go all the way back to the 19th century. With such high regard for wine, it’s little wonder that the University of Arkansas offered courses on grape growing—courses that George Cowie enthusiastically completed, eventually earning a master’s degree in food science and enology.

Long story short, this education went a long way when Cowie initially began his wine-making career with Chautauqua owners Paul and Kate Owens. Back then, determining which type of grape was suited to Florida’s sandy soil and sometimes extreme weather conditions was top of mind. They ended up going with the red and white muscadines, Noble and Carlos.

“These are native grapes. They grow here,” explained Cowie, who’s been Chautauqua’s winemaker for 31 of the 32 years since its inception. “You can’t grow non-native grapes here,” he stressed. “That means no European varieties,” he said, before pointing out the absolute futility of even attempting to “fight Mother Nature.”

So far, this philosophy has proven successful, and the grapes hardy. This is no small feat considering that the area earned its nickname, “Hurricane Alley,” thanks to the number of named storms that regularly visit. Moreover, summer days bring intense heat and, occasionally, drought, while winter nights can be downright cold. Believe it or not, freeze warnings in December or January are not uncommon in this part of Florida.

Couple the schizophrenic climate with a nearly constant summer sun—it is the Sunshine State, after all—that seems hot enough to singe, or at least wither, a delicate grape, and you may wonder why in the world anyone would even think of opening a winery here.

Incredibly, the vineyards have survived it all. “Sure, we’ve had impact from weather,” acknowledged Cowie, surveying the past 30-plus years. “But we’ve never been wiped out.”

As good as the grapes are, there’s something more that keeps Chautauqua’s customers coming back time and time again. The winery has a super-friendly vibe, much like a family-owned, Southern diner. Newcomers and regulars alike are warmly welcomed, whether they’re making a quick stop for a couple of bottles of dinner wine or enjoying a more leisurely visit that includes one of the daily tours, complete with wine tastings.

Though the tours and tastings are offered free of charge, they’re very much a part of the winery’s recipe for success. It seems few tourers leave empty-handed as most of the house selections are priced at around $10 a bottle, with a select few going for about $26.

Offerings include classics like Chardonnay and Merlot as well as more exquisite wines such as Wild Honeyflower, Blueberry, Chocolate Port, Vanilla Sherry, and perhaps most fittingly of all, Beachberry. They also offer a rotating selection of seasonal varieties such as Sangria, Winterberry, and Strawberry Blond, a strawberry-tinged muscadine.

Though not organic, Cowie explained that a minimalist approach is taken when it comes to pesticides and preservatives used on the growing grapes as well as in the finished products. Cowie noted, “All wine has sulfites, but we keep them at about one-third the legal limit.” He went on to say that potassium sorbate, a common wine preservative, isn’t used at all.

“There are a lot of wineries who don’t have control from the grape to the bottle like we do. We grow our own grapes and we think that shows in the final product,” Cowie said, summing up the winery’s recipe for success. “These are native grapes, they grow right here. And we think this is something the people here can be proud of.”