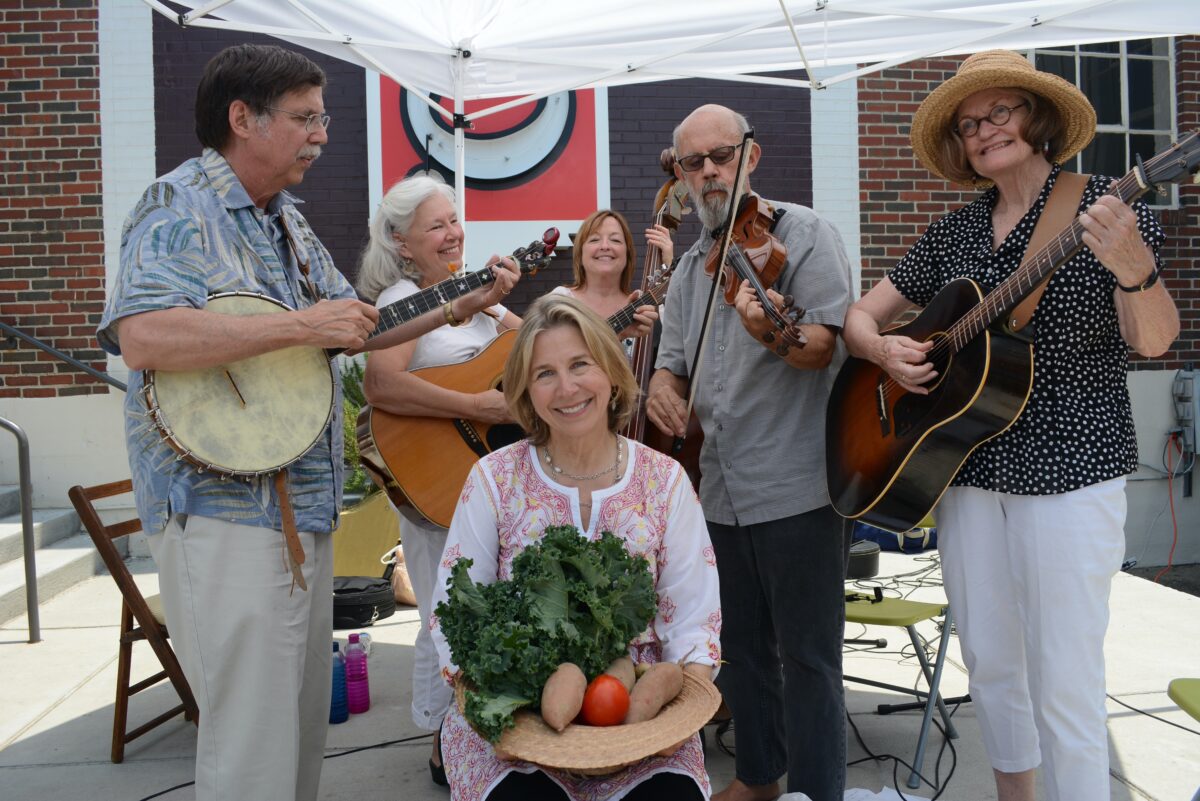 For 30 years, Birmingham residents and local chefs have shopped at the market for their kitchen ingredients. (Karim Shamsi-Basha for American Essence）
American Essence

Early on a Saturday fall morning in the Southside neighborhood of Birmingham, Alabama, within the parking lot of an old Dr. Pepper bottling plant, farmers began to set up their stands. They would soon be selling fruit, vegetables, herbs, flowers, and a plethora of locally grown harvest. If you had walked among the farm stands, you would have almost smelled the fresh earth nourishing the crops, seen the colors emanating from nature’s bounty, and heard the tractors tilling the rich meadows.

Growing up in a rural area near Birmingham, Cathy Crenshaw developed an early love for this land and the wilderness all around her. She played in tiny creeks and caught minnows and got muddy feet—which influenced her to embrace concepts like sustainability, conservation, and connectedness. Later in life, she searched for locally grown food and embraced small family farms. She adored working in the urban city and worked to promote the downtown area. But when suburban sprawl, which started in the 1960s, led to the decline of the city center and replaced family farms with huge supermarkets, she decided to take action.

“I couldn’t just sit there allowing huge corporations to kill those family farms. I had to do something, so in 2000, I started Pepper Place Farmers Market, named after the Dr. Pepper bottling plant nearby. We had seven stands and a few chefs who supported the market early on,” Crenshaw said. “That was the key to us growing.”

Local chefs like Frank Stitt and Franklin Biggs were early supporters of the farmers market, and many others followed. The chefs needed the basics, from cucumbers and tomatoes to corn and peaches. They also wanted asparagus, different varieties of mushrooms, several types and colors of beets, and even sunflowers. The Pepper Place Farmers Market grew in size and offerings.

Thirty years later, Crenshaw is humbled and proud when she walks through the market, greeting friends and the farmers she has known for decades. She adores the fresh aroma of the vegetables, fruits, herbs, and flowers, and she cherishes the place where everyone can commune with one another about life’s basics.

“It brings tears to my eyes when I see four generations from the same family of farmers that had started the market. Now, their children and grandchildren are running the stands. We grew from seven stands to over a hundred. On a recent Saturday, we had nearly 10,000 visitors. It’s truly very humbling,” Crenshaw said.

Crenshaw’s sister, Leigh Sloss-Cora, is executive director of the Pepper Place Farmers Market. She lived and worked in New England for 20 years, then decided to come home to Birmingham. Sloss-Cora oversees the market operations and fundraising.

“Leading the market has been so rewarding, and getting to know the farmers who work so hard is truly inspiring,” Sloss-Cora said. “We should celebrate our farmers, artisans, and food producers. They are true heroes who make this market a wonderful place.”

Sloss-Cora is proud of what the farmers produce and the way everyone works together to make Pepper Place Farmers Market one of the coolest events happening in Birmingham on Saturday mornings.

“The market keeps me connected to investing my energy in my community. It’s a real privilege. For us to have a truly livable city, we must have a thriving and diverse farmers market. It’s the perfect place for people to share and connect,” Sloss-Cora said.

Their goal of protecting the small family farm has endured, and the sisters have seen the market become more important for residents. Crenshaw added, “My heart smiles when I realize this market is the sole provider of fruit and vegetables for so many families. But you know what? I believe the market offers much more than that. It offers connectedness.”

According to Crenshaw, the connection between the people and the land is most important. This connectedness contributes to building community. “Everyone wants community where they live, where they shop, and where they play. People want to feed their souls—and community does exactly that. It feeds your soul,” Crenshaw said. “There is something even bigger than that. I truly believe this market and others like it help with land conservation.”

For Crenshaw, protecting small family farms contributes to keeping the land green, which ultimately helps with land conservation. As family farms mature and thrive, so do other organic principles like growing a harvest free of pesticides and chemicals that harm the land. “We don’t treat this lovely earth the way we should, and family farms are one of many things that should help. If we take care of the earth, we can endure as humans.” Then, with a slight grin, she added, “I absolutely love Birmingham—my city—and I feel that I need to help it endure.”

Cathy went on to explain that Birmingham, in addition to its rich history and culture, has become a food and travel destination. She senses much hope in the future, but it all starts with small steps like supporting these family farms.

A few hours later, after the farmers had taken down their stands, emptied of the harvest they brought, the Dr. Pepper bottling plant parking lot was back to being empty. But the smell of the fresh earth, the colors of nature’s harvest, and those sounds of tractors tilling the earth still resonated within home kitchens all over the city.