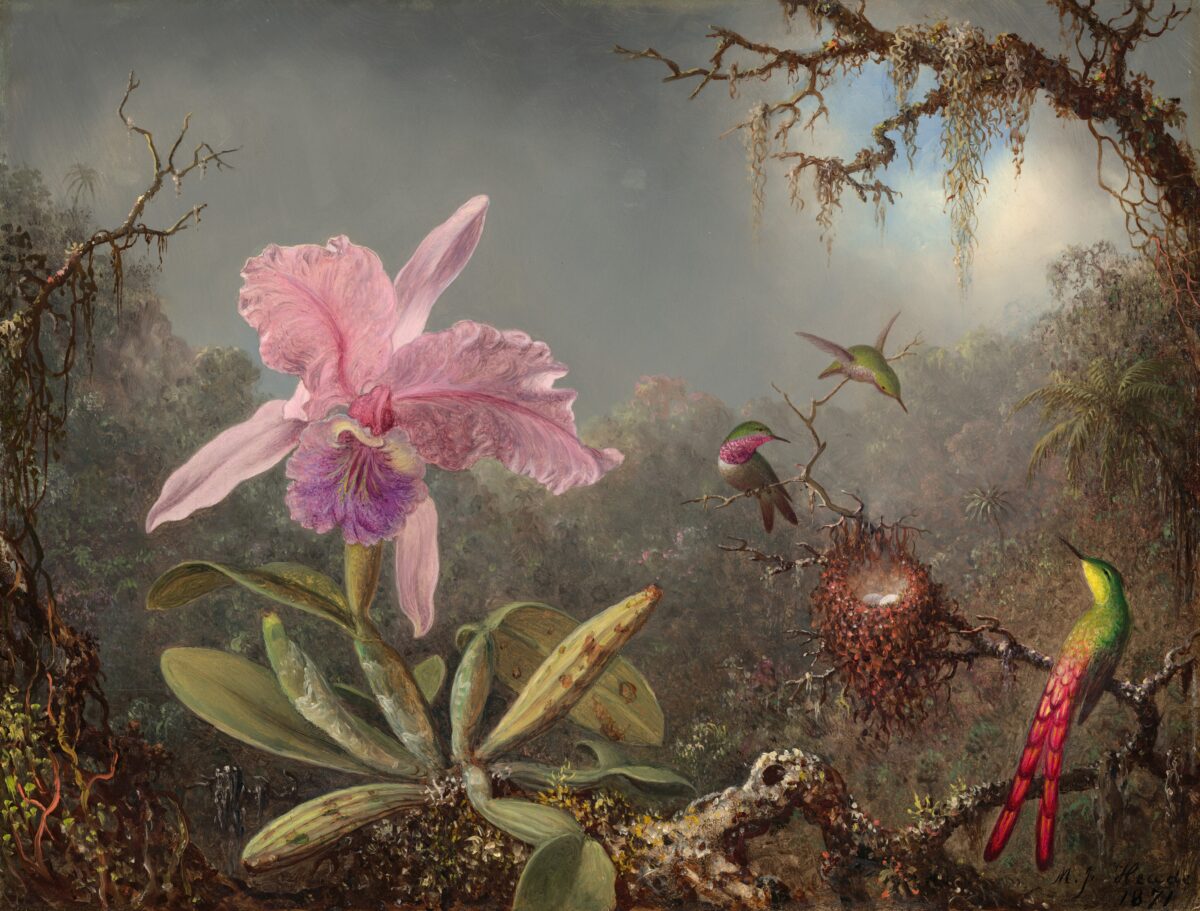 Hummingbirds as muse in the works of Martin Johnson Heade
BY Jeff Perkin TIMEApril 17, 2022 PRINT

“I always loved those little creatures, always feeling blessed when they appeared nearby. There’s a magical quality to them.”—American musician Leonard Cohen

Hummingbirds are a source of endless fascination for human beings throughout the Americas. With their gracefully rapid movements and shining spectrum of colors, hummingbirds are one of life’s intrinsic pleasures to behold. Like fairies of the ornithological world, they embody a certain innocence or ethereal essence in their small, fragile forms as they flit from flower to flower, on imperceptible wings, repeatedly plunging their very long, thin beaks into the nectars of life. These unique and appealing features of their being have long made them the subject of artistic adoration and commerce, transcending borders and uniting enthusiasts of art and garden decoration alike.

19th-century American artist Martin Johnson Heade was a proud hummingbird adorer of the highest degree. In his own words, Heade admitted, “From early boyhood, I have been almost a monomaniac on hummingbirds. … A few years after my appearance in this breathing world, I was attacked by the all-absorbing hummingbird craze and it has never left me since.” This obsession stayed with him until the end of his life and led him from the eastern United States all the way to the jungles of Brazil in pursuit of these tiny subjects. While not the first to depict hummingbirds in paintings, he was the first American artist to make this pilgrimage to study and paint the hummingbirds of South America from observation.

Born in Lumberville, Pennsylvania, in 1819, Heade was trained by painter Edward Hicks and made his professional debut at the age of 22 when his painting, “Portrait of a Little Girl,” was exhibited at the Pennsylvania Academy of the Fine Arts. The painting’s current location is unknown, and, before long, portraits in general were lost upon his interest. Landscape painting became a suitable match to Heade’s proclivity for moving and changing scenery. In this new artistic chapter, he began to specialize in paintings of salt marshes and seascapes. His works were recognized particularly in their mastery of atmosphere, light, and changing weather conditions.

In 1863, Heade set out to fulfill the passions of his inner child by focusing his landscape abilities on South America and, particularly, on paradisal paintings of hummingbirds. Heade was pointed toward Brazil by American Reverend James Fletcher, missionary and author of a Brazilian guidebook, who assured him, “Everywhere throughout Brazil this little winged gem, in many varieties, abounds, while in North America, from Mexico to the fifty-seventh degree of latitude, it is said that there is but one species of hummingbird.” Fletcher was incorrect about this last fact (there are over a dozen), but was correct in his general sentiment since, by comparison, there are over 350 species of hummingbirds that live in Central and South America.

The daring decision to journey abroad paid off immensely for Heade’s level of inspiration and productivity. On the first of three trips he made to Brazil, Heade produced an incredible 45 paintings, including a series known as “The Gems of Brazil.” He used vibrant colors to showcase the birds’ “jewel-like” feathers, about which French writer J. Hector St. John de Crevecoeur hyperbolically remarked, “The richest pallet of the most luxuriant painter could never invent anything to be compared to the variegated tints with which this insect-bird is arrayed.” The exotically abundant jungles of South America understandably captured the imagination of the Western world, to the extent that theories began to be popularized that Eden existed somewhere in the kaleidoscopic rain forests of the south.

Heade aspired to be a bold adventurer, braving the wild of the rain forest to study these birds and to be regarded amongst their foremost experts. Art historian Robert G. McIntyre honored him greatly when he reported, “As a painter of hummingbirds, Heade received the high praise of Agassiz; and now in our day he has been pronounced by Mr. Ludlow Griscom, of the Museum of Comparative Zoology at Harvard University, better, in some respects, than the great Audubon. This comparison is significant, for, if the hummingbirds of Heade are to be classed with the accomplishments of Audubon, they alone entitle him to an eminent place in the history of American art, even had he painted nothing else.” To be compared with Audubon was a pinnacle of success since Audubon’s greatest work, “The Birds of America,” was an artistic achievement pivotal to ornithology.

In subsequent years, Heade began incorporating another exotic and popular group of subjects into his paintings—orchids. Without failing to please, his paintings continued to specialize in beautifully depicting hummingbirds alongside orchids, set against lush backdrops. Toward the end of his life, he lived in Saint Augustine, Florida, and began to paint landscapes of the marsh and swampland. It was there that he died on September 4, 1904. Though his works had fallen out of popular attention at the time of his death, his dedication to carefully documenting the details and peculiarities of hummingbirds has earned him a respected place in art history forever. Art historian Robert G. McIntyre further espoused this sentiment when he wrote:

“Heade stands aloof from his fellows, an isolated phenomenon in the ebb and flow of his time, sharing with none but nature his deepest thoughts. He dedicated his whole being to nature: she was his thesis, in the writing of which, though he sometimes faltered, he never ceased to persevere. She was also his swan song, for he painted almost as he died.”