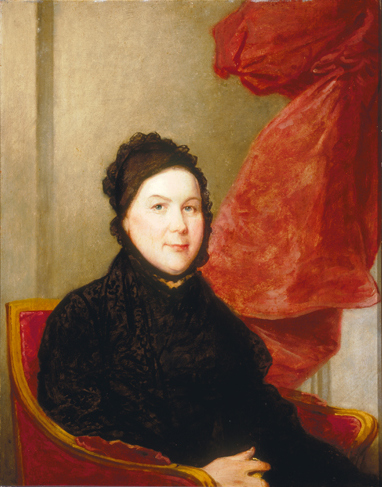 Catharine Greene, wife of a general in the American Revolution, was instrumental in maintaining troop morale, and played a key role in the development of the cotton gin
BY Sydney Slack TIMEApril 29, 2022 PRINT

Catharine Littlefield, born in 1755 in what was then the British colony of Rhode Island, would grow up to become a dedicated wife and supporter of those around her, as well as a woman who could take action on her own when needed. Her mother died early during her childhood, and she was sent to live with her aunt and uncle, Catharine Ray (her namesake) and William Greene. It was while living with them that she met and fell in love with a frequent visitor, Nathanael Greene. The two wed in 1774, despite a 12-year age gap.

Nathanael Greene was already heavily involved in colonial politics and the military while courting Catharine. In 1774, he helped to form Rhode Island’s militia unit, the “Army of Observation,” which would later be absorbed into the Continental Army. He was appointed a major general at age 34.

Nathanael proved his loyalty and skill at the battles of Trenton in New Jersey and Brandywine in Pennsylvania, earning the respect of George Washington. In 1778, he was promoted to quartermaster general due to his administrative abilities. Two years later, Nathanael left that position to lead a small army into the South, where his strategic thinking and guerilla tactics led to victory over much larger British forces.

Within a year of their marriage, 20-year-old Catharine’s wishes to be a regular 18th-century homemaker were interrupted by the outbreak of the Revolutionary War. Nathanael left to command troops in May 1775. After more than a year apart, Catharine refused to be separated from her husband any longer and joined Nathanael at his camp in late 1776. She would follow him throughout the war, only leaving him when pregnancy or the duties of motherhood required her to do so. Her insistence to be by his side earned her many criticisms from friends and family. That simply wasn’t done.

It was during the years of the Revolution that Catharine and Nathanael had their six children: George, Martha, Cornelia, Nathanael, Louisa, and Catharine. The first two were named in honor of Gen. George Washington and his wife Martha. All but one of the Greene’s children lived to adulthood; baby Catharine, their last child, died as an infant.

Catharine became best known for her ability to cheer up the troops during her visits to her husband. A lively young woman, she delighted in planning social events, such as dances, for the soldiers to improve morale. She also served as an unofficial translator between American and French ally military officials, volunteered her home as a military hospital, and visited the families of deceased soldiers to tell them the devastating news. She and other military wives, like Martha Washington, were important supporters of the militia—so much so that, in 2001, the Association of Quartermasters created the Catharine Greene Award to recognize the support and contributions provided by spouses of the Quartermaster Corps.

After the Revolution, Catharine finally thought she’d have the quiet life she first imagined. The Greene family moved to Mulberry Grove, a plantation near Savannah, Georgia, that had been taken from a Loyalist lieutenant governor and gifted to Nathanael as compensation for his military service. Their Quaker beliefs did not allow them to own slaves, which made it difficult to make Mulberry Grove successful, but they hoped all the same to profit from rice planting like previous owners of the plantation.

Nathanael had gone into debt during the war trying to clothe and feed his soldiers, making it essential that they make the land profitable quickly. Unfortunately, he died suddenly in 1786, leaving Catharine with five children, a plantation to run, and massive amounts of debt.

She hired Phineas Miller, the children’s former tutor, as plantation manager. By giving in to the use of slave labor, they were able to make Mulberry Grove profitable within a few years. By 1791, Mulberry Grove was doing well enough to host George Washington on his presidential tour.

Catharine also took it upon herself to petition the newly formed U.S. Congress to forgive her husband’s war debts. In 1792, George Washington signed the papers that freed her from that burden and provided Catharine with great relief.

But Catharine’s story does not end there.

Eli Whitney and the Cotton Gin

There are many different stories about how she met Yale graduate Eli Whitney. He may have been a neighbor’s tutor, or a traveling companion, or perhaps just a house guest. No matter how they were introduced to each other, their meeting resulted in one of the greatest agricultural inventions of all time.

During an encounter with Whitney, she mentioned to him the difficulties of separating upland, or short staple, cotton from its seeds. He had heard similar complaints from neighboring planters who came to visit while he was staying at Mulberry Grove. The comment inspired Whitney to create a machine that could do this task more quickly and efficiently than could be accomplished by hand.

Catharine provided Whitney with the financial backing and the workspace he needed to tinker and invent what would become the cotton gin (short for “engine”) in 1793. The simple machine consisted of two rotating wooden cylinders set with wire teeth to comb the cotton. Catharine financed his 1794 patent application and all the lawsuits that followed, going into debt to do so. Her support of Whitney revolutionized American agriculture and led to cotton becoming a major cash crop for decades to come.

The cotton gin was invented at the right time and in the right place to revolutionize the Southern economy and cement the existing slave culture. During the 1790s, tobacco, once the South’s chief export, was no longer the cash crop. Over-supply of tobacco meant low prices, and since tobacco plants quickly exhausted soil nutrients, it became harder to grow.

As the cotton gin was introduced to the South, cotton replaced tobacco as the most profitable crop. The raw cotton yield grew exponentially through the 19th century, making the American South the world’s largest supplier of cotton. Most of the cotton was shipped to England and New England, where textile manufacturing thrived. Cotton allowed the United States to enter into the world market and set the stage for America to become a world power in the decades to come.

However, as cotton plantations grew, so did the amount of enslaved labor needed to grow and pick the profitable plants.

From 1790 to 1808, when the slave trade from Africa was banned, more than 80,000 Africans were imported into the South to provide slave labor. By the mid-19th century, about one in three Southerners was a slave. The price of slaves skyrocketed during this economic boom. Slavery would go on to define the South and its culture for much of the next century.

Land was also needed to expand the plantations and grow more cotton. Plantations took up the majority of Southern land, inhibiting the growth of cities and industrial centers. This would lead to a great cultural divide between the agricultural South and industrial North, creating tension between these two halves of the nation. Additionally, the profitability of cotton led to westward expansion as people searched for new land on which to grow it when older plantations succumbed to soil exhaustion. As the country expanded, new states were added, and the political tension over whether the states should allow slavery or not was one of the biggest contributors to the start of the Civil War.

In the end, Catharine had to sell Mulberry Grove to pay off her debts, and she moved her family to Cumberland Island in Georgia. She married Phineas Miller in 1796 and died in 1814 at the age of 59. During her lifetime, Catharine provided much support to those around her, including her husband, his soldiers, and Eli Whitney, but she also looked after herself in the face of adversity.

A previous version of this article contained an incorrect date of birth for Catharine Littlefield Greene. She was born in 1755. American Essence regrets the error.