‘They Move Like Water,’ Says Artist About Shen Yun Dancers 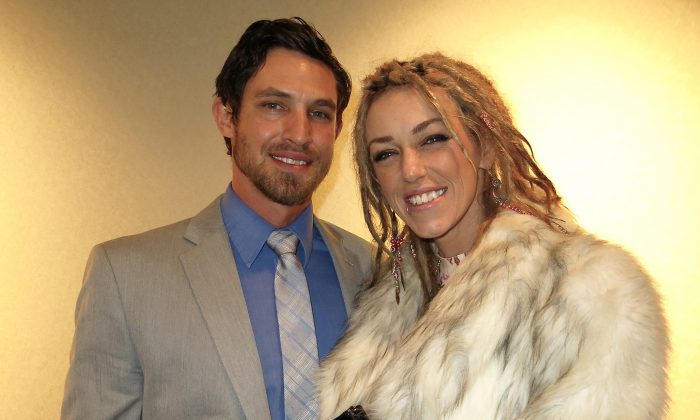 GRAND RAPIDS—”Their technique is flawless. It is wonderful to watch. They move like water. So I love it,” said Leyna Luttrull after seeing Shen Yun Performing Arts Touring Company with her husband, Chris Luttrull.

For several years now, Ms. Luttrull has wanted to see Shen Yun and her wish came true. As a Christmas gift her husband got tickets for the Dec. 30 performance at the DeVos Performance Hall.

“It is so awesome,” said Ms. Luttrull at intermission. “I am just so excited, the whole time—it is beautiful.”

Mr. Luttrull is in automotive sales and his wife is a stay-at-home mother of four daughters, with a new born. She also paints. They found the performance to be impressive, visually beautiful, as well as eye opening.

“It is a work of art to watch how they all move together, coordinate, and the timing,” said Ms. Luttrull. She was referring to the story-telling classical Chinese dance which is the hallmark of Shen Yun.

Classical Chinese dance is not well known in the United States. “Yet, it is thousands of years old and the base for modern-day gymnastics and acrobats,” states the company website. “It is a distinct dance system with expressive movements and postures, which are perfect for storytelling.”

“It was visually stunning and very interesting,” said Mr. Luttrull. “It is also incredibly thought-provoking, and a lot of information coming in. It is something you wouldn’t know about had you not come to the performance,” he said.

This year Shen Yun celebrates its 10-year anniversary of bringing audiences the authentic, divinely inspired Chinese culture through dance and music. This culture was almost completely lost due to the Chinese Communist Party’s policies to destroy traditions in the arts and spirituality in general.

Amidst the beauty and wisdom of the ancient culture, there is also a modern-day story unfolding in China, which Shen Yun is depicting on stage. “It is beautiful and it is tragic also because I didn’t realize that you couldn’t meditate there. I meditate, and I know it is a traditional Chinese practice,” said Ms. Luttrull. However, she was unaware that a traditional meditation practice was oppressed today in China.

Falun Gong, a spiritual discipline which includes meditation, has been banned in China since 1999.

Ms. Luttrull would recommend Shen Yun to everyone due to its visual beauty and educational nature. “I love bringing awareness to issues. So, I love this. It is great. It is very informative,” she said.