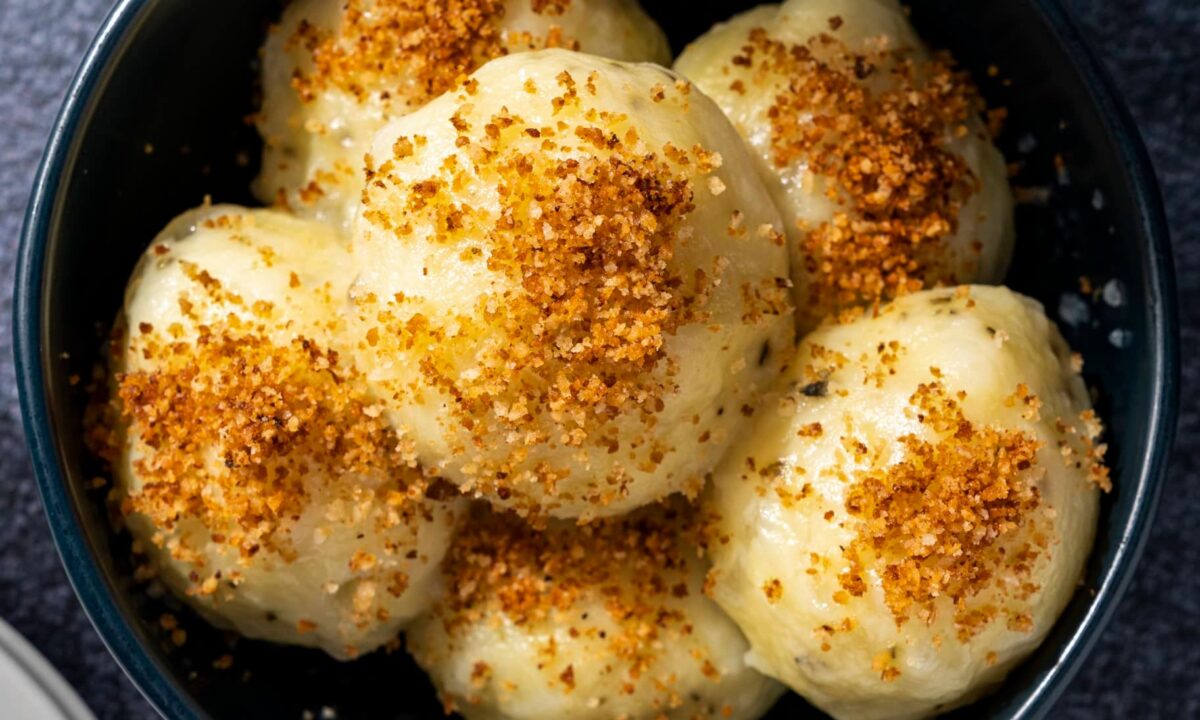 These Potato Dumplings Are a Comforting Alternative to Mashed Potatoes

There are some who swear that a pinch of ground nutmeg is the best seasoning, while others think that dried marjoram is the way to go. Personally, I prefer the savory flavor from dried marjoram, as well as some finely chopped (or grated) onion and celery for added flavor and interest.

For additional texture, these dumplings can either be filled with a toasted bread crouton in the center or topped with toasted breadcrumbs just before serving. Both are delicious options to try, but this recipe calls for the latter.

Gnocchi are small dumplings found in Italian cuisine. They’re frequently rolled on a textured board or with a fork to make small indentations along the dumplings. When served with a sauce, these indentations capture some of the sauce in each bite.

German-style potato dumplings are also made primarily with potatoes, but they’re quite a bit larger. They’re seasoned with marjoram or nutmeg and topped with toasted breadcrumbs before serving.

What Are Potato Dumplings Made Of?

Potato dumplings are made with riced potatoes, potato starch, and eggs for binding. They’re often topped with toasted breadcrumbs or stuffed with a toasted bread crouton.

Potato dumplings are a wonderful side dish to accompany other traditional German meals, such as sauerbraten. If you’re looking for a vegetable side dish to add to the meal, German red cabbage is always a wonderful option.

Peel the russet potatoes. Place them in a large pot or Dutch oven and add enough water to cover. Bring to a boil over high heat. Reduce the heat as needed and simmer until tender when pierced with a fork, 20 to 30 minutes. Drain and let the potatoes cool to room temperature. Refrigerate for at least 1 hour and up to overnight (chilled potatoes are easier to rice).

Bring a large pot or Dutch oven of salted water to a boil. Meanwhile, make the dumpling dough and form the dumplings.

Pass the potatoes through a potato ricer or grate on the small holes of a box grater until you have 4 cups. Add the potatoes, 1 cup of the potato starch, the kosher salt, and the dried marjoram to the bowl, and stir until just combined.

Divide the mixture into 12 portions and shape each into a round dumpling. Place the remaining 2 tablespoons of potato starch in a small bowl. Roll each dumpling in the potato starch until coated, then place on a plate or baking sheet.

When the water is boiling, gently place the dumplings in the boiling water with a slotted spoon. When the dumplings float to the top, about 5 minutes, reduce the heat to maintain a simmer. Cover and simmer until the dumplings have puffed up a bit and have a shiny surface, about 20 minutes.

Meanwhile, melt the butter in a medium skillet over medium-high heat. Add the plain breadcrumbs and stir to coat. Cook, stirring often until the breadcrumbs are browned, 4 to 8 minutes. Remove the skillet from the heat.

Transfer cooked dumplings with the slotted spoon to a bowl or a serving platter. Top with the toasted breadcrumbs and serve warm.

Refrigerate leftover potato dumplings, covered, for up to four days. To reheat, cook in simmering water until heated through.

Mix and shape the dumplings as directed, then arrange them on a rimmed baking sheet so they aren’t touching and freeze until solid. Transfer the dumplings to zip-top bags and freeze for up to three months. When ready to eat, cook them in boiling water until they float, then cover, reduce the heat to low, and simmer for 20 minutes or until cooked through.

Kristina Vänni
Follow
Kristina Vänni is a contributor to TheKitchn.com, a nationally known blog for people who love food and home cooking. Submit any comments or questions to editorial@thekitchn.com. Copyright 2021 Apartment Therapy. Distributed by Tribune Content Agency, LLC.
SHARE
Friends Read FreeCopyFacebookTweet
You May Also Like