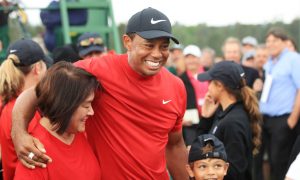 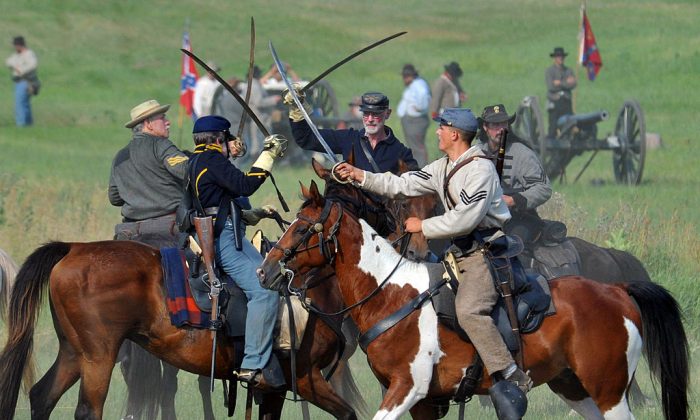 Union cavalry troops engage Confederate cavalry with sabers during the Battle at the Sherfy House on July 2, 2011 during re-enactments of battles at the Gettysburg National Military Park in Pennsylvania. (KAREN BLEIER/AFP/Getty Images)
History

These Honored Dead: Paying Homage to Our Past

Most Americans have at least a passing familiarity with the Battle of Gettysburg, that terrible trilogy of days from July 1 to July 3, 1863, that left 6,000 Americans—Northerners and Southerners—dead on the field of battle.

Later that year, President Abraham Lincoln delivered his “Dedicatory Remarks” at the consecration ceremony for the Soldiers’ National Cemetery in Gettysburg, Pennsylvania, a resting place for many of the Union dead. The president’s brief remarks, known to us as Lincoln’s Gettysburg Address, is considered the finest speech in U.S. history and is one more reason why we remember this battle.

Many historians regard Gettysburg as the turning point in the Civil War, calling it “the high-tide of the Confederacy.” Gen. Robert E. Lee returned to Virginia having lost one third of his Army of Northern Virginia, and though Gen. George Meade failed to pursue Lee’s men—many of his soldiers were exhausted, and Meade himself, appointed to his post just before the battle, had lost several of his commanders to death and wounds—Gettysburg marked the final attempt by the South to bring the war to its Northern neighbors.

Often overlooked or forgotten is what occurred on July 4 of that same year.

While the two forces at Gettysburg spent the Fourth of July in relative peace, staring at each other across blood-soaked fields and woodlands, Gen. Ulysses S. Grant’s army captured the fortified town of Vicksburg, Mississippi. After enduring a siege of more than 40 days, Confederate Gen. John Pemberton surrendered his army of almost 30,000 men to Grant.

The fall of Vicksburg and the Union victory brought consequences of great magnitude. The first was strategic. The surrender of Vicksburg, followed a few days later by the capture of Port Huron by Union Gen. Nathaniel Banks, gave the North command of the Mississippi River and split the South in two, cutting off the states of Louisiana, Arkansas, and Texas from the Confederacy. The North could now supply its western army by use of America’s longest river, giving Union forces an enormous advantage in the months to come.

Just as importantly, Vicksburg boosted the reputation of Gen. Grant. In the three weeks preceding the siege, he conducted a brilliant campaign. His forces marched 180 miles, fought and won five battles, and captured close to 6,000 prisoners. With the Confederate surrender at Vicksburg—Lincoln wrote that the Mississippi “again goes unvexed to the sea”—Grant won the respect and fame that would soon catapult him to the post of general-in-chief of the Union armies, and from there into the presidency.

Grant was the general Lincoln had sought for more than two years: a fighter, a man who wasn’t skittish about taking on the much-feared Robert E. Lee, and a battle-toughened commander who knew that under his supervision were the men and the supplies that would deliver the destruction of the Confederacy.

Though he had won commendations in the war with Mexico, Grant had spent the seven years before the Civil War struggling to make a living as a civilian, having resigned from the Army after an incident involving drinking. Later, when some detractors went to the president and accused the general of downing too much whiskey, legend states that Lincoln replied, “Can you tell me where he gets his whiskey?” They asked the president why he wanted to know. “Because if I could find out,” Lincoln supposedly replied, “I would send a barrel of this wonderful whiskey to every general in the army.”

In Grant, Lincoln finally found the general who would win the war.

Summer is the time when many of us pack up our cars and take off on a vacation: the beach, the mountains, Disney World, the big city, or Grandpa’s farm in Iowa.

While making these trips, why not take a break from the interstate, hit the back roads, and absorb some history?

If you’re traveling near Gettysburg, visit that battlefield, slip among the rocks of Devil’s Den, and imagine the crack of musket balls against those boulders. Stand at the tree-line facing Cemetery Hill and stare across that wide field, and then imagine how those men in butternut-gray must have felt as they stepped out for Pickett’s Charge.

If your itinerary puts you near Vicksburg, stop at the national military park and try to envision yourself in one of those small caves dug by the city’s inhabitants trying to escape the Union bombardment. Visit Vicksburg’s USS Cairo Museum, where you can see the salvaged remains of one of our nation’s first ironclad warships.

Our country offers thousands of such chances to step back into the past. From Boston’s Old North Church to San Diego’s Presidio Park, from Montana’s Little Big Horn Battlefield to North Carolina’s Oconaluftee Indian Village, you’ll find pieces of Americana. Even here in the small town of Front Royal, Virginia, where I live, you can visit Confederate spy Belle Boyd’s house, the Warren Heritage Society, and the Virginia Beer Museum.

These trips also allow us the perfect opportunity to introduce our children and grandchildren to their American past, bringing to life what they have read in books or learned in a classroom. Many of the employees and volunteers at these sites are passionate about the past, and the fire of their enthusiasm may well light a flame in our young people, rousing a life-long interest in history.

When we pay a call on the past, when we walk through the streets of Colonial Williamsburg or stand in silence among the graves of Arlington National Cemetery, we remember and honor the men and women who helped build our country. We remember who we were, who we are, and who we can become. In recollecting the triumphs and travails of our ancestors, we are also ensuring, as Lincoln once said, “that government of the people, by the people, for the people, shall not perish from the earth.”