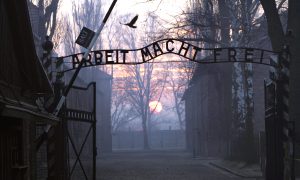 These Dolls Were Taken From Two Girls Destined for Auschwitz (Video)

In February of 1944, two young Jewish girls were removed from their school near Dijon, France and deported to Auschwitz.

While taking sisters Denise and Micheline Lévy, authorities grabbed the dolls the children carried and tossed them to the ground. A shop owner held onto the discarded toys, but the girls never returned from the concentration camp, reports The Telegraph.

The dolls had since been in the family of Frédérique Gilles, who recently decided the dolls deserved a more fitting home. On Sunday, they were donated to the Shoah Memorial in Paris.

Though she has children of her own, Gilles said, “It felt wrong to hold on to them…We wanted to give them to a museum or a place of memory. It wasn’t easy to give them up but it was the best thing we could do for the memory of those little girls.”