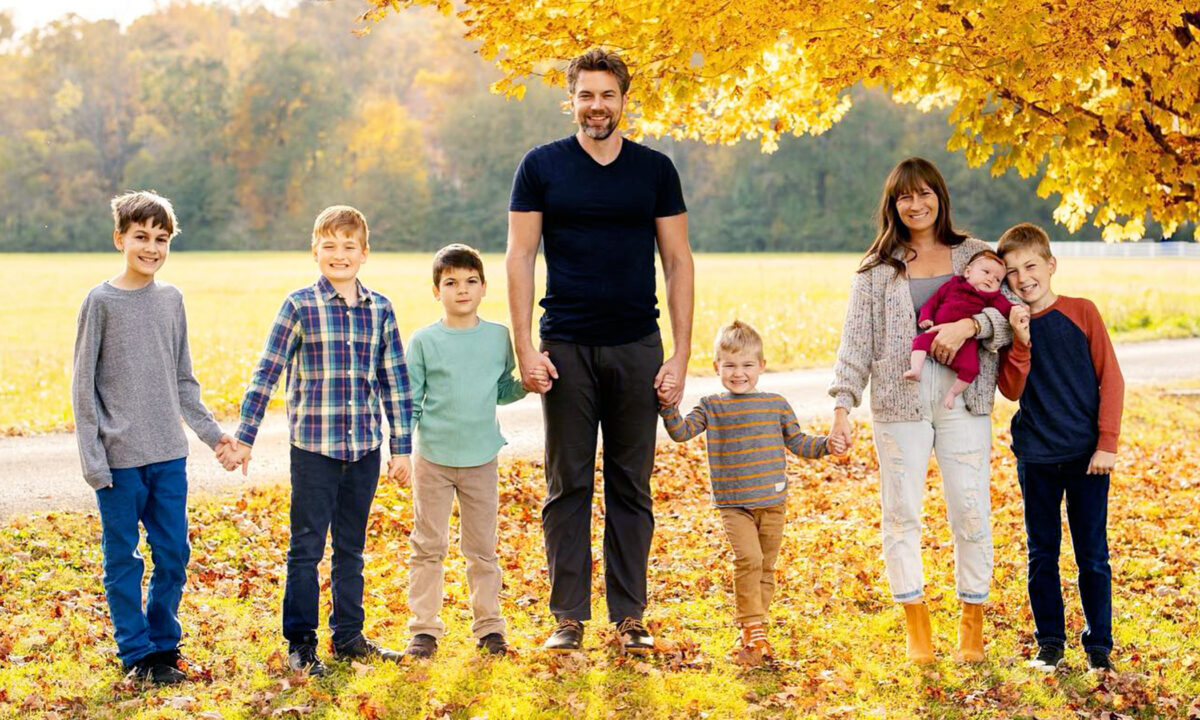 ‘There’s So Much Beauty Ahead’: Mom Gives Birth to a Daughter After 5 Boys and 3 Miscarriages

After giving birth to five boys and facing three miscarriages, a woman from Tennessee welcomed her sixth child—a baby girl—with relief and wonder. Now, looking back on her rocky road through the wilderness of childbirth and miscarriage, she wants women to know they can push through fear and move forward despite their own grief and loss, adding, “there’s so much beauty ahead.”

Pregnancy and Miscarriage—Life and Loss

Already a mother to four young boys, Allie Darr delivered her fifth baby with a broken heart. She was only 20 weeks into her pregnancy and there was no heartbeat. During that stage in the pregnancy, she had to undergo induced delivery, knowing full well that her son “Henry” would not breathe when he emerged. This was an absence felt by the whole family.

Darr had already experienced one miscarriage earlier in her life, seven weeks into her third pregnancy. However, the weight of that loss did not fall so heavily on the shoulders of her husband, Jordan, and two boys at that time, as it was just too early, so Darr had felt it alone.

However, the loss of Henry was felt far more profoundly by the family, as they had to learn that being pregnant didn’t mean that the baby was going to make it. During this phase, Darr’s husband stood beside her while she delivered the lifeless child, and then held him in his arms. This time, it wasn’t just the mother; the whole family grieved the loss of Henry’s presence together.

“He had a name, the kids knew he was coming,” Darr told The Epoch Times.

Darr’s greatest challenge in dealing with the miscarriage was trying to understand why she had to go through such sadness. She struggled with being angry at her body and at the world, at the feeling that her child was literally ripped from her grasp. She struggled at “making sense of it.” Then, without rhyme or reason to point at, she started looking for her “silver linings.”

“I tried to find the good through the bad that we were going through and started just looking for little moments each day, that would bring me a tiny bit of joy,” Darr said. “And, you know, remind me that life is still good, even though we’re living through hell.”

Darr and her husband also spoke about it and the family prayed together so as to cope with the loss.

After her experience with Henry, Darr was convinced that she was done having children. But to her surprise, she conceived again. Then began her battles against fear: she was terrified of losing another baby.

“I think the fear of what happened before is just in the forefront of your mind when you get pregnant again, and you’re waiting for the other shoe to drop and for it to happen again,” Darr said. “And so going through pregnancy after loss is very stressful.”

Yet, Darr forged ahead. She prayed often and exhorted herself forward with “self-talk”—propelling herself into each next step. She was cautious as she waited to hold the baby solidly in her arms. Only then, she felt, there would be peace.

This time, it was surely different. Darr gave birth to her fifth baby, Teddy, on far more joyful terms than what had surrounded her last delivery and the baby was in her arms.

Then, in 2020, the family dealt with another miscarriage where another boy was lost. Certainly, they were done having children, in Darr’s estimation.

However, a surprise was on her horizon. In 2021, Darr learned she was pregnant again. In preparation, she had a blood test done early in the pregnancy, around 10 weeks along. She was wholly expecting the results to come back indicating that she would be having her sixth boy. And, although she would have loved a little girl, Darr and her husband simply hoped for a healthy child.

“I was not expecting to ever have a daughter, I kind of closed the door on that. I was happy with our boys,” the mother of six said. “And after you have five boys, you’re like, Okay, I’m gonna have more boys.”

However, she was proved wrong one night at 11:00 p.m. when she read the emailed results of her blood test. Jordon was sleeping, and Darr wrangled with the decision: to open the email or not? Deciding to go ahead, she braced herself, preparing for whatever news might come. Then, to her shock, her computer screen stared back at her in a brand new shade: it was pink confetti, she knew just then that she was having a girl.

So great was the surprise, that Darr petitioned her ultrasound technician to confirm that the baby was really a girl. Contrary to old wives’ tales, Darr carried this baby just like she did all the others. Nothing indicated to her that anything would be different. So, she was slowly melting into the reality that she was going to have a daughter.

Finally, Darr’s baby girl was born in September 2021, in Chattanooga Tennessee, where the family had recently moved to. Darr breathed a sigh of relief when she heard her daughter scream.

“She’s here. She’s breathing, she’s alive.” Darr said. “And then when they put her on my chest, it was just like, pure bliss. And shock, shock that we had a daughter.”

The moment also had a bittersweet edge. Darr, the only daughter in her family, had recently lost her own mother, six weeks before her baby was born. Losing her mother and gaining a daughter was, for Darr, a “full circle” moment of grief and joy.

Faith to See It All Through

At the end of these difficult times, joy eclipsed her grief, and this was not without the help of Darr’s heavy leaning on prayer and her trust that God would lead her through.

“Just having someone to talk to and to pray to and to give me hope through the hard times, is really comforting because sometimes you don’t want to talk to a human being, and praying just gives me that outlet to be able to just think about it and to say crazy things that I’m thinking, you know, to God, and just to leave it there,” she said.

As someone who likes to control all details, she said that her eventual “motto” while going into pregnancies after losses was “let go and let God.”

Darr, who did not grow up with the beliefs she has now, says that she is learning with her own children as they grow up. She wants her children to grow up with a faith that she never had as a child. Learning to trust God is now a “whole family affair.”

Now, Darr and her husband are midstream, in the wild adventure of raising and homeschooling their six children.

Together, Darr and her husband work to keep the household moving with homeschool, housekeeping, meals, and children. The family began homeschooling four years ago, using the Catholic homeschooling program “Seaton.” While homeschooling has made life busier, it has also freed the family from imposed schedules and early mornings. Darr said that they are now in full control of their day, a wonderful reality when raising five boys—who don’t like to wake up early in the morning—and a baby girl less than 1-year-old.

Darr likes that her boys can learn at their own pace, and seeing them help each other through the day. She loves having them near. The boys love their autonomy—the freedom to choose what to wear and when to start their day or get a snack. The couple also sends the boys outside for an hour every day. No school, just play, giving them the opportunity to use their imaginations and explore freely in the sunlight.

The best part of raising her kids, Darr says, is that “there is never a dull moment. There’s always something happening.”

‘You Have to Push Through the Fear’

The cheerful clamor of Darr’s life today drowns out the sorrows of the family’s past. She knows it can be scary to proceed after one’s hopes are dashed. However, she still wants other people to know that forfeit doesn’t have to be the final destination; and that we need not barricade our hearts after disappointment. There is a way forward.

“When you lose a baby, you know people just want to shut down and never do it again,” she said. “And that’s just kind of like keeping your hearts safe. And I feel like there’s so much more ahead, but you have to push through the fear.”