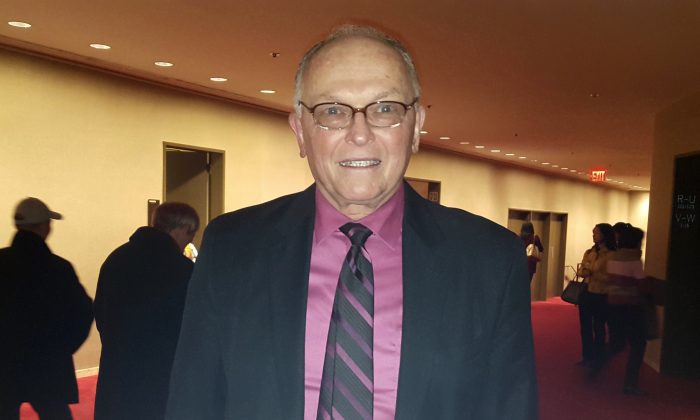 Kevin Kilgallen was inspired by all the extra intricate details he saw in Shen Yun Performing Arts at Lincoln Center on March 2, 2016. (Catherine Yang/Epoch Times)

NEW YORK—It’s the extra little things we do that show who we are, according to Kevin Kilgallen. It wasn’t enough that the artists of Shen Yun Performing Arts executed perfect leaps and flips or told stories of 5,000 years of China through dance—they went above and beyond with that “extra expert touch.”

“It inspired me to see that there’s no limit to how artistic someone could be,” said Mr. Kilgallen, an insurance agent, at Shen Yun’s opening night at Lincoln Center on March 2. And there was no limit for his praise of the artistic director of Shen Yun, for all the “intricate extra things” peppered into the dances, and the “many wonderful little things” that were too many to count.

“I used to be an athletic coach at West Point,” he explained. “A good coach, a good teacher, goes into extra detail about little things.”

The New York-based company had performed five sold-out performances at the venue in January, and is back for 12 performances at the David H. Koch Theater through March 13. On Wednesday night, the auditorium was full of laughter and applause as the audience saw a fresh take on China.

One of those wonderful extra touches Mr. Kilgallen saw was the use of humor in the dances, something that expertly brought the storytelling to life so “it wasn’t just plastic.”

In one dance, those touches had the audience laughing along with the Monkey King as he—playfully—caused a ruckus in the Dragon King’s undersea palace, on his search for a hero’s weapon. There was humor used to show how these people could laugh at themselves, and “it’s a quality that’s so important.”

He felt that detail demonstrated that, traditionally,  Chinese culture was “pleasant and modest and humble.”

Such expertise was also woven through the costumes of the dancers and the colors of the digitally animated backdrop, creating a soft and relaxing experience that was also fascinating and inspiring, for Mr. Kilgallen.

All this extra detail showed the audience the true culture of China, he thought.

“The non-Chinese people [in the audience], they realize that the Chinese are for real. They have a wonderful culture and they want to offer it to use. They’re not up there showing off themselves, they were offering, and they were so happy in what they were doing,” he said.

“They were giving,” he said. “When you’re caring, there’s love—you can’t care without love. And they showed care that they were giving.”

Arlynn Brody, a retired New York City school principal, said she felt a little bit enchanted watching Shen Yun. The performance brought her to China, to a culture so little known to Americans today, she said.

“This is 5,000 years of something Americans never see, never have any knowledge of this,” she said. The culture Shen Yun seeks to bring to the stage is the divinely inspired traditional Chinese culture, a culture from a time when the divine and mortal coexisted.

Ms. Brody was the principal of P.S. 87 in Middle Village, where she raised reading levels, brought in funding sources to create a bright environment, and worked to foster a collaborative atmosphere of support.

She felt Shen Yun was absolutely something educational and just perfect for students. The stories were universal, with themes like freedom that “resonates a lot with any culture.”

She said, for instance, that she personally loved the piece “Monks and the Red Guard.” The piece is set in the 1960s, when zealous young people were recruited to burn books and raze temples in the communist regime’s bid to uproot traditional culture. The story is an unexpected take on a dark period for many—playful monks with supernatural powers are featured in the tale, as well as a positive ending. Laughs could be heard throughout the theater during the piece.

“To find out that 5,000 year of culture have been lost right now in China, that was really surprising,” she said. She hadn’t known that “under the communist regime, history had been denied.”

But to see Shen Yun restore this culture, “I think that’s very noble.”

“That’s a noble cause, and I hope they can bring it home,” she said.

He, too, was grateful for Shen Yun’s mission to revive this culture,.

“This show makes you think about yourself, what you have inside, and how to express it in life,” he said. “It is very important, very important, not only for Asian people, but for everybody. Because it inspires you.”

Mr. Milanes said the performance inspired him to think more about divinity and in relation to himself, to focus on his inner self.

“Life is above everything,” was what Mr. Milanes saw deeply rooted in the performance. “We are so connected to the divine, we are together, we are connected. And no matter what situation you are in in life, that prevails, above everything.”