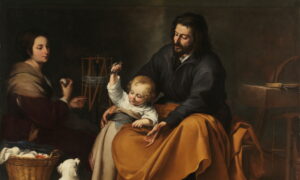 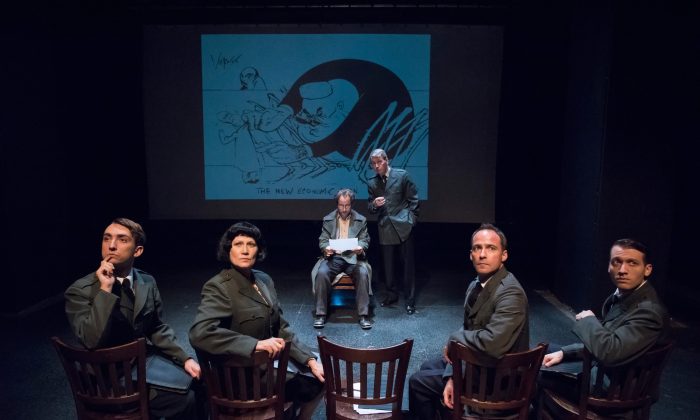 (L–R, Forefront)Soviet Comrades (Alexander Burnett, Valerie Leonard, Christopher Marshall, and Christo Grabowski). (L–R, Back) Cartoonist Bela Veracek (Alex Draper) and his cartoon (by Gerald Scarfe)are a little too direct in their political commentary, a point made by a Soviet officer (Jonathan Tindle) in “No End of Blame.” (Stan Barouh)
Arts & Culture

Theater Reviews: ‘No End of Blame: Scenes of Overcoming’ and ‘Good’

NEW YORK—Potomac Theatre Project is presenting in repertory two thoughtful productions that are timely and provocative. Both “No End of Blame” and “Good” offer protagonists undergoing moral struggles. Each, however, is at the opposite end of the moral scale.

In “No End of Blame,” Hungarian political cartoonist Bela Veracek (Alex Draper) holds on to his integrity that demands he draw only what he feels is right and true, even if it means losing everything that most hold dear: love, family, a comfortable home, and financial success.

Bela is not the most attractive of characters. In fact, the first scene finds him about to commit rape on a battlefield. His close friend Grigor (David Barlow) intercedes to save the woman, but Bela goes on to (perhaps) murder an enemy soldier. The incident is ambiguous as it takes place offstage, and Bela says afterward that he has only fired into the air.

Bela wanders the world seeking an absence of hypocrisy.

Later, Bela turns over his own wife (Stephanie Janssen) and child to Grigor so that he can seek artistic fulfillment.

Taking place from the end of World War I to the mid-1960s, Bela wanders the world seeking an absence of hypocrisy so that he will be free to create the biting, cynical drawings that depict his view of the world. He never seems to find it, except in a few, fleeting time periods.

A particularly strong episode takes place at the Writers’ and Artists’ Institute in Moscow. There a sympathetic committee interviews Bela, hoping he will to some degree bend his principles. But even though a forceful female comrade on the committee (Valerie Leonard) makes a strong pitch, Bela will not budge.

An interesting point is made regarding art. A painting can draw forth many interpretations, thereby letting each viewer come to his own conclusions, which may be extremely varied. On the other hand, a cartoon can have only one interpretation. Thus a cartoon has a directness about it and may even create problems for the cartoonist and/or his publication, in cases where an extreme political view is the issue.

Bela’s travels finally take him to London, where he lands a cushy job that lasts quite a while until the political climate changes. Then he is subjected to a humiliating conference involving his editor, himself, and the powers that be. After severe threats to close down the paper unless the content of Bela’s cartoons goes in a different direction, he must capitulate. He does so, with sorrow etched on his face.

In C.P. Taylor’s “Good,” John Halder (Michael Kaye), a German literature professor, is drawn into the Nazi machinery when some of his writings come to the attention of prominent Nazis. John has written a couple of novels, one of which deals with the problems of the senile elderly.

This situation holds personal interest for John, as his own mother (Judith Chaffee) is so afflicted. Their several scenes together are both moving and irritating, as she repeatedly demands help for minor or unpleasant tasks.

At play’s end, John sets out to accept an important post at Auschwitz, seemingly clueless as to the magnitude of his step.

John’s wife, Helen (Valerie Leonard), is neurotic, constantly doubting her own capabilities. These stresses make it only too easy for John to fall for the confident and very attractive young student Anne (Caitlin Rose Duffy). Their affair blossoms into an intense love relationship, and ultimately the two are living together.

Although in one sense John could not be happier, the stress of having three women demanding his attention makes him more vulnerable to the interest of the aforementioned politicos.

The important Eichmann himself (Adam Ludwig) demands an audience with John and urges him to interest himself in the Nazi project of how to eradicate, in a presumably painless way, certain elderly people who are no longer of use to themselves or to anyone else.

It is pointed out to John that even the Leader, Hitler (a nice turn by Noah Berman), has interested himself in John’s writings.

John, once having been close to his Jewish friend Maurice (Tim Spears), now refuses to help him leave Germany, as by now John has joined the Nazi Party and must be careful of the company he keeps.

It is becoming ever clearer that the Nazis have embarked on their Final Solution for the eradication of all Jews. At play’s end, John sets out to accept an important post at Auschwitz, seemingly clueless as to the magnitude of his step.

A program note by writer Hannah Arendt states: “This new type of criminal commits his crimes under circumstances that make it well-nigh impossible for him to know or to feel that he is doing wrong.”

Performances by Kaye, Spears, Duffy, and Chaffee are excellent, with strong support by others mentioned, plus Amanda Whiteley, Christo Grabowski, and Jesse Garlick.

Jim Petosa’s direction is oddly inconsistent, with many characters unnecessarily remaining onstage during others’ scenes, which, to me, made no point and was sometimes even distracting. But, overall, “Good” is strong, vital theater and is definitely apropos given today’s political climate in the United States.

Diana Barth writes for various publications, including New Millennium. She may be contacted at diabarth99@gmail.com